Like an open caisson, a well foundation built on the dry bed or after the sand island has been built. Wells can be dug on the river bank and floated to their final location if the water velocity is high and the depth is greater than 5 to 6 meters. When grounding a well, extreme caution is used to ensure that the well is in the proper position. Sandbags are placed around the well. Due to its weight, the well may sink 500 mm to 600 mm into the river. The procedure for sinking wells on the dry bed is identical to that of the wet bed.

END_OF_DOCUMENT_TOKEN_TO_BE_REPLACED

What Grillage Foundation?
Grillage foundations are made of one, two, or more levels of beams (usual steel) superimposed on a layer of concrete to distribute load across a large area. It is found at the bottom of the columns. These layers are concrete-encased and at right angles to one another. This foundation form commonly supports heavy building columns, piers, and scaffolds.

Even though foundation and grillage appear to be the same, they are not. Grillage disperses huge loads across broad areas, similar to how foundations distribute the load from the structure to the ground.

END_OF_DOCUMENT_TOKEN_TO_BE_REPLACED

Introduction
Ground Improvement in its broadest sense is the alteration of any property of a soil or rock to improve its engineering properties. This may be a permanent measure to improve the completed facility or a temporary process to allow the construction of a facility. Various processes of ground improvements are available to increase the strength, reduce compressibility, reduce permeability, or improve groundwater conditions. Further, if there is any foundation distress in the existing structures, in-place foundation treatment can be applied to rehabilitate the structure. The techniques involved in the attainment of the required improvement facilities are referred to as geotechnical processes.

Expansive soil or swelling soil are those soil that has the tendency to increase in volume when water is available and decrease in volume if the water is removed. Expansive soil is common in Africa, Australia, India, South America, Indonesia, Burma, and some countries of Europe. In India, nearly 20% of the total area is covered by expansive soil. The area includes the entire Deccan Plateau, Western Madhya Pradesh, parts of Rajasthan, Bundelkhand region in Uttar Pradesh, and parts of Andhra Pradesh and Karnataka. The expansive soil in India is commonly called ‘Black Cotton Soil’ because of its colour. The soil is most favorable for cotton growth.

The characteristic feature of swelling and shrinkage of the soil with respect to water is due to the presence of a clay mineral montmorillonite. Among all the clay minerals, montmorillonite has the largest specific surface. Due to the chemical properties and the structure of the mineral, a large amount of water and other exchangeable ions can easily enter between the layers causing the layers to be separated. Because of the affinity for water, clay soil containing montmorillonite minerals are susceptible to substantial volume change. They swell as soon as the water gains entry into the lattice structure and shrink if the water is removed. In moist state montmorillonite is highly plastic and has little internal friction. Its excessive swelling capacity may seriously endanger the stability of overlaying structures and road pavements.

How to identify?
In order to determine which soil type is expansive, some laboratory tests are available for this purpose. The commonly used methods are thermal analysis (DTA), X-ray diffraction method, and electron microscopy.

The DTA method is based on a certain characteristic reaction that takes place at specific temperatures for different minerals when these minerals are heated to high temperatures. It results in the loss of grain in heat. A soil specimen with the unknown mineral is heated continuously heated along with an inert substance in an electric oven. The record of change in temperature is plotted against oven temperature. By comparing with other available records of several known minerals it is possible to identify the type of minerals present in the given soil and their quantity is known.

Different minerals with different regular crystalline structures diffract X-Rays to yield different X-Ray diffraction patterns. With the help of the patterns obtained, it is possible to tell which types of minerals are present in what proportions.

In electron microscopy, the soil is observed under polarized light in an electron microscope. It requires both skill and experience. With the help of certain characteristic stains, the nature of present clay minerals is known. This method is mostly used to supplement other test data.

A low value of safe bearing capacity is recommended apparently because of poor performance of the foundation due to poor supporting power of soil. Foundation designed for such small bearing pressure is totally unable to counteract the swelling of the expansive soil. It is shocking that it is seldom that heavily loaded structures have problems with swelling soil while the lightly loaded structure with single and two storeyed building experience maximum damage.

The important factor which influences the expansive soil is swelling pressure. It indicates the property of the soil. From the below table of swelling potential, we can easily identify the soil as swelling type or not.

Methods of Foundation Practices:
The following important methods are adopted while constructing foundation on expansive soils.

Footing with special cushions
In this method, excavation is carried out up to a depth of greater than the depth of foundation. After that freely draining soil such as mix of sand and gravel is filled up and compacted up to the base of foundation level. Reinforced concrete footing is constructed at this level and brick wall may be constructed over the footing. Mixture of sand and gravel is filled up loosely over the footing. This cushion of granular soil absorbs the effect of swelling and so its effect on foundation will considerably reduce. 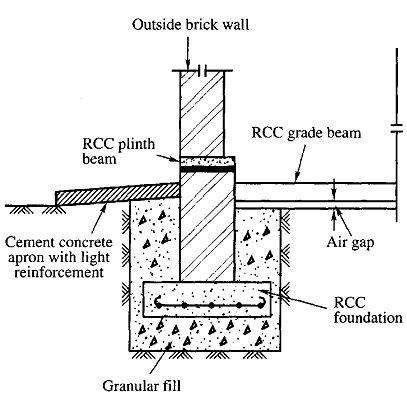 CNS-MSM Technologies
CNS Technology or the concept is based on self-equilibrating phenomenon with a difference that clay minerals present in CNS are non-expanding such as kaolinite, chlorite etc. The thickness of CNS needed to prevent transmission of swelling pressure and heave to the foundation. CNS can be obtained as a natural material or can be made produced by blending two or more materials.

In MSM Technology, to improve the bearing capacity of the system the layer of Mechanically Stabilized Mix is intercepted over CNS intercepting layer. Normally MSM consists of graded aggregate, sand and fines with more plasticity, similar to that allowed in water bounded macadam mix. 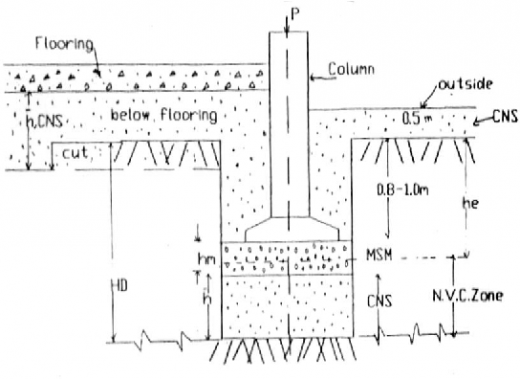 Strip footing
It was found that conventional strip foundations with sand cushions were inadequate reinforcing the shallow strip footings was tried and inverted “T” foundation is commonly used. The common types of strip footings that have been used for light buildings are- 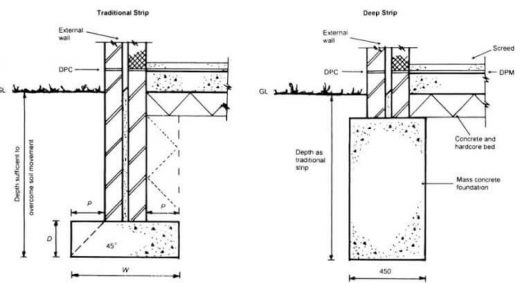 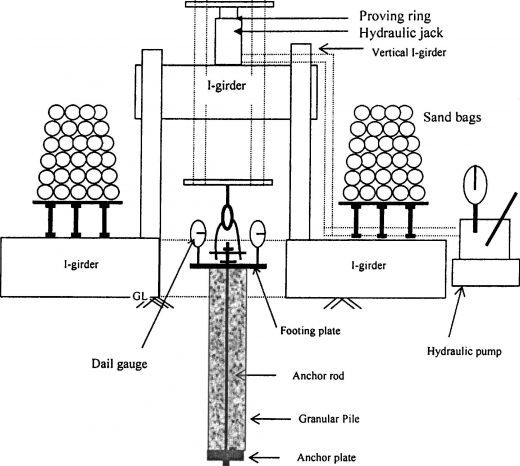 Stiffened mat foundation
The common method of stiffening consists of a slab cast beams 3-4 meters apart both longitudinally and laterally. The rigidity of mat minimizes distortion of the superstructure from both horizontal and vertical movements of the foundation soil. Differential heave also reduced when stiffness of slab and superstructure is increased.

Chemical stabilization
Phosphoric acid combined with wetting agent can be used for stabilization of expansive soils. Because it reacts with clay minerals and forms insoluble aluminum sulphate which serves as a moisture proof. Some chemicals such as sodium silicate, alkyl chloro silanes, siliconate amines, chrome lignin can be used for the water proofing of soils. The soils treated with calcium carbide do not easily pickup water as it is deliquescent and hygroscopic. When sodium chloride is added to the soil crystallization occurs in the pores of the soil and it forms a dense hard mat. So absorption of moisture is prevented.

Moisture control
Swell and shrinkage can be reduced if water is prevented from moving into soil under and near the building post construction. For this purpose, moisture barriers are placed around the perimeter of the building. They efficiently reduce the variations in water content and differential heave. 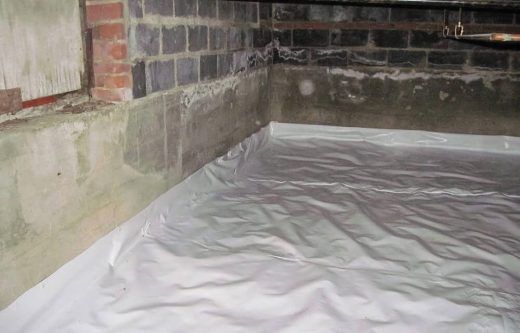 The method consists of inducing impact by striking a plate on the soil with a hammer or generating shock by exploding a small charge at or near the ground surface. It radiates the shock waves which are recorded by a device called a geophone. The geophone records the time of travel of the waves. These are installed at suitable known distances on the ground in a line from the source of shock. Some of the waves known as direct or primary waves travel directly from the shock point along the ground surface. These waves are first picked by geophones. The other generated waves travel in a downward direction at various angles to the horizontal. These waves get refracted at the interface of two soil strata if they travel into a stratum at different seismic velocities. These waves are picked up by geophones. As the distance between the source of shock and the geophones increases, the refracted waves reach the geophone earlier than the direct waves. By knowing the time of travel primary and refracted waves at various geophones, the depth of various strata can be evaluated by preparing distance-time graphs and analyzing them.