Introduction:
This project is also a part of the 700 km Mumbai-Nagpur Expressway project. The longest tunnel is coming up on “Hindu Hridayasamrat Balasaheb Thackeray Maharashtra Samruddi Mahamarg” at Igatpuri in Nashik. The tunnel will connect Tarangpada village in Nashik to Vishala village in Nashik of Maharashtra. The length of the tunnel is 7.78 kilometers. It will be another point of attraction in Maharashtra besides the tourist hotspot of Igatpuri in Nashik district. The tunnel will reduce the vehicular congestion significantly and also cut the time travel between Mumbai and Nagpur from 14 to 15 hours to 8 to 9 hours.

END_OF_DOCUMENT_TOKEN_TO_BE_REPLACED

Introduction:
In recent years, the construction of Glass Bridge has been developed. Glass bottomed and transparent architectures have attracted the attention of the public and it continuously brought benefits to tourist’s areas. It gives tourists beautiful visual experiences and great views of rivers and mountains in that area. The glass structured architecture deepened such perceptions of tourists and it became an adventure and expedition. Glass structured architecture uses their viewing platform or the function of the walking trails and the special performance of the glass integrates various design expressions.

END_OF_DOCUMENT_TOKEN_TO_BE_REPLACED

Introduction
The Opus is a tower designed by the highly successful Iranian-born British architect Zaha Hadid. The new design of this tower was unveiled in the United Kingdom in May 2007 at a ceremony held at the British Museum and was completed in 2017. It is located in Dubai, UAE, and it is 84,345 sq.m of area. This tower is a joint effort of Zaha Hadid, Patrik Schumacher, and Christos Passas, and the name of the project is ME Dubai hotel, Opus. Christos Passas was the ZHA Design Director. The design team consisted of Vincent Nowak (Project Architect), Javier Ernesto-Lebie, Dimitris Akritopoulos, Paul Peyrer-Heimstaett, Sylvia Georgiadou, Marilena Sophocleous, Phivos Skroumbelos, Chiara Ferrari, Thomas Frings, Jesus Garate, and Wenyuan Peng. The local architects involved in this project were Arex Consultants (Dubai) and BSBG (Dubai).

END_OF_DOCUMENT_TOKEN_TO_BE_REPLACED

Introduction
On 5th April 2021, Indian Railways completed the construction of the World’s highest railway bridge. This bridge is located in the union territory of Jammu and Kashmir and is a part of the Udhampur-Srinagar-Baramulla rail link project (USBRL). The length of the bridge is 1,315 meters, and it stands 359 m above the riverbed, which makes it the world’s highest railway bridge.

In July 2008, the bridge’s construction was stopped after concerns about its safety and alignment were raised. A seven-member expert committee led by former Chairperson of the Board of Railways, M. Ravindran, had been established to deal with the issue. After so many alterations and testings, the construction of this bridge was finally completed making it the tallest railway bridge in the world.

END_OF_DOCUMENT_TOKEN_TO_BE_REPLACED

Introduction:
It is a grand development project of buildings that will be the future power corridor of India. It will have a new parliament building, a common central secretariat and a revamped three km long Rajpath from the RashtrapatiBhavan to the India Gate. It covers conversion of North and South Blocks to publicly accessible museums by creating a new Common Secretariat to house all the ministers. The project is to be completed by 2024. The project also includes building of a new parliament building near the existing one with increased seating capacity for future expansion. 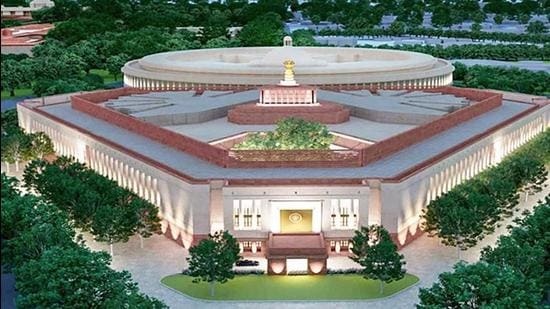