Keywords: planimeter, Computation of area, zero circle
Instrumental methods are one of the important technique uses to determine area of a plot. The other methods for area computation are using field notes and from previously plotted plan. We have already discussed them here.
Computation of areas and volumes | Computation of Area from Plan

Significance of Planimeter in Area computation
The planimeter gives more accurate (within one percent) results compared to the other methods except by direct calculation from the field notes. It is used for determining the areas of figures plotted to scale, especially when the boundaries are irregular. Example for such plots are, plot with irregular boundary and plot having a river as boundary on one side. 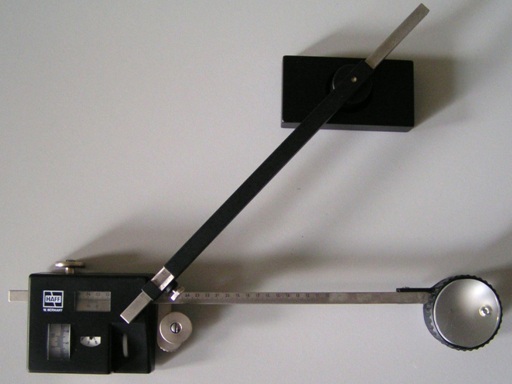 The other arm(called the tracing arm) carries a tracing point, which is moved round the boundary of the area to be measures. A wheel whose axis is parallel to the tracing arm measures the area of the plot.

The planimeter is connected on three points such as the anchor point, the tracing point and in the periphery of the wheel. When the tracing point is moved around the outline of the plot figure, the graduated wheel partly rotates and partly slips. This is because the normal component of the motion causes rotation, while the axial component of the motion causes slip. But this slip does not affect the reading. The total amount of rotation of the wheel measures is the total normal displacement. Thus the complete area is covered in this process.

Actual methods and procedure for the measurement of area is discussed in the next article. Check it out here.