Home Soil Engineering
What are the measures to reduce the effects of soil liquefaction?

To reduce the effect of soil liquefaction, it is intended to reduce the pore water pressure induced during earthquake shaking. This can be achieved by providing better drainage in soils (e.g. wick drains, sand drains etc. ) and densification of soils (e.g. vibroflotation, dynamic compaction etc.).

Liquefaction hazards can be reduced by improving the drainage ability of the soil. If the pore water within the soil can drain freely, the build-up of excess pore water pressure would be reduced accordingly.

0 Comments
Does liquefaction occur to sand only?

In liquefaction, the pore water pressure builds up steadily and eventually approaches a value equal to the confining pressure. In an earthquake, however, there is not enough time for the water in the pores of the soil to be squeezed out. Instead, the water is trapped and this avoids the soil particles from moving closer together. Consequently, this results in an increase in water pressure which reduces the contact forces between the individual soil particles, thereby softening and weakening the soil. Eventually, soils particles lose contact with each other and behave like a liquid.

Hence, the type of soils which is susceptible to liquefaction is the one like sand whose resistance to deformation is mobilized by frictional forces between particles under confining pressure. In case the soil is fine grained, cohesive forces tends to develop between these fine particles and it is difficult to separate them. Therefore, sand with increasing content of fines tends to increase its resistance to liquefaction.

The consequence of liquefaction is that the subsequent settlements after liquefaction may damage the overlying structures. Moreover, for sloping ground lateral flow may result which is undesirable. Liquefaction only occurs to saturated soils.

This question is taken from book named – A Self Learning Manual – Mastering Different Fields of Civil Engineering Works (VC-Q-A-Method) by Vincent T. H. CHU.
0 Comments
Can grout be utilized in providing tensile resistance of soil nails?

The passive nature of soils nails requires a small movement for the nails to take up loading. During this process, it is understood that the grout annulus around the nail would crack to allow for these small displacements.

Therefore, the tensile capacity of grout is normally ignored in design and only compressive capacity might be considered. 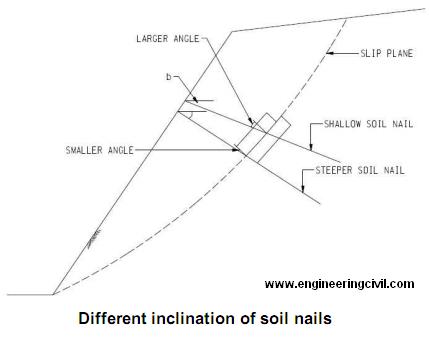