This junction is spread across 30 acres and has 18 routes which include slip roads ( 4km or 2.5 miles). It has a total of 559 concrete columns and passes over two railway lines, three canals, and two rivers 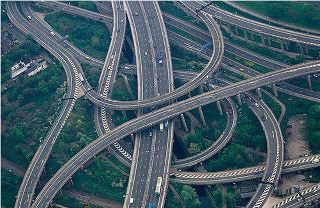 The construction work started in 1968 and was completed in May 1972 and till date its considered as one of the most complicated road network in world.


We at engineeringcivil.com are thankful to Sir Thomas for submitting this Civil Engineering Wonder information to us.

India, a developing country has world’s third largest road network but when we talk about expressways, we can hardly name a few like Mumbai-Pune Expressway and Delhi-Gurgaon Expressway. So we decided to tell you about some of the other expressways in India.

Here is the list of India’s top 11 Super Expressways

2) Mumbai-Pune Expressway
Mumbai-Pune Expressway (official name is the Yashwantrao Chavan Expressway) is 93 km long and is considered as one of the best expressways in India. It is India’s first six lane high speed expressway and was made by Maharashtra State Road Development Corporation (MSRDC) at a staggering cost of Rs 1,630 crore (US$363.49 million). It was opened to public in April 2002

4) Allahabad Bypass
Allahabad Bypass covers a distance of 86 km and is one of the most remarkable achievements of the Golden Quadrilateral project. It connects India’s four main metropolians New Delhi, Kolkata, Mumbai and Chennai.

We have many more expressways in India which are under construction or are already approved but work has not started yet. But still India needs many more of those expressways, to reduce the traveling time and for better connectivity across other Indian cities and states.

With aspiration of becoming a global superpower, India’s construction industry is now thinking beyond the box. Mumbai Worli Sea Link as one of the biggest achievements has boosted the construction industry and now they are building world’s highest railway bridge over Chenab in Reasi in Jammu between two villages Bakkal and Kauri.

The 1.3 km, 359 meters from the river bed is nick named as Sky Bridge and is part of the 73 km Katra-Dharam section of the Udhampur-Srinagar-Baramulla Rail Link USBRL project.

Some facts about this Bridge
1) It will be 19 m higher than the currently tallest rail bridge i.e the bridge on France’s Tarn River (340m)
2) It will be 35 m taller than the Eiffel Tower in Paris.
3) It will be six times the height of the Panvalnadi bridge in Maharashtra which is considered asthe tallest so rail bridge in India so far

The construction details and photographs of this bridge are awaited.

We are very thankful to Er Vipun Paul for submitting this useful information to us.

The Akashi-Kaikyo Bridge also popularly known as the Pearl Bridge, has the longest central span of any suspension bridge. The central span is staggering 1,991 metres (6,532 ft) making it a truly marvelous civil engineer wonder. Located in Japan, Akashi Kaikyo Bridge was completed in 1998 with the purpose of linking the city of Kobe on the mainland of Honsho to Iwaya on Awaji Island by crossing the busy Akashi Strait.

END_OF_DOCUMENT_TOKEN_TO_BE_REPLACED

On 4th Jan 2010, the biggest civil engineering marvel was inaugurated with a spectacular display of water, sound, light, and fireworks.

The biggest marvel which has amazed one and all has been in minds of not only civil engineers but also in the minds of common people. The world’s tallest building is being unveiled in the middle of the a huge financial crises but this has not marred the spirit of Dubai.