Introduction
The Opus is a tower designed by the highly successful Iranian-born British architect Zaha Hadid. The new design of this tower was unveiled in the United Kingdom in May 2007 at a ceremony held at the British Museum and was completed in 2017. It is located in Dubai, UAE, and it is 84,345 sq.m of area. This tower is a joint effort of Zaha Hadid, Patrik Schumacher, and Christos Passas, and the name of the project is ME Dubai hotel, Opus. Christos Passas was the ZHA Design Director. The design team consisted of Vincent Nowak (Project Architect), Javier Ernesto-Lebie, Dimitris Akritopoulos, Paul Peyrer-Heimstaett, Sylvia Georgiadou, Marilena Sophocleous, Phivos Skroumbelos, Chiara Ferrari, Thomas Frings, Jesus Garate, and Wenyuan Peng. The local architects involved in this project were Arex Consultants (Dubai) and BSBG (Dubai). 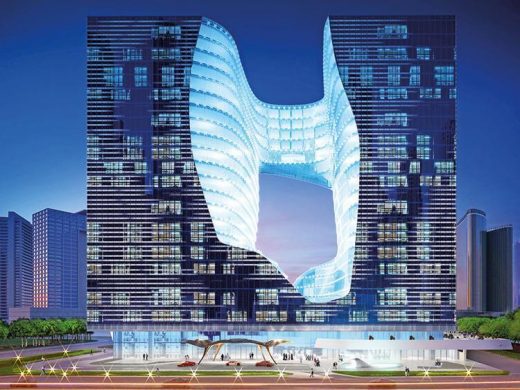 Inside The Opus, there is a hotel, 12 restaurants, a rooftop bar, and 56,000 square feet of office space. It has been recognised as a Best Tall Building under 100 meters 2019 Award of Excellence. The companies involved in this project are BG & E, Multiplex, AESG, Ramboll Group, Koltay Façades, Hirsch Bedner Associates, Design Confidence, Alu Nasa, DPA Lighting Consultants, Illuminate Lighting Design, Al Turath Engineering Consultants, Al Nasr Contracting Co. and so on. The height of this tower is 93 m (305 feet), and it consists of 21 floors.

Its Design
The Opus, located in Dubai’s Burj Khalifa neighbourhood, comprises two independent towers that come together to make a single whole in the shape of a cube. The cube is then carved, resulting in a central void that functions as a separate volume within the building, enabling views to the exterior from the centre. The void’s 6,000 square metre façade is made up of 4,300 individual flat, single-curved, or double-curved glass units that were built using digital 3D modelling that also identified certain zones that required tempered glass. The two towers are connected at ground level by a four-story atrium and a 71-meter-high asymmetric 38-meter-wide three-story bridge. These ties bind the two towers together, forming a single cube with the emptiness at its centre. To achieve this, the firm used a combination of a glass of varying thicknesses, bent in various ways, and fitted using a variety of processes to detail the “void’s surface. One of these methods involved heating glass to temperatures as high as 1,300 degrees Fahrenheit before forming it and then rapidly cooling it to boost its breaking strength.

The tower’s eight-storey void free-form fluidity contrasts sharply with the surrounding cube’s strict orthogonal geometry, which is a perfect example of modern architecture. This building is also known as the ME by Melia hotels and is characterised by the progressive, design-driven approach. Melia Hotels International, one of the world’s leading hoteliers with over 350 hotels in 39 countries, operates it. 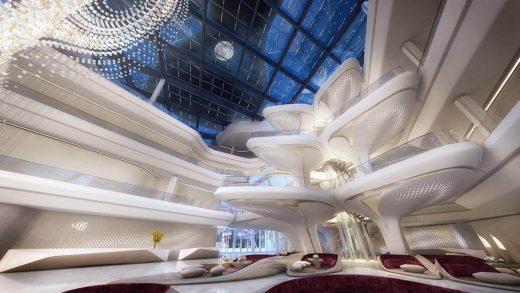 An 8mm low-E glass (coated on the inside), a 16mm cavity between the panes, and two layers of 6mm clear glass with a 1.52 mm PVB resin laminate make up the high-efficiency glazing modules of this building. For this building, digital 3D modelling was used to create the curved façade, indicating certain zones requiring tempered glass. The building’s cube façade reflects the sky, the sun, and the surrounding city during the day and at night, a dynamic light system of individually controlled LEDs within each glass window illuminates the emptiness.

The Opus has 74 rooms and 19 suites, as well as office floors, serviced residences, restaurants, cafes, and bars. Zaha Hadid design furniture is installed throughout the hotel, including the petalinas sofas and ottomans pods in the lobby, which are materials with a long lifecycle and can be recycled. Each bedroom has an opus bed, while the suites have a work & play combination sofa with a workstation. The vitae bathroom collection, designed by Hadid in 2015 for noken porcelanosa, was also featured in the hotel’s bedrooms, continuing her fluid architectural language throughout the hotel’s interiors. There are sensors throughout the Opus that control the ventilation and lighting based on occupancy to save energy.

From its beginnings as a business structure, The Opus has evolved into a true mixed-use development. Working under a Design & Build contract, the organisation was also the Architect of Record and technical supervisor of construction, providing lead consultant and executive architecture solutions. Advanced 3D software was employed to model in detail the complicated geometry between structural steel, façade elements, and access provisions to facilitate design development. The Morpheus in Macau, designed by ZHA, is another hotel with a curved void. The Morpheus has three holes in the middle, which is made of a unique exoskeleton architecture that keeps the hotel interiors free of supporting walls and columns.

Conclusion
This tower is a landmark not only in Dubai but in the world because of its structure and unique design. Zaha Hadid and his team have brilliantly executed the project with utmost precision and accuracy. The hotel ME Dubai by Melia in the Opus by Omniyat skyscraper in Downtown Dubai opened four years after it was initially scheduled to open, right before closing for two weeks due to the city’s lockdown. But quickly after the lockdown, Dubai was able to regain attraction and tourism. Dubai has become a virtual playground for architects who want to put their wildest dreams to the test over the last two decades. And no architect has perhaps explored the potential curve of an angle more than the late Zaha Hadid. It is indeed an inspiration for various blooming architects, structural engineers, designers and developers.