Introduction
On 5th April 2021, Indian Railways completed the construction of the World’s highest railway bridge. This bridge is located in the union territory of Jammu and Kashmir and is a part of the Udhampur-Srinagar-Baramulla rail link project (USBRL). The length of the bridge is 1,315 meters, and it stands 359 m above the riverbed, which makes it the world’s highest railway bridge.

In July 2008, the bridge’s construction was stopped after concerns about its safety and alignment were raised. A seven-member expert committee led by former Chairperson of the Board of Railways, M. Ravindran, had been established to deal with the issue. After so many alterations and testings, the construction of this bridge was finally completed making it the tallest railway bridge in the world. 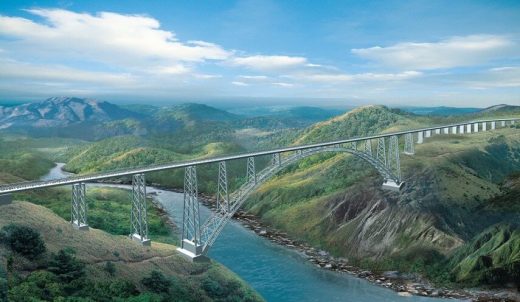 The bridge’s arch and piers are composed of steel trusses, while the foundations and approach viaduct piers are made of concrete. The bridge is built on Himalayan bedrock with foundations that are roughly 40 meters high and 50 meters wide. The arch is erected using a cableway crane, following which the deck is launched into place, and the 600,000 bolts are used to assemble the joints.

The Design
This bridge is expected to last around 120 years since it was constructed with utmost strength. The arch of the bridge was considered the most challenging part to build, and so it took many years for designers actually to come up with a robust and sturdy design. The main arch of Chenab Bridge has many steel boxes and is designed in such a way that it can bear a wind speed as high as 266 kilometers per hour. It was designed in consultation with DRDO keeping in mind the blast load. It can take an earthquake force having an intensity as high as Zone 5. 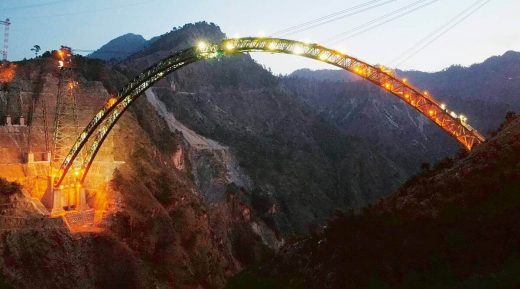 Despite various preventive measures in design, this bridge is operated at a restrictive speed of 30 kilometers per hour even after one pier/trestle has been removed. AECOM was responsible for proofreading the design and drawings, as well as providing supervision and technical guidance at the construction site. The bridge has been strengthened with 63 millimeters thick special bomb-proof steel and concrete that can survive explosions in a zone prone to terrorist attacks. Additional protection has been provided by implementing internet warnings, a ring of aerial security, and a monitoring system on the bridge.

Building Information Modelling (BIM) software such as Tekla structures has been used to design this building. This software has helped Engineers in monitoring temporary cables, structural health, and related anchoring tower. This software has also helped in geometry and quality control, erection sequence planning, and workshop drawings. 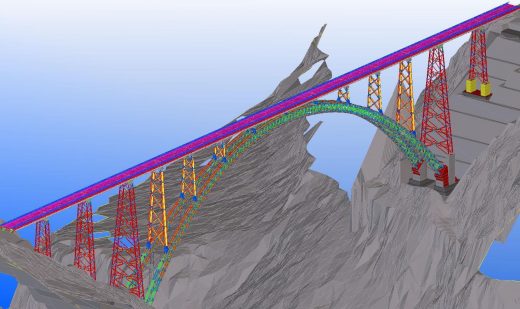 Regarding the approval, Konkan Railways Corporation was required to use 3D modeling as visualized 3D models are more practical to present than 2D drawings. Tekla Structures was chosen by WSP Finland, the project’s design consultant, because it allowed the company to organize plate material for better logistics in the rugged terrain and made it easier to gain approval from local authorities. Moreover, Tekla structures provided the required efficiency, optimization with a wide range of connections, and automated conflict control. The 3D model generated data for material amount take-off, assembly dimensions, and center of gravity for lifting and transportation. The high degree of development and accuracy of the model permitted the use in temporary workshops on-site for manufacturing.

The Testing
The Phased Array Ultrasonic Testing machine was utilized for the first time on Indian Railways to test welds. The National Accreditation Board for Testing and Calibration Laboratories (NABL) approved a facility construction for the first time in history on the site for weld testing. Comprehensive health surveillance and warning systems through state-of-the-art devices were implemented to ensure safety at the highest level. 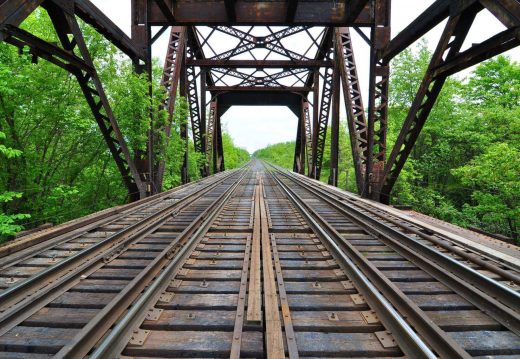 Other testings were carried out by the team of IIT Delhi ??headed by Prof KS Rao, Panjab University, Professors from IIT Mumbai, an Austrian consultant, and two designers hailing from the US and Finland as a part of a global designing consultancy firm WSP. The bridge was expected to be completed by 2016 but due to several complications, the inauguration was delayed.

Conclusion
This bridge is considered to be a landmark in the world of civil engineering due to the fact that despite so many challenges, the bridge was successfully completed. It took 13 years to recalculate any anomalies arising due to the location, surrounding loads, moving objects, wind phenomena, natural events, and many more. However, the arch was the crucial part that needed much attention as it stood at the edge of the two mountains and supported the railway line solely. This is a great achievement for India and it stands as an inspiration for the upcoming Engineers to build such a challenging design amidst natural catastrophes.