What is Spread Footing?
Spread footings are commonly utilized to support each column of a building and the piers of a bridge. Construction of these footings is both cost-effective and economical. It works well in any soil with sufficient load-bearing capacity. Spread footing comes in various forms and sizes, including square, round, and rectangular. With stresses applied upward, this footing can operate as an inverted cantilever.

For the construction of spread footings, structural design codes and specifications assume a linear soil pressure distribution. As a result, designing spread footing is a lot easier.

Spread Footing Foundation:
Residential constructions frequently use spread footing foundations. This foundation “spreads” the structure’s weight across a larger area to spread the load coming through the load-bearing over a larger area and increase the building’s stability. Due to some unfavorable conditions, the design and layout of spread footings are regulated. Some situations may exist, such as soft soil beneath the building or a change in soil volume due to frost penetration.

Types of Spread Footing Foundation:
A spread foundation is built to support each column individually in the case of bridges. Following are some of the types of the spread footing foundation.: 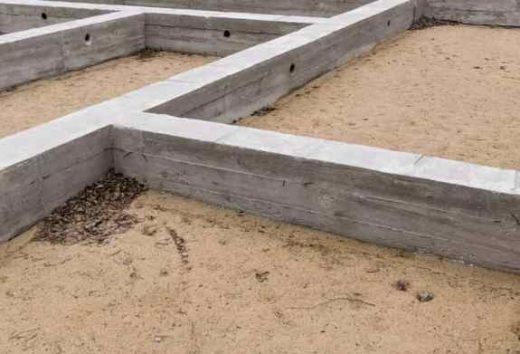 Strip footing is another term for wall footing. The load is transferred from the building to a vast land area by a continuous strip of concrete in this footing style. This footing is made by increasing the thickness of plain concrete or reinforced concrete, depending on the load-bearing wall. Using stone, brick, plain concrete, or reinforced concrete to make a wall footing.
Pad spreads and strip footings are the most common wall footings used in homes. It provides a strong foundation for structural and non-structural walls by conveying loads to the structure. 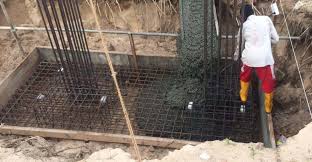 A combined footing is used when two or more columns in a straight line are borne on a single spread footing. The most cost-effective option is to use isolated footings for each column. Combined footings are only used when essential, such as building a house.

The combined footing is usually reinforced concrete because it is expected to be inflexible and rest on uniform soil. Individual footings and soil with limited load-bearing capability necessitated additional area, which was excellent conditions for the building’s combined footing.

3. Isolated Spread Footing or Column Spread Footing:
The solitary or individual footing that transfers the load to the subterranean earth is isolated. It is used when only a single column is required. The substructure component that makes direct touch with or is resting inside the earth is known as the foundation. 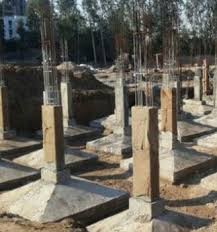 Isolated footings are cost-effective, simple to install, require minimal excavation, and are simple to construct. When there is a large distance between columns, an isolated footing is one of the most commonly utilized foundations in the building business. It is used when the soil’s geotechnical qualities do not change significantly in the foundation area. It is also the most financially advantageous type of foundation.
An isolated footing can be further divided into three types:
i) Stepped Footing
ii) Sloped footing
iii) Simple Spread Footing 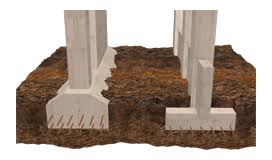 This form of footing can support more than two columns. The load from each column is transferred directly to the footing in this sort of footing. Continuous footing is when a longitudinal beam connects the column’s footings.
In earthquake-prone areas, the continuous footing is commonly used. During a natural disaster, this style of footing can be a compromise against mobility. Its purpose is to keep the constitutional movement from jeopardizing and maintaining stability. 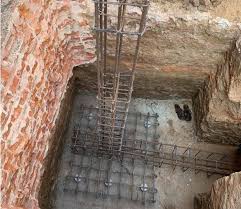 The cantilever or strap footing connects an eccentrically laden column to the column’s interior. In contrast, the strap transmits the moment induced by the eccentricity to the interior columnar foot, resulting in consistent soil pressure under both footings.
Suppose the distance between the columns is large or the permitted soil pressure is high. In that case, strap footing could be utilized instead of rectangular or trapezoidal joint footing in situations where extra footing space is not required. 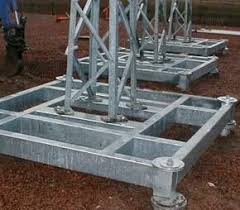 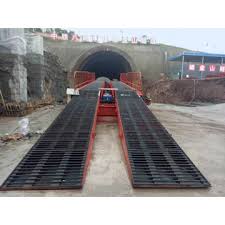 Inverted Arch Footing was once utilized as a foundation for multistory structures. This foundation form is employed when the soil’s carrying capacity is low, and the structure’s weight is carried to the footing via the walls. Where there is a concern, deep excavation can also be done. 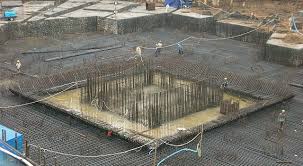 Conclusion:
Spread footing is a form of foundation designed and built to hold up superstructure elements like steel or concrete columns, walls, and so on. It is the most general construction used to keep a structure from sinking into the earth. Compared to other foundations, it has a lower construction cost and more simple quality assurance and quality control method.