A vertical portion with an effective length is three times the vertical member’s length. A column is a structure capable of sustaining compressive stresses with the minimum lateral dimension. From beams or slabs to footings or foundations, columns carry loads. In the case of frames and trusses, struts are slanted members that carry compressive loads. The pedestal is a vertical compression part less than three times the column’s length in effective length. Its lateral dimension is the smallest.

Columns carry axial loads; hence they are intended for compression. The columns can bend due to additional factors such as snow, wind, or other horizontal forces. The columns were designed to handle Axial Load and Bending. 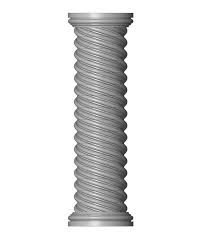 Spiral columns use spirals to retain the primary longitudinal reinforcement in place and increase the flexibility of the column before it fails. Significant yielding is present in the spiral columns, followed by deformation before ultimate failure. Spiral columns give you a warning before they fail, allowing you to take preventative action.

Tied Column:
A tied column is one in which smaller diameter transverse bars, commonly known as ties, attach the reinforcing bars at regular intervals. The major purpose of the ties is to maintain the longitudinal bars vertical while they are built. It also contributes to the column’s buckling resistance. When a tied column fails, the concrete crushes and shears outward. The longitudinal steel bars buckle outward between the ties, causing the column to collapse unexpectedly. A tied column is used when the reinforcement is in type. Steel ties are used in tied columns to keep the main longitudinal bars of the columns stable. Ties are usually evenly spaced along with the column’s height. 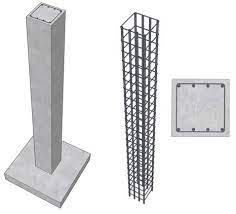 Every corner and adjacent longitudinal bar should receive lateral support from the corner of the ties. The top tier should be within 75 mm of the lowest horizontal Reinforcement where the beams are all bracketed, and there is concrete confinement at the top of the column on all four sides.

The following conditions must be followed when using tied reinforcement for compression members: The ties must be half tie spacing above the floor for footing and half tie spacing below the slab’s lowest horizontal reinforcement, just like a tied column. The primary structural members utilized to limit the masonry wall and boost its horizontal and vertical load-bearing capability are tied columns.

Tied brick columns are used in construction because of their architectural attractiveness—this column type is fit for corner pillars, porch columns, boundary gate pillars, and other constructions. The side brick column is easy to build, quick, and inexpensive.