Abstract
This study introduces a new approach for seismic assessment of existing school buildings. The proposed approach requires minimum human effort as it can be implemented by a small team of technical construction background. The approach is based on EMS-98 scale in addition to rapid survey of architectural and structural elements of existing school buildings. The study uses 64 selected public school buildings sampled from a total of 364 schools in Gaza Strip. The results showed that 50% of the surveyed schools are classified as Vulnerability class B, while 20 % are classified as Vulnerability Class A. The results were verified using the ‘probability matrix damage’ approach and showed good satisfying convergence. The results of the study are beneficial for the responsible parties who are expected to take appropriate actions related to enhancing seismic performance of Gaza Strip schools against seismic activities, due to the fact that these school buildings not only host about 450,000 students and teachers, but also serve as emergency shelters for those who lose their homes as a result of political instabilities in the region.

1. Introduction:
School buildings have often collapsed during earthquakes. The 2001 Bhuj earthquake in India killed 1002 students and teachers, the 2005 Kashmir earthquake in Pakistan killed about 19,000 children, most of them in collapses of school buildings, and the 2008 Sichuan, earthquake in China destroyed about 6,898 schools killing thousands of students and teachers (López et al., 2008). In Palestine, earthquakes occur frequently where some Palestinian cities were damaged during the past hundred years. Seismicity in Palestine is mainly affected by the geodynamic processes acting along the Dead Sea Transform. The Dead Sea Transform is a left-lateral fault between the Arabia and the Sinai tectonic plates (Al- Dabbeek and El-Kelani, 2008, Fruend et al., 1968, Garfunkel, 1981, Ginsburg et al., 1981, Quennell, 1959
and 1983).

Seismic vulnerability is a measure of how susceptible a building is to damage for a given severity of the ground shaking (Borzia, B., Pinhob, R. and Crowleya, H., 2008). The building vulnerability is due to older building design codes, poor design practices and poor code enforcement (Solomn and Zheng, 2010 and Jalayer et al., 2010).A number of procedures have been outlined in the literature. The simplest and quickest way, called walk-down survey, requires only superficial data collected from a brief inspection of the building. The number of stories, vertical and plan irregularities, location of the building, age of the building, its structural system and apparent material and workmanship quality are typical parameters that are used. The purpose of rapid evaluation is to identify or rank highly vulnerable buildings that deserve further investigation. The screening method is performed without any structural analysis and takes little time to complete. Basic structural hazard scores for various building types are provided on the Rapid Visual Screening form (Aftabur and Shajib, 2012). More refined methods which include detailed analysis and take more time than Rapid Visual screening are used for the evaluation of individual buildings only. In addition, these methods can be used for rapid screening of hazardous buildings (Grandori, 1982 and Yakut, 2004).

Al-Dabbeekand El-Kelani (2008) carried out a rapid seismic vulnerability study of three Palestinian refugee camps in the West Bank, based on EMS, 1998 and FEMA 310 provisions. The results of the study showed that very heavy structural and non-structural damages to buildings in these camps are expected under the influence of moderate to strong seismic activities. Al-Dabbeek (2007) studied vulnerability, and expected seismic performance of buildings in the West Bank. Seven regions that represent the West Bank were investigated by collecting information based on site conditions, regularity and configuration of structural and architectural elements of buildings, adjacency, construction material conditions, etc. The collected data and analysis were determined according to European Macroseismic scale 1998 (EMS) and calibrated using Japanese qualitative method. The results showed that one third of the investigated buildings belong to seismic vulnerability of class A (heavy damage), whereas about 40 percent of the buildings indicate class B (moderate damage (. Lazzali and Farsi (2012) used the European Macroseismic Scale EMS-98 to define the relationship between damage and macroseismic intensity to assess the seismic vulnerability of buildings in Algiers area. Results lead to the conclusion that Algiers buildings have an average vulnerability class B. Panahi et al. (2014) evaluated the seismic vulnerability of school buildings in Tehran city based on the analytic hierarchy process (AHP) and geographical information system (GIS). The results indicated that only in 3 % of the school buildings in the study area the destruction rate will be very high and therefore need to be reconstructed. Sobaih and Nasif (2012) evaluated the seismic vulnerability of existing reinforced concrete school buildings in Egypt using a methodology that is based mainly on questionnaire forms and a computer program in order to execute the methodology.

In this study, a new approach for seismic assessment of existing school buildings in Gaza Strip has been developed, based on European Macroseismic Scale (EMS-98) scale and available literature and depends mainly on rapid survey of school building architectural and structural elements. The importance of this study stems from the fact that Gaza Strip school buildings not only host more than 450,000 students and teachers, but also serve as emergency shelters for those who lose their homes as a result of political instabilities in the region. 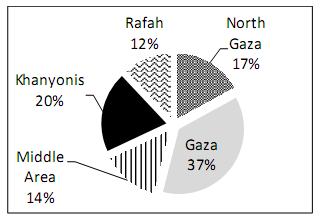 4. Proposed Approach for Rapid Seismic Survey of School Buildings
The new proposed approach for seismic evaluation of existing school buildings is based on the European Macroseismic Scale (EMS-98) and data collected from field survey of school buildings. Fifteen structural and architectural parameters that create vulnerability are included within the survey forms. The method is summarized in the following steps.

A. Preparing the field survey forms that take into account the structural and architectural parameters, which are listed below 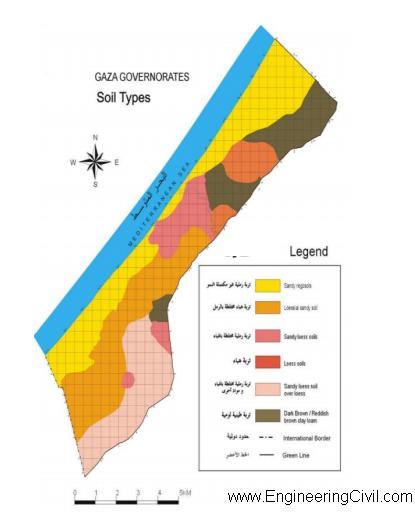 Figure(2) : Classification of soil texture profile in the Gaza Strip 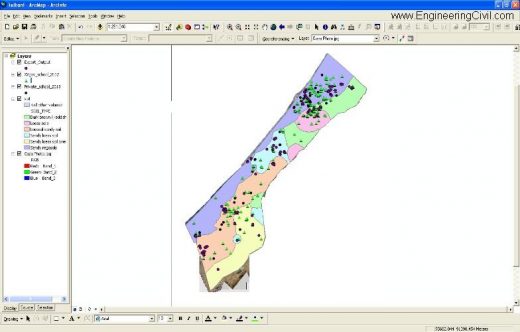 School buildings considered in the study
As discussed earlier, the selection is based on building structural system, building age and founding soil properties. Sixty four schools are chosen as shown in Figure (4). 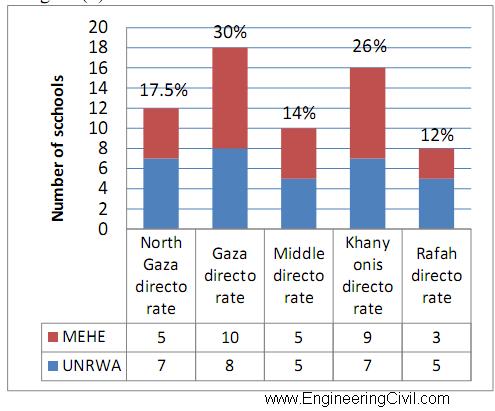 The information collected from the field survey sheets is to identify most parameters that affect identifying the attribution of the vulnerability class (Adequacy of entrance and distance of staircases, Short columns, Cantilever system…).The results show that the most observed element in surveyed schools are short columns (El.03), cantilever system (E.04) and soft story (E.08) , (See Fig 6). 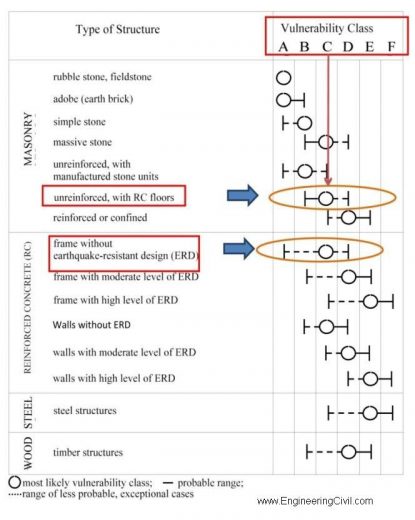 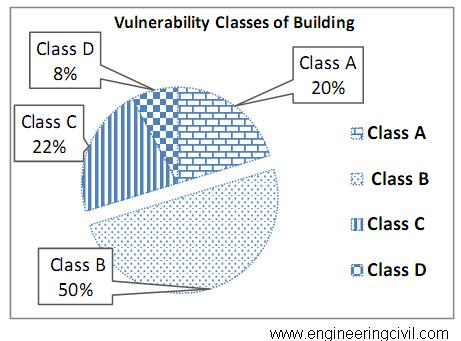 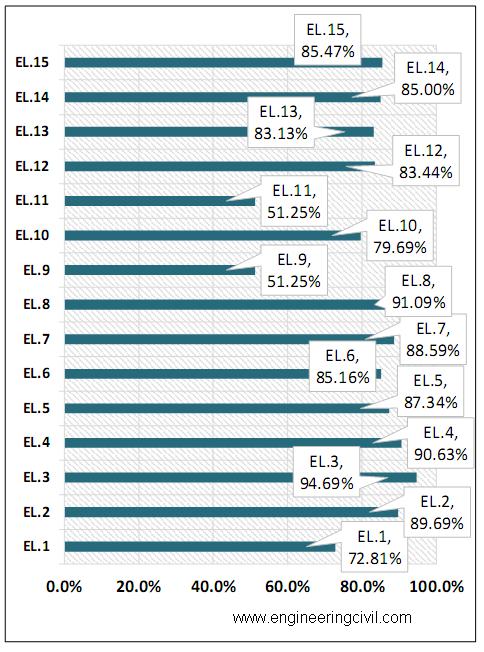 Estimate of Damage
The distribution of damage varies from directorate to another. For each vulnerability class, the percentages of damage grade for each of the different degrees of macroseismic intensity is described. According to many studies (Dabek, 2007), (Kahane, 1988)and (Yankelevsky, 2008), Palestine could be exposed to strong earthquake once or twice during each 50 years and the intensity would be on Modified Mercalli of “VII” and “VIII”).The distribution of damage degrees (D1 to D5) for various EMS-98 intensities (V, VI, VII and VIII) for the school buildings under study are shown in (Fig. 7, 8and 9). 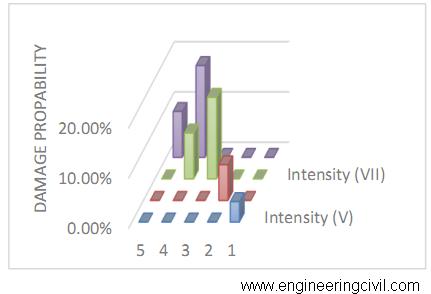 Figure 7 :Distribution of damage degrees for Vulnerability class (A) 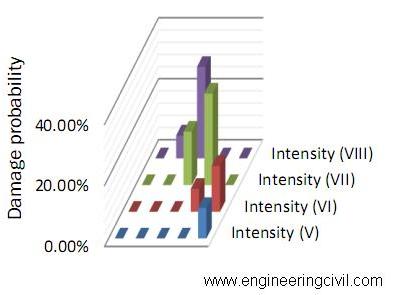 Figure 8: Distribution of damage degrees for Vulnerability class (B) 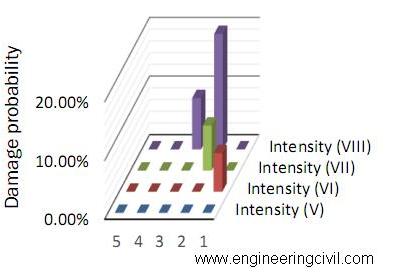 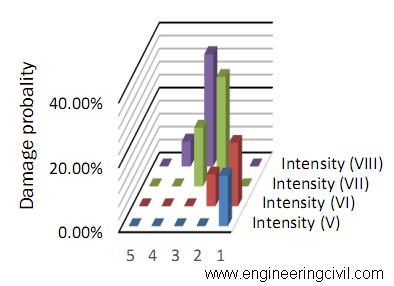 Conclusion:
The proposed approach for assessment existing school building is based on simple procedure for the evaluation of vulnerability classes and damage distribution using a Macroseismic method (EMS-98).

About Paper Authors
Samir Shihada is professor in structural engineering at the department of civil engineering in the Islamic University of Gaza. He has extensive experience in teaching and practicing structural concrete design where he has published a refereed book entitled “Reinforced Concrete Design”. His research interests include structural concrete design codes, seismic design. Furthermore, he has served on several government committees dealing with building damage evaluation and engineering education. 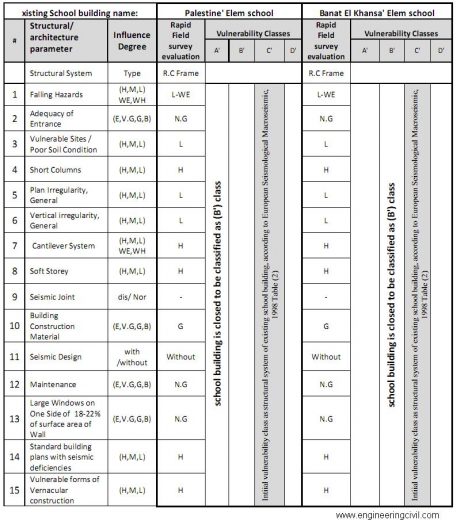 We at engineeringcivil.com are thankful to Er Sallam Shurrab for submitting the research paper on “Seismic Vulnerability Assessment of School Buildings” to us. We are hopeful that this would help others to understand and explore more on this topic.