Abstract
The objective of this study is to identify an efficient retrofitting method for existing open ground story reinforced concrete frame buildings. Failure of several soft-stored buildings in the past earthquakes underscores the need to retrofit existing soft-story buildings. A common cause for the collapse of multi-storied buildings is the occurrence of soft story in the ground floor due to the presence of infill walls in the upper story. During the Bhuj (Gujarat) earthquake of 6thJanuary 2001 several soft storied building failed there by confirming the vulnerability of such buildings to earthquake loading. This underscores the need to retrofit existing soft story buildings to prevent their total collapse. The existing building structures, which were designed and constructed according to early codal provisions, do not satisfy requirements of current seismic code and design practices. A two dimensional R.C. frame designed with linear elastic dynamic analysis using response spectrum method. The computer software package STAAD Pro–2005 is used for dynamics analysis technique is used to assess the performance of a (G + 4) reinforced concrete buildings, of which the ground storey is a parking facility the ground storey is 3.5m high while the upper stories giving a total height of 15.5 m. the building is located in Seismic Zone IV.

The RC frame is retrofitted by three methods namely,
1) Brick masonry infill in the ground story.

2) Steel braces in the ground story.

The study concludes that the building designed as per provisions of IS: 456:2000 using limit state method of design, and analyzed as per existing seismic code IS: 1893-2000 of all these three methods studied the use of structural wall in the ground story panel gave the maximum strength and ductility.

Reinforced Concrete (RC) is the popular material for building construction in India. Also construction in RC is considered to be labour intensive and supposedly requires lesser high tech tools, infrastructure and skills, than those in structural steel. Low and medium rise RC frame buildings with masonary infill are very common in urban India (fig 1). The 2001 Bhuj earthquake is the first significant One in the past five decades to have struck the urban constructions of India in big way, and to have provided revealing evaluation of the seismic resistance of engineered Buildings. Numerous RC frame buildings collapsed during the 2001 Bhuj earthquake proving that the surge of construction over the last decade has not adequately addressed their seismic safety. Most affected multi storey buildings are 5 storeys high (Ground+ 4 storeys), and many up to11 storeys (Ground +10); the basement storeys are additional. Typical storey height varies from 2.6m to 3.2 m. in most of the buildings; the ground storey is left open to accommodate the parking. Some of the buildings have partially filled ground storeys. In contrast to the infilled upper storeys, the open ground storey may cause; (a) soft storey effect: the open storey may have smaller stiffness and cause increased deformation demand in the frame members of the storey; and (b) Weak storey effect: the open ground storey may have lower lateral strength and cause a discontinuity in flow of lateral seismic shear in that storey.

Retrofitting of buildings is required to overcome the seismic deficiency:
Three levels of improvement of existing RC frame buildings are possible, namely (a) Repair: only cosmetic modifications are made, (b) Restore: structural modifications are made such that the original seismic performance of the building is restored, and (c) Strengthen: structural modifications are made such that a higher seismic performance of the building is achieved than that of the original undamaged structure.
The paper presents an overview of some of the retrofitting measures of RC frame buildings. A reduced scale of a (G+3) double bay storied brick infilled RC frame with open storey is analyzed till failure. Then three retrofitting methods re applied on the frame in the open ground storey, namely (a) open ground storey (b) infilling with brick masonary (specimen BMI), and (c) introduction to RC structural walls (specimen SW)(d) steel bracing (specimen SB). The results are compared to estimate the efficiency of these three methods.

RETROFIT SCHEMES
Strengthening schemes are implemented as part of either post earthquake Restoration of buildings or as pre-earthquake preparedness. The aims of strengthening measures are to provide increased ductility to structures. In Indian scenario, the relevant retrofitting schemes are (a) open ground storey (b) masonry infilling in RC frame, (c) RC structural wall, considering cost and feasibility of schemes. RC walls and steel bracings (e.g., Jordan, 1990; Pincheira and Jirsa, 1995; Ghogarah andYoussef, 2000).

For a particular building, the performance of a specific retrofitting scheme depends on the properties of the original building, and the characteristics of the expected ground motion at the site. Thus a quantative comparative study of the retrofitting schemes needs to be done for the judicious selection of the final scheme. The prescriptive methods of strengthening of buildings being recommended lately in urban India lack the quantative rigour. Two quantative approaches for seismic retrofitting have been elaborated [Murty, 2002], namely (a) simple approach which focuses on strength and stiffness aspects alone, and (b) state of the art approach which addresses ductility in addition to the other two. The following study of a two dimensional RC frame is based on the second approach.

ANALYTICAL STUDY
A (G+3) storeyed two bay RC frame with open ground storey and brick infilled top storey is considered with the storey heights as 3m and 3.5m for the top and the ground storeys respectively. The bay width is taken as 5m.The frame is assumed to be fixed against translation in all directions and rotation about all axes at the bottom nodes. The design lateral force on the infilled frame was estimated using the Indian Seismic Code [IS: 1893, 2002]. The frame was modeled in STAAD-PRO 2005 and linear Elastic analysis was carried out under the lateral force. The frame members were designed and detailed (figure 3) for the corresponding stress resultants as per Indian Concrete code [IS 456, 2000]. The details of beam and column are as shown in table1. The thickness of the brick infill is taken as 150mm to flush with the column size

Table No.1: Details of building.

Lateral pushover analyses of specimen OGS are performed using STAAD-PRO 2005.The infill was modeled as single strut element with possibility of forming axial hinge .the strut hinge properties were computed as per the existing model [Rein horn et al., 1995]. For the beams, the moment (M-?) hinge and the shear hinge (V-?,) were provided, and for the columns the moment hinge, shear hinge and axial force moment (P-M) interaction hinge were provided. The analysis stopped when a mechanism was formed in the frame.

The model OGS was strengthened by the following retrofitting schemes. Each of them was modeled in STAAD PRO 2005 and subjected to lateral pushover analysis for estimating their limiting characteristics. 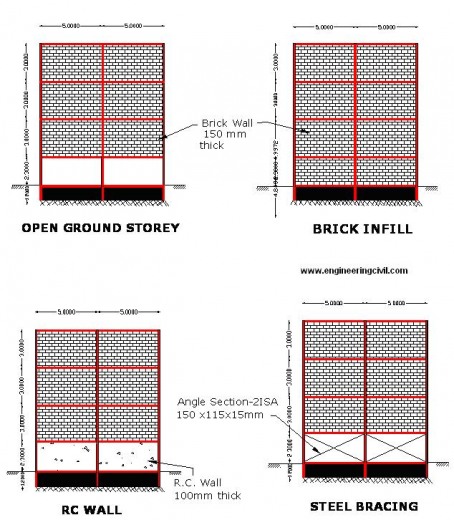 Figure No. 1: Elevational views of specimens for analysis.

2) STRUCTURAL WALL:
Basically, the structural wall was introduced in the open panel of the ground storey. A single layer of reinforcement was provided for the 100 mm thick RC structural wall designed as per the Indian standard for ductile detailing [IS13920, 1993].

RESULTS
The comparative pushover curves fig.2 (b) show that the model SW exhibits the maximum frequency of 53.09 Hz at a time period of 0.019 sec, for mode no.06.The model BMI with masonry infill shows brittle failure. The strength of model BMI peaks up at 49.315hz at 0.02 sec time period shown in figure 2 (b). Similarly for steel bracing the curve shown in fig. 2(a) with respect to open ground storey curve shown in fig. 2(d)

CONCLUSIONS:
The salient conclusions of the study are:

2) Although the initial stiffness of the brick masonry infilled specimen is more than that of the other specimen, at higher displacement levels, and the RC structural wall specimens gave better stiffness.

3) Introducing the RC structural wall in the open ground storey gives the most desirable behaviour for the two dimensional frame from the points of view of strength, stiffness ductility and frequency profile.

We are thankful to Shri.Pravin B.Waghmare for publishing A Comparative Study of Retrofitting Of R.C. Building Using Steel Bracing And Infill Walls. This will be of great use to all civil engineers who are looking to understand the concept of retrofitting.

One comment on "A Comparative Study of Retrofitting Of R.C. Building Using Steel Bracing And Infill Walls"

I am interested in Retroffiting work design.
Can you provide sample and procedure and materials used in
retrofitting columns and foundation?