AIM OF THE EXPERIMENT
This test is performed to determine the relationship between the moisture content and dry density of a soil for a specified compactive effort. 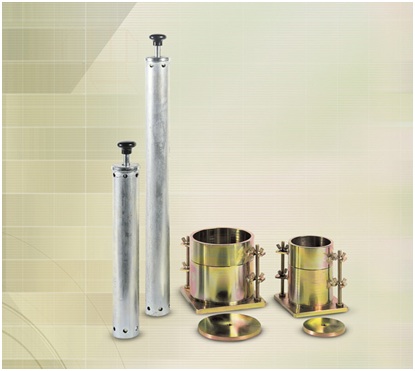 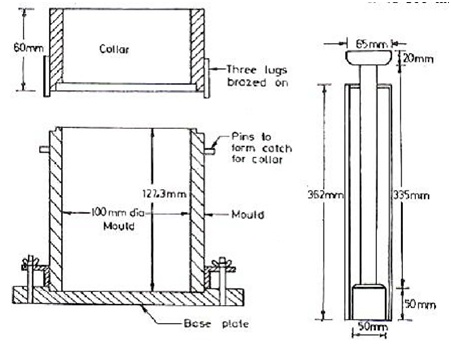 SOIL SPECIMEN
The soil specimen used must pass through 4.75 mm IS Sieve.

THEORY
Conduction od Proctor’s compaction test is based on the assessment of water content and dry density relationship of a soil for a specified compactive effort. The mechanical process of densification through reduction of air voids in the soil mass is called compaction. The amount of mechanical energy which is applied to the soil mass is the compactive effort. There are many methods to compact soil in the field, and some examples include tamping, kneading, vibration and static load compaction. This test will employ the tamping or impact compaction method using the type of equipment & methodology developed by R. R. Proctor in 1933, hence, the test is also known as the Proctor test.

The bulk density in g/ml of each compacted specimen shall be calculated from the equation:

The dry density in g/ml of each compacted specimen shall be calculated from the equation:

SIGNIFICANCE OF THE EXPERIMENT

PROCEDURE
1. The mould with base plate is cleaned and dried and weighed it to measure the nearest 1 gm.
2. Grease is applied on the mould along with base plate and collar completely.
3. About 16- 18 kg of air-dried pulverised soil is taken.
4. 4% of water is added to the soil if the soil is sandy and about 8% if the soil is clayey & mixed it thoroughly. The soil is kept in air tight container and allowed it to mature for about an hour.
5. About 3 kg of the processed soil is taken and divided into approximately three equal portions.
6. One portion of the soil is put into the mould and compacted it by applying 25 number of uniformly distributed blows.
7. The top surface of the compacted soil is scratched using spatula before filling the mould with second layer of soil. The soil is compacted in the similar fashion as done in for the first layer and scratched it.
8. The same procedure for third layer is also repeated.
9. The collar is removed & trimmed off the excess soil projecting above the mould using straight edge.
10. The mould is cleaned and also the base plate from outside & weighed in to the nearest gram.
11. The soil is removed from the top, middle and bottom of the case and the average of water content is determined.
12. About 3% water or a fresh portion of the processed soil is added and the steps from 5 to 12 are repeated.

DISCUSSION
The maximum dry density in g/cm3is to be reported to the nearest 0.01 and the optimum moisture content is to be reported to the nearest 0.5. The graph between γd v/s w (%) is plotted and the maximum dry unit weight of compaction, γd(max)is determined. The moisture content which is optimum is also determined corresponding to γd(max). The dry densities obtained in a series of determinations are plotted against the corresponding moisture content which gives smooth curve with convexity upward. At first the dry unit weight after compaction increases as the moisture content increases but after the optimum moisture content percentage is exceeded, any added water will result in a reduction in dry weight because the pore water pressure will be pushing the soil particles apart, decreasing the friction between them.

Thanks for providing sufficient information.

How to use odd and omc value obtained in field?