This is an in situ test for settlement computation in granular soils. It is difficult to procure the undisturbed samples of granular soils which are non-cohesive. Hence, the laboratory tests cannot be used to obtain the compressibility characteristics of granular soils. Plate Load Test is one of the most frequently used field tests where the test plate simulates a foundation. The method may also be used to evaluate the ultimate bearing capacity, the shear strength and deformation parameters of the soil at the ground surface, in trenches, or in pits.

The plate load test may be carried out in all soils, fills and rocks. The suitable soil for the test is coarse grained and composite soils as well as stiff to firm fine-grained soil. The test should normally not be used for very fine-grained soil. In the progress of the test, care should be taken to ensure that the loading plate is not placed directly on the particles than one-quarter of its diameter.

The plate load test is very useful as it gives results instantly on the field. It serves as a good test for quality control or checking for road compaction, piling mats, haul roads, etc. The test procedure is explained in IS: 1888-1982. 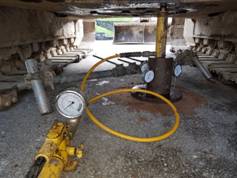 I. A rough mild steel plate: Rigid plates for performing the test come in different diameters ranging from 30 cm, 45 cm, 60 cm or 75 cm in size, square in shape is used. Since the stress influence zone is generally two times the plate diameter, so it is desirable to use large dimension plates. Generally smaller sizes are used in dense or stiff soils and larger sizes in loose or soft soils.

II. Forc measuring system: A mechanical or electrical force transducer is fitted between the loading plate and the hydraulic jack. It is used to measure the load on the plate. 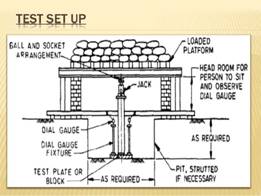 I. Firstly the test location is selected and depth of the point where the required foundation would be constructed. A pit of dimension not less than five times the width of the plate is excavated up to the proposed depth of foundation.

The test plate is seated at the center over a fine sand layer of a maximum thickness of 5 mm. If the water table is present above the level of the test pit, water is to be pumped out carefully.

II. A seating load of 70 g/cm2 is first applied and released after some time. Loads are applied on the test plate in increments of one-fifth of the estimated safe load up to failure or at least until a settlement of 25 mm has occurred, which is earlier.

III. The load-settlement curve can be plotted for the test plate from the test data.

In 1948, Terzaghi and Peck have recommended that settlement of a footing on cohesionless soil can be obtained by extrapolating from the settlement experienced by a test plate at the same load intensity. The supporting equation is

Some important considerations to be kept in mind during the test are:

The load-settlement cure obtained from a plate load test can be used to determine the ultimate bearing capacity and the safe bearing pressure of foundations. In the year 1980, Rao and Ramasamy recommended that the safe bearing pressure corresponding should be 50 percent of the ultimate bearing capacity of the test plate. If the test is carried out above the natural water table, the settlement curve will have to be corrected if there is any possibility of rising in the water table in the future. 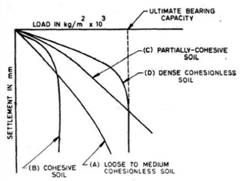