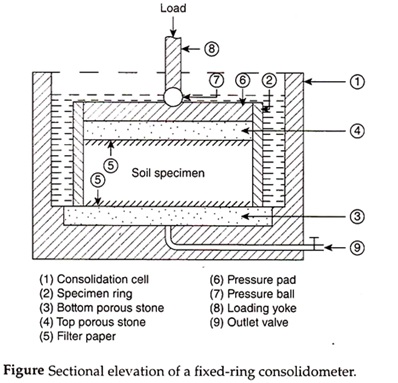 2. Fixed ring cell in which the bottom porous stone cannot move. Only the top porous stone can move downwards as the specimen consolidates. The fixed ring cell can also be used as a variable- head permeability test apparatus. For this purpose, a piezometer is attached to the base of the cell. The inside surface of the fixed ring should be smooth and polished, mainly to reduce friction when the sample is placed. During the test, the ring creates a condition of zero lateral strain on the soil sample placed in the cell. The internal diameter of the cell is usually 60 mm, but the cells with a diameter up to 100 mm are also available. The thickness of the sample is fixed from the following considerations:

Therefore, the thickness of the sample for a 60 mm diameter cell is taken as 20 mm. The specimen of diameter 50, 70, and 100 mm may also be used in special cases.

Before conducting the test, the porous stones are saturated either by boiling them in distilled water for about 15 minutes or by keeping them submerged under water for 4 to 8 hours. The bottom porous stone is first placed in the consolidation cell and a filter paper is fixed on the porous stone. The fixed ring containing the soil sample is then placed on the bottom porous stone. Then a filter paper is kept on the top of the sample and then the top porous stone is placed over it. The loading pad is placed on the top porous stone. The bolts are tightened so as to hold the entire assembly, and then the consolidation cell is kept under loading unit. It should be centered carefully so that the load is applied axially. The dial gauge is mounted and adjusted. The mould assembly is joined to the water reservoir to saturate the sample. For complete saturation, the level of water in the reservoir should be approximately same or equal as that of the sample assembly.

Then the second increment of the load is applied. It is usual practice to double the previous load in each increment. The successive pressured usually applied are 20.40,80,160,320 and 640 kN/m2 etc., till the desired maximum required load intensity is reached. The maximum load intensity is governed by the actual loading on the soil in the field after the construction of the structure.

Immediately after complete unloading the ring with the sample is taken out. The excess water in the soil surface can be dried using a blotting paper. The weight of the ring and the sample is taken. The sample is then dried in an oven (maintained at 110 degree Celsius) for 24 hours and its dry mass,Ms and the water content are determined.