1. The Commune, Beijing
First phase completed 2002, expansion scheduled for completion in 2010.
The complex includes houses by 12 of Asia ‘s leading architects. It was conceived by married real-estate developers Zhang Xin and Pan Shiyi, who gave each architect a $1 million budget. Shigeru Ban, the Japanese architect most famous for the paper houses he designed for refugees of the Kobe earthquake, designed the Furniture House, featuring the laminated plywood typically used for modular furniture, and China’s Yung Ho Chang created the Split House, which takes the idea of a boxy dwelling, slices it in half, and spreads it out like a fan.

The Commune is now operated as a boutique hotel by the Germany luxury hotel group Kempinski, which is responsible for an upcoming expansion, which will feature 21 homes (including replications of the originals). One element will remain untouched in the new development: the Commune’s private pedestrian trails, which trace untouched sections of the Great Wall.
Photo: Ma Xiaochun 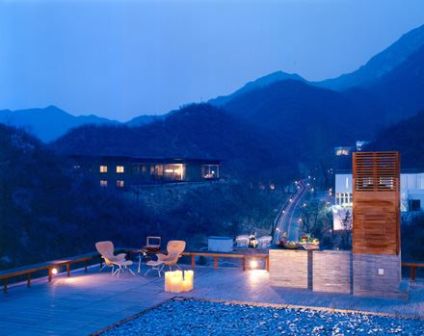 2. Beijing International Airport , Beijing
According to the U.S. Embassy to China, the country will be building 108 new airports between 2004 and 2009 — including what will be the world’s largest: the Beijing International Airport, designed by Foster & Partners. Set to open at the end of 2007, in time for the Beijing Olympics in 2008, the airport terminal will cover more than 1 million square meters, giving it a bigger footprint than the Pentagon.

It’s designed to handle 43 million passengers a year initially and 55 million by 2015, figures that will probably push the new facility into the ranks of the top 10 busiest airports, going by the 2004 numbers from the Airports Council International. Given the scale and traffic, Foster & Partners focused on the traveler’s experience, making sure that walking distances are short, for instance. 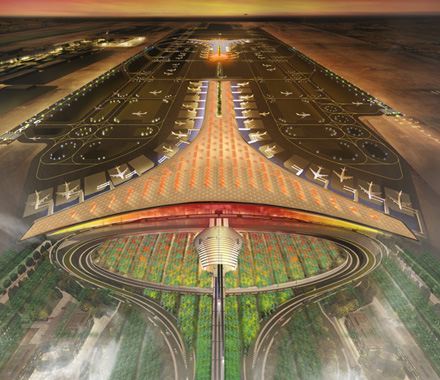 One of the biggest challenges of building tall is creating a structure that can withstand high winds. The architects devised an innovation solution to alleviate wind pressure by adding a rectangular cut-out at the building’s apex. Not only does the open area help reduce the building’s sway but it also will be home to the world’s highest outdoor observation deck — a 100th-floor vista that will take vertigo to new heights. 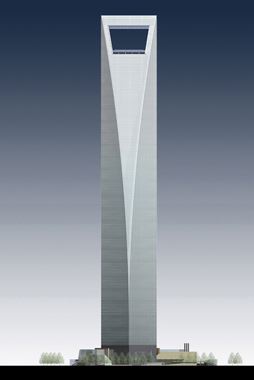 4. National Swimming Center , Beijing
The striking exterior of the National Swimming Center , being constructed for the 2008 Olympic Games and nicknamed, the “Water Cube,” is made from panels of a lightweight form of Teflon that transforms the building into an energy-efficient greenhouse-like environment. Solar energy will also be used to heat the swimming pools, which are designed to reuse double-filtered, backwashed pool water that’s usually dumped as waste.

Excess rainwater will also be collected and stored in subterranean tanks and used to fill the pools. The complex engineering system of curvy steel frames that form the structure of the bubble-like skin are based on research into the structural properties of soap bubbles by two physicists at Dublin ‘s Trinity College . The unique structure is designed to help the building withstand nearly any seismic disruptions. 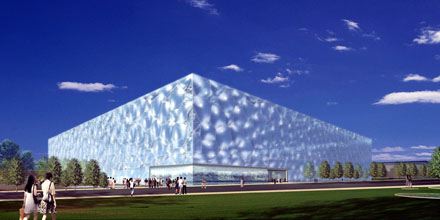 5) Central Chinese Television CCTV, Beijing
The design of the new Central Chinese Television (CCTV) headquarters defies the popular conception of a skyscraper — and it broke Beijing’s building codes and required approval by a special review panel. The standard systems for engineering gravity and lateral loads in buildings didn’t apply to the CCTV building, which is formed by two leaning towers, each bent 90 degrees at the top and bottom to form a continuous loop.

The engineer’s solution is to create a structural “tube” of diagonal supports. The irregular pattern of this “diagrid” system reflects the distribution of forces across the tube’s surface. Designed by Rem Koolhaas and Ole Scheeren and engineered by Ove Arup, the new CCTV tower rethinks what a skyscraper can be. 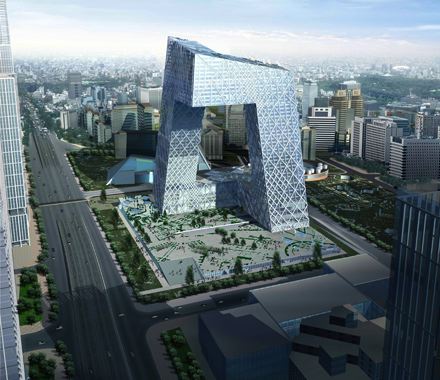 This is submitted by Er. Akhansha

what a amazing man thinging