SSAWS, pronounced “zaws” and officially known as LaLaport Skidome SSAWS, was an indoor ski slope in Funabashi, Chiba, Japan. SSAWS is acronym of “Spring Summer Autumn Winter Snow”.It was constructed by Mitsui at the cost of US$400 million. It opened on July 15, 1993. The structural height of 100 meters, width of 100m and a length of 500m it was the largest indoor ski slope in the world at the time. The complex had three ski courses —20.1° for skilled skiers, 15° for intermediate, and 10° for beginners — and two ski lifts.

The ski slope was designed to break even by 2018 by attracting 1,300,000 visitors yearly, who would pay ¥4,300 yen (~US$50) for 2 hours of lift time and spend a total of $70 on average. However, the opening of the ski slope came shortly after the popping of the Japanese asset price bubble and original estimates soon proved too optimistic, with the number of visitors dropping from one million in the first year to 700,000 in the second.

With an annual operating cost of US$40 million, SSAWS sustained losses averaging US$16.7 million/year.SSAWS closed on September 30, 2002. In 2003, the structure was demolished to make way for Japan’s first large-format IKEA store, which opened on the site on April 24, 2006. 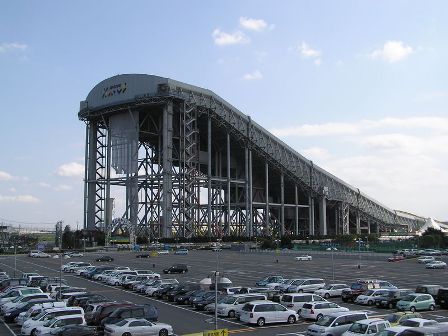 This article was submitted by Akansha.