Millau Viaduct France (In French le Viaduc de Millau) is one of the most awesome civil engineering project. It is a large cable-stayed road-bridge that spans the valley of the River Tarn near Millau in France. It was designed by structural engineer Michel Virlogeux and architect Norman Foster.One of the summit of this bridge is at a height of 343 meters)1125 ft) which makes it is the tallest vehicular bridge in the world.

The Millau Viaduct consists of an eight-span steel roadway supported by seven concrete pylons. The roadway weighs 36,000 tons and is 2,460 m (8,100 ft) long, measuring 32 m (100 ft) wide by 4.2 m (14 ft) deep, making it the world’s longest cable-stayed deck. The six central spans each measure 342 m (1,120 ft) with the two outer spans measuring 204 m (670 ft). The roadway has a slope of 3% descending from south to north, and curves in a plane section with a 20 km (12 mi) radius to give drivers better visibility. It carries two lanes of traffic and one safety lane in each direction. 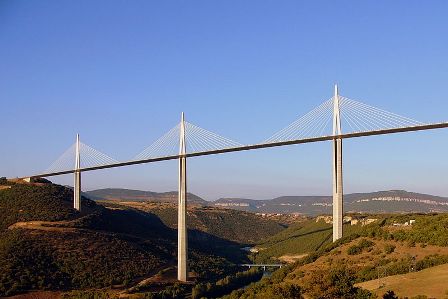 The pylons were assembled first, together with some intermediate temporary pylons, before the decks were slid out across the piers by satellite-guided hydraulic rams that moved the deck 600 mm every 4 minutes. Then the masts were driven over the new deck, erected on top of the pylons, connected to the deck and the temporary pylons removed.

Construction began on 10 October 2001 and was intended to take three years, but weather conditions put work on the bridge behind schedule. A revised schedule aimed for the bridge to be opened in January 2005. The viaduct was inaugurated by President Chirac on 14 December 2004 to open for traffic on 16 December, several weeks ahead of the revised schedule.

Masts
The seven masts, each 87 m (290 ft) high and weighing around 700 metric tons (770 short tons), are set on top of the pylons. Between each of them, eleven stays (metal cables) are anchored, providing support for the road deck.

Stays
Each mast of the viaduct is equipped with a monoaxial layer of eleven pairs of stays laid face to face. Depending on their length, the stays were made of 55 to 91 high tensile steel cables, or strands, themselves formed of seven strands of steel (a central strand with six intertwined strands). Each strand has triple protection against corrosion (galvanisation, a coating of petroleum wax and an extruded polyethylene sheath). The exterior envelope of the stays is itself coated along its entire length with a double helical weatherstrip. The idea is to avoid running water which, in high winds, could cause vibration in the stays and compromise the stability of the viaduct.The stays were installed by the Freyssinet company.

Surface To allow for deformations of the metal deck under traffic, a special surface of modified bitumen was installed by research teams from Appia. The surface is somewhat flexible to adapt to deformations in the steel deck without cracking, but it must nevertheless have sufficient strength to withstand motorway conditions (fatigue, density, texture, adherence, anti-rutting, etc.). The “ideal formula” was found only after ten years of research.

This article was taken from wikipedia and was submitted to us by Er. Akansha.

This is a great project.I am excited to see it

There is an associated museum which should be worth a visit. Next time I drive over the viaduct, I hope to have the time to find out how to get to it…

I’m fascinated by the bridge. But, I still do not understand how the curve of the bridge could give BETTER visibility to the drivers.Anyone?

Logically speaking, the driver entering at one end could see the span of the bridge as it is curved. If it were for a straight line (and leveled to the ground) he would only see through the pylons all the way to the other exit.

i am doing a project on this is it SUCKS!!!!!! i need to know how the engineers biult the tower sections of the bridge!!!

have a look at the discovery channel documentary, on youtube that was done on the construction and build of the bridge, it shows how the towers were made by laying concrete in layers using a mould like setup. Slow and painfull, but effective

This bridge is so GOOD

Sometimes things are not working as forecasted, thats life….