Safety / Stability of RCC structure during earthquake – A challenge to overcome

Safety / Stability of RCC structure during earthquake – A challenge to overcome

India has been plagued by some catastrophic earthquake tremors in past that have caused loss of property and human beings:

However, during the earthquake in New Zealand on 3rd September 2010 (magnitude on Richter’s scale: 7.0), only 2 people were injuredwhich was caused by falling masonry and glass. Interestingly, the said earthquake had struck when most people were asleep. Therefore it is clear that “EARTHQUAKES DON’T KILL PEOPLE, BUILDINGS DO!”

According to BIS 1893-1966 (Criteria for Earthquake Resistant Design of Structures), India was divided into 7 seismic zones, zone-0 to zone-VI. Later,In BIS 1893-1970, it was revised to zone-I to zone-V. Now, as per the latest version of BIS 1893-2002, zone-I has been merged with zone-II, and only seismic zones II to V exist (refer Figure 1) in India, where zone-II is the least earthquake prone zone, and zone-V is the highest. 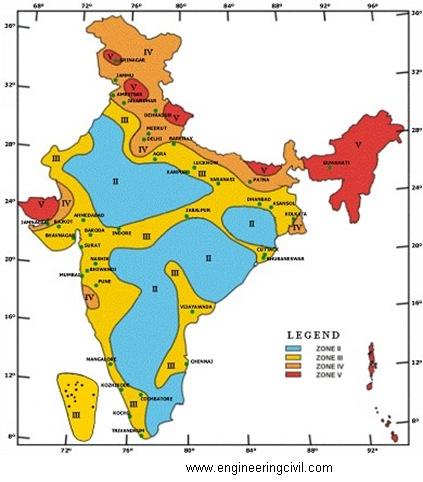 2. Proper detailing of structural elements as per BIS13920:1993, reaffirmed 2003 (Ductile detailing of RC Structures Subject to Seismic Forces), which is applicable for seismic zones III, IV and V.

SALIENT POINTS OF BIS1893 AND BIS13920 THAT SHOULD BE CONSIDERED DURING DESIGN ENGINEERING/DETAILING/CONSTRUCTION OF NEW RCC BUILDINGS/STRUCTURES LOCATED IN SEISMIC ZONES III, IV & V:
• During design using BIS1893, the structure should be designed as OMRF (Ordinary Moment Resisting Frame), if it is designed and detailed as per BIS456:2000, but not meeting ductile detailing requirement of BIS13920. However, if specially detailed to provide ductile behavior and comply to requirements of BIS13920, the structure should be designed as SMRF (Special Moment Resisting Frame), where R (response reduction factor, defined in BIS1893) is higher than that for OMRF, thus considering considerably less seismic base shear and making the structure more ductile and resistant to earthquake.

• Minimum grade of concrete to be used should be M20.

• High yield strength deformed steel bars, produced by the thermo-mechanical treatment process of grades Fe 500 and Fe 550 having elongation more than 14.5% and conforming to other requirements of BIS1786:2008 may be used for the reinforcement.

• Any reinforcement bar having higher elongation percent and UTS: YS ratio possesses better ductility. Thus satisfying Table 3 of BIS1786:2008, Fe500D and Fe550D use is advisable, where minimum elongation percent requirement is greater than 14.5%. Tata Tiscon has Fe500D rebar grade in market. The properties requirement of Fe500D as per BIS1786, and the properties available in Tata Tiscon Fe500D are given as follows:

• Apart from Fe500D grade, Tata Tiscon has “SD” (Super Ductile) grade of rebar, where “SD” is confirming to Fe500D requirements of BIS1786-2008, only having higher UTS/YS ratio, and hence better for highly seismic prone areas in India. However, “SD” grade of rebar is available at selected locations in India, which are highly seismic prone and generally falls in seismic zones IV and V. The features and properties requirement of “SD” versus “500D” grade is shown below. [refer Figures2 & 3] 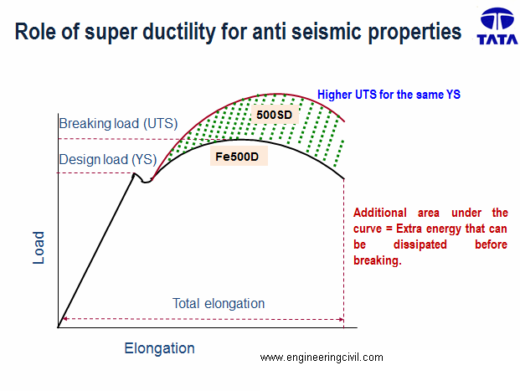 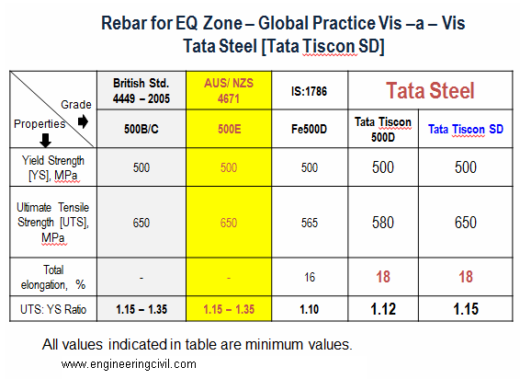 • At location of rebar splice (lap), centre-to-centre spacing of stirrups should not exceed 150 mm. [refer Figure5]

• Minimum and maximum percentage of longitudinal reinforcement in beam should satisfy requirements of BIS13920. As shown in Figure 6, the spacing of stirrups should be satisfied. However, nowhere spacing of hoops should be less than 100 mm. Minimum dia of hoop bar should be 6 mm. In beams with clear span exceeding 5m, the minimum bar dia should be 8mm. 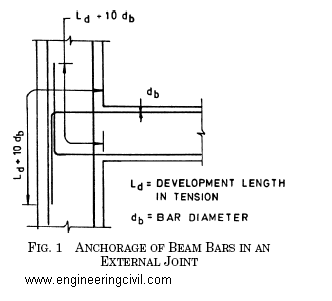 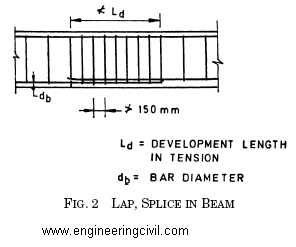 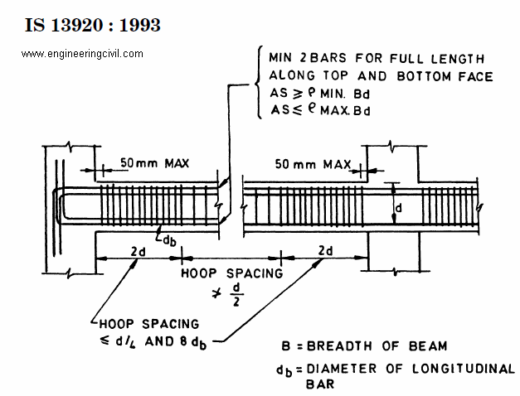 Figure7a: Correct practice as per BIS13920

• Special confining reinforcement should be provided in form of stirrups in all beam-column joints and column-footing joints, as per the provisions and clauses given in BIS13920. [refer Figure8]

• The spacing of hoops used as special confining reinforcement shall not exceed 1/4 of minimum member dimension but need not be less than 75 mm nor more than 100 mm.

• Shear walls are integral part of lateral load resisting system of the structure, and to show ductile behaviour, should be designed and detailed as per provisions and clauses given in BIS1893 and BIS13920. 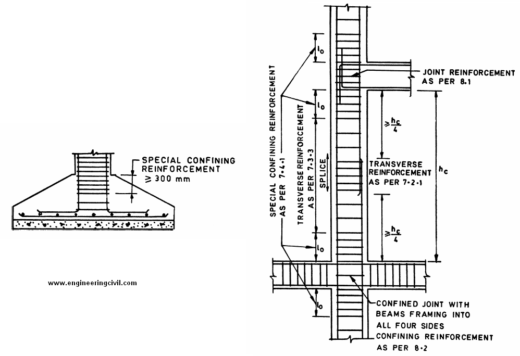 Disclaimer: This document aims only at highlighting good construction practises and meaningful applications to make RCC structures with proper safety/stability considerations. In any case the desired result is not obtained on following the write-up, the author shall not be responsible.

We at engineeringcivil.com are thankful to Sir Sourav Dutta for submitting this very useful information to us. We hope this will be of great use to all the civil engineers who are looking for information on Stability of RCC structure during earthquake
Share this post

STAAD Pro vs ETABS – Which is Better?