In a curved prestressed bridge, how should the guided bearings in piers of the curved region be oriented with respect to the fixed bearing in abutment?

In a curved prestressed bridge, how should the guided bearings in piers of the curved region be oriented with respect to the fixed bearing in abutment?

To determine the orientation of guided bearings, one should understand the movement of curved region of a prestressed bridge. Movement of prestress and creep are tangential to the curvature of the bridge (or along longitudinal axis) while the movement due to temperature and shrinkage effects are in a direction towards the fixed pier. If the direction of guided bearings is aligned towards the fixed bearing in the abutment, the difference in direction of pretress and creep movement and the guided direction towards fixed bearing would generate a locked-in force in the bridge system. The magnitude of the lock-in force is dependent on the stiffness of deck and supports. If the force is small, it can be designed as additional force acting on the support and deck. However, if the force is large, temporary freedom of movement at the guided bearings has to be provided during construction. 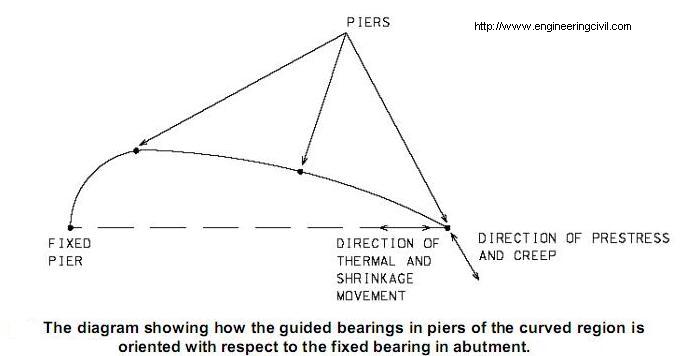