Formwork and its supports should maintain their correct position and be to correct shape and profile so that the final concrete structure is within the limits of the dimensional tolerances specified. They should be designed to withstand the worst combination of self-weight, reinforcement weight, wet concrete weight, concrete pressure, and construction and wind loads, together with all incidental dynamic effects caused by placing, vibrating and compacting the concrete.

Before permanent formwork is used in the structure, its durability and compatibility with adjoining concrete should be established. It should be properly anchored to the concrete.

Cleaning and Treatment of Formwork:
All rubbish, particularly, chippings, shavings and sawdust shall be removed from the interior of the forms before the concrete is placed. The face of formwork in contact with the concrete shall be cleaned and treated with form release agent. Release agents should be applied so as to provide a thin uniform coating to the forms without coating the reinforcement.

Stripping Time as per BIS456-2000 / SP-24:
In some cases, such as while using cements other than ordinary Portland cement or when the curing conditions are not normal, it may be necessary to estimate the strength of concrete at the time of removal of formwork.

Forms shall not be released until the concrete has achieved a strength of at least twice the stress to which the concrete may be subjected at the time of removal of formwork. The strength referred to shall be that of concrete using the same cement and aggregates and admixture, if any, with the same proportions and cured under conditions of temperature and moisture similar to those existing on the work.

While the above criteria of strength shall be the guiding factor for removal of formwork, in normal circumstances where ambient temperature does not fall below 15°C and where ordinary Portland cement is used and adequate curing is done, following striking period may deem to satisfy the following guideline of BIS456-2000 as given below in Fig 1: 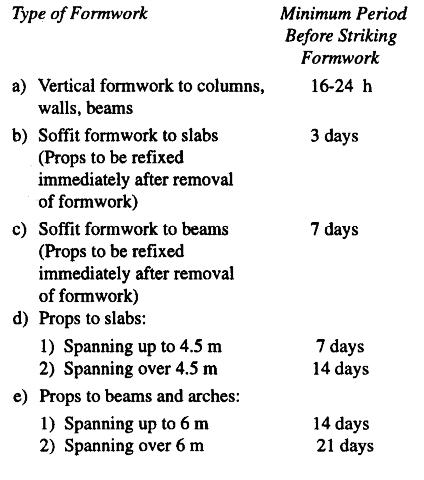 For other cements and lower temperature, the stripping time recommended above may be suitably modified. For rapid hardening cement, 3/7 of the periods given for ordinary Portland cement will be normally sufficient, except that a minimum period of 24 hours is required.

The number of props left under, their sizes and disposition shall be such as to be able to safely carry the full dead load of the slab, beam or arch as the case may be together with any live load likely to occur during curing or further construction.

Now to estimate the strength of concrete achieved at any age t (in days), an empirical formula of SP-24 may be used as given below in Fig 2: 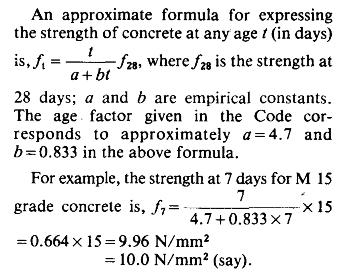 Thus during deshuttering following the norms as advised in Fig 1, the requirement of strength achieved by concrete can be estimated using the formula as given in Fig 2. 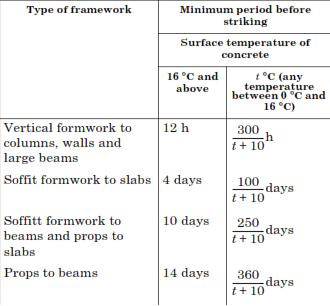 We at engineeringcivil.com are thankful to Er. Sourav Dutta for submitting this paper to us. We hope this paper will be helpful for the whole construction industry in general.

Ways to incorporate sustainability into the house

Uses of Plastic While Building A Home