ABSTRACT :
Skybus is the latsest, economical, eco-friendly, reliable and most innovative but simple mode of transportation developed by Konkan Railway as a rail based futurristic urban mass transit system.Sky bus failed in Metro city but it will be a grate success in Mountainous Region in lifting passenger and cargo to remote regions of Himalaya.

I . INTRODUCTION
In June 2013, a multi-day cloudburst centered on the North Indian state of Uttarakhand caused devastating floods and landslides in the country’s worst natural disaster since the 2004 tsunami. Though parts of Himachal Pradesh, Haryana, Delhi and Uttar Pradesh in India, some regions of Western Nepal, and some parts of Western Tibet also experienced heavy rainfall, over 95% of the casualties occurred in Uttarakhand. As of 16 July 2013, according to figures provided by the Uttarakhand government, more than 5,700 people were “presumed dead.” This total included 934 local residents. Destruction of bridges and roads left about 100,000 pilgrims and tourists trapped in the valleys leading to three of the four Hindu Chota Char Dham pilgrimage sites The Indian Air Force, the Indian Army, and paramilitary troops evacuated more than 110,000 people from the flood ravaged area. If we have built Sky Bus in this Region the Scale of damage to life may have been reduced. Rapid transport system like Sky Bus can be build between the valleys and reduce the distance by half the time by the Road. Alignment of Sky Bus Route should be selected in such way the Maximum city in the mountain region is covered. Sky bus is failed in Metro city but it will be Success in Mountainous Region. This can used as Disaster Management in rescue effort in evacuating people from the Region even road and Bridges are damaged in disaster prone area.

II. ABOUT THE TECHNOLOGY.
The Sky Bus technology offered by Konkan Railway Corporation meets the above requirements, and re-defines the thinking and planning for urban transport being an Eco-friendly Mass urban transport system revolutionizing urban life. It is a patented technology developed for the new millennium and will cause a paradigm shift in urban transportation all over the world. Being an indigenous technology, it will place India on the forefront of the Rapid Transit Industry all over the world while providing the much needed alternative transportation solution, which is financially viable, environment friendly, synergizing well proven existing cutting edge technologies.

Sky Bus is based on the concept of Sky Wheels presented in 1989 at the World Congress for Railway Research by Mr. B Rajaram, Managing Director of KRCL at Bologna University, Italy. The sky bus uses pre – fabricated latest construction technologies, which save time and money resulting in easy execution of the project in busy urban areas without disturbing the existing traffic pattern. All these structural engineering methods are well – proven. They have IT tools for economical communication and control. The 3 phase asynchronous AC electrical motor used for the propulsion of sky buses is also well proven and widely used abroad as well as in India.

The fixed structure at 8 metres height above road level provides the support and guidance for powered bogies which can run at 100 kmph, with the coach shells suspended below, carry passengers in air conditioned comfort, can follow existing road routes, while existing traffic on roads continue. It is aesthetically pleasing and there is no concern of a claustrophobic feeling for road users . Aesthetic, and eco-friendly, the Sky Bus is protected against derailment, toppling or collision – by design as well as by construction, hence is safer than the existing rail based system. At the cost of Rs. 50 Crore per km. in India , the system is noise – free and pollution – free with a capacity to transport 36000 passengers per hour (pph), scalable to 72,000 pph as required. With no signaling and having no points and crossings, it is a unique mass-transit system that can be put up within two years in any crowded & congested city. In addition to moving people, the Sky Bus system can carry standard 20 ft. containers, boosting its capacity utilization to double that of other existing systems. Since it operates along existing roadways and within municipal limits, Sky Bus metro falls under tramway category, under Art 366(20) of the Constitution of India.

• ii. In the middle of the roadway, pile foundations support 1 m. diameter columns approximately 8 m. high, and at a spacing of 15 m. all along the roadway. 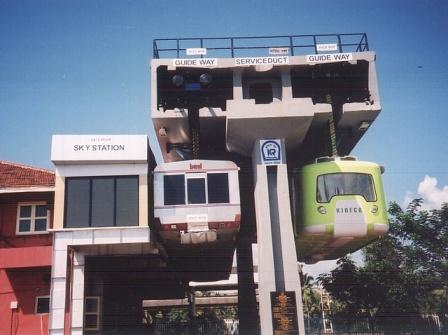 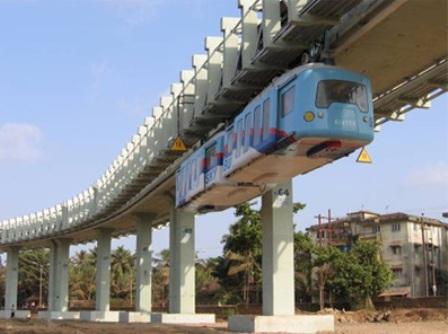 i) Fast Transportation in mountainous region
ii) No requirement of Land.
iii) Air & Noise Pollution free.
iv) Easy accessibility.
v) No scope of capsizing of the coaches in case of derailment.
vi) Deep Penetration as it can reach .of Himalaya regions and Zigzag roads as there is no interference with normal road traffic.
vii) Low Operational Cost due to the absence of track circuits or signals, points or Crossings.
viii) All urban transportation needs covering people and goods.

IV. ENVIRONMENTAL ISSUE
Unprecedented destruction by the rainfall witnessed in Uttarakhand state was attributed, by environmentalists, to unscientific developmental activities undertaken in recent decades contributing to high level of loss of property and lives. Roads constructed in haphazard style, new resorts and hotels built on fragile river banks and more than 70 hydroelectric projects in the watersheds of the state led to a “disaster waiting to happen” as termed by certain environmentalists. The environmental experts reported that the tunnels built and blasts undertaken for the 70 hydro electric projects contributed to the ecological imbalance in the state, with flows of river water restricted and the streamside development activity contributing to a higher number of landslides and more flooding.

V. CONCLUSION
After the disaster struck at Uttarakand, the region was totally isolated from rest of India .The Road, Air transportation was blocked, Bridge collapsed in all major routes, and the rescue operation was hampered. If we had Good Road Transportation system in Mountainous region .we would saved many precious life. We should Introduce Sky Bus transportation for passenger and cargo in Himalaya Region. The Region is surrounded by Mountain instead of zigzag road, movement will be as far straight as possible and distance between cities less and travel time is less and for effective movement of Passenger and cargo. We should consider Environment problem due to construction of Project Sky Bus in this Region and evaluate the Environment Impact assement for the project.

We at engineeringcivil.com are thankful to BalamuraliArumugam for submitting this to us and we hope this will be of great use to all who are looking to study more about the Feasibility of Sky Bus Metro in Himalayan Region.

What should be the details of building Sky Bus Metro?
How the flood can’t affect it and also its not economically feasible for our country.

i wanna ask one thing,i think we need to build different stations for getting in and out for people.
tell me some other way if u know about the stations???