Abstract
This research involves a failure analysis of the internal structural collapse that occurred in World Trade Center 5 due to fire exposure alone on September 11, 2001. It is hypothesized that the steel column-tree assembly failed during the heating phase of the fire. Abaqus/Standard was used to predict the structural performance of the assembly when exposed to the fire. Results from a finite element, thermal-stress model confirms this hypothesis, for it is concluded that the catastrophic, progressive structural collapse occurred approximately 2 hours into the fire exposure.

1. Background
World Trade Center 5 (WTC 5) was a nine-story building in the World Trade Center complex in New York City, NY (Figure 1). On September 11, 2001, flaming debris from the World Trade Center Tower collapses ignited fires in WTC 5. These fires burned unchecked, ultimately causing a localized interior collapse from the 8th floor to the 4th floor in the eastern section of the building (Figure 2). Debris impact was not a direct factor in this failure; the collapse was caused by fire alone.

The structural design of WTC 5 employed a common framing configuration, with steel column-tree assemblies that had beam stubs welded to the columns and cantilevering to support simple-span girders. The connections between the girders and the beam stubs were shear plates attached to the webs with bolts. The floor framing was topped with a concrete slab with welded wire fabric reinforcement.

Forensic evidence suggests that the collapse occurred during the heating phase of the fire. The columns remained straight and freestanding after the collapse (Figure 2), suggesting that the girders never developed catenary action that would have pulled columns inward, particularly as the girders cooled late in the fire. In general, the timing of this failure (early in the fire when occupants and firefighters could be in the building and therefore at great risk) is not typical for steel structures. 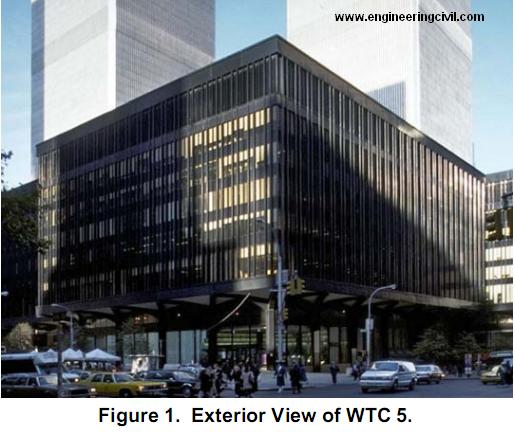 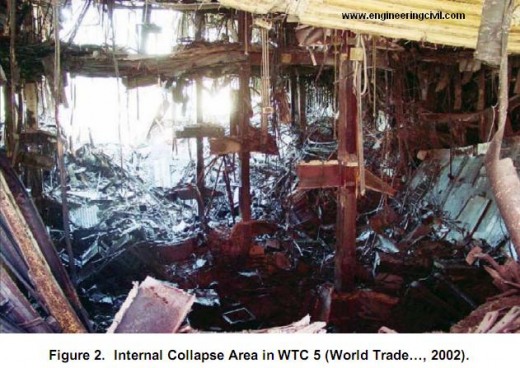 2. Finite Element Analysis Approach
For this research, the nonlinear heat transfer and stress analysis capabilities of Abaqus/Standard allowed study of the mechanisms that caused WTC 5 to suffer an internal collapse. The structural plans and details of WTC 5 provided the data for an accurate model of the structural configuration.

The process involved sequentially coupled thermal-stress analyses with a heat transfer simulation to determine temperature history, followed by a stress analysis that incorporated the temperature history as part of the loading. The analyses modeled four structural bays on the 8th floor of WTC 5 (a typical bay is shown in Figure 3) using the mesh detail shown in Figure 4 for both models. 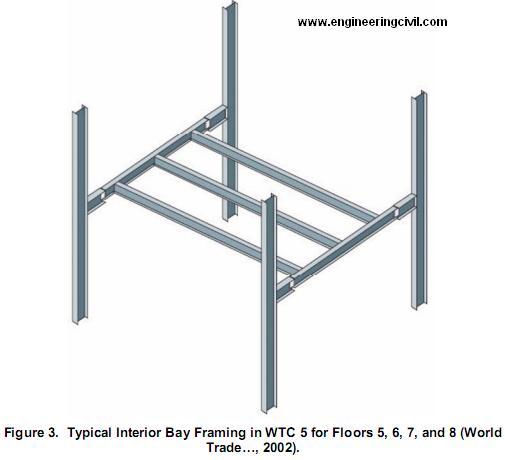 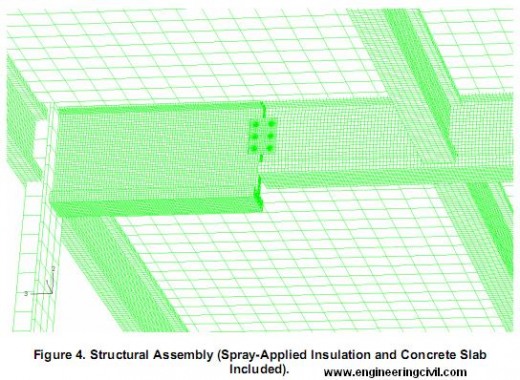 2.1 Heat Transfer Analysis
The model included common spray-applied mineral fiber fireproofing insulation as shown in Figure 4, in which the thermal contact between the insulation and steel, as well as the temperature-dependent properties of A36 steel, were derived from literature.

The 2005 National Institute of Standards and Technology (NIST) report on the performance of the World Trade Center Towers (WTC 1 and WTC 2) provided the basis for the effective heat of combustion and the peak heat release rate of the fire that occurred within WTC 5. The time function of the heat release rate became the input for a Consolidated Fire and Smoke Transport Model (CFAST, developed by NIST) analysis to estimate the upper gas layer temperature history of the fire.

A convective film condition on the faces of the assembly exposed to the fire environment modeled the thermal loading, using a heat transfer coefficient characteristic of turbulent, natural convective heating. Subsequently, the results of the CFAST simulation prescribed the sink temperature history of the model.

2.2 Stress Analysis
The three-dimensional temperature distribution history of the steel assembly based on the heat transfer analysis became part of the loading in the stress analysis. Other loads applied to the model included gravity to model the weight and 39 kips of pretension in each bolt to produce an idealization of the static and kinetic friction conditions at the connection.

The model utilized nonlinear, temperature-dependent stiffness and thermal expansion properties of A36 steel based on experimental data (Harmathy, 1993). Therefore, the temperature distribution history dictated the steel strength and stiffness properties. The nonlinear material properties, together with modeling to account for geometric nonlinearities, produced high-fidelity analyses of structural performance during the fire.

2.3 Failure Criterion Analysis
Forensic evidence suggests that the shear connection failures in WTC 5 were due to rupture of the web portion of the beam stems. This type of failure occurs when the bolts bear against the weak side (i.e., acting toward the free end of the member) of the bolt holes. Bearing stress of this type causes shear planes to form in the web steel. Finally, cracks along the shear planes cause catastrophic failure of the shear connection.

A simple model consisting of a single bolt and holes in connected plates provided data on the material strain condition at the point of catastrophic rupture. A failure load, derived using the AISC Steel Manual of Steel Construction (2001), applied to the single bolt model produced the required strain data. The plastic shear strain for the failure load produced the failure criterion for the full connection models.

3. Simulation Results
The temperature distribution near a shear connection after two hours of fire exposure is shown in Figure 5. In general, the average temperature of the steel agrees well with estimates from hand calculations. The results of the thermal model show that the insulation delayed the transmission of heat to the steel during the fire exposure as anticipated. Moreover, the results show that the upper region of the steel assembly remained cooler due to the heat sink effect of the overhead concrete slab.

The temperature of the beam stems at the shear connection was approximately 400 °C hotter than at the column after two hours of fire exposure. The beam stem was exposed uniformly to the hot gases and began to heat in accordance with its heat transfer properties. The cooler column (and adjacent structure) acted as a heat sink that tended to moderate the temperature rise of the beam stem immediately adjacent to the column. The shear connection was located far enough from this critical heat sink that it remained relatively unaffected, and quickly rose in temperature along with the simple-span girder.

As the steel in the compartment heated in the first hour of fire exposure, it expanded, causing the floor girder to elongate significantly and close the gap between it and the beam stem. This elongation caused relatively harmless compressive stress concentrations as the bolts pushed into the beam stem web.

As the temperature of the steel assembly increased further, the frame rigidity decreased steadily,causing the floor girders to deflect significantly. This deflection caused the lower flange of the girder to contact and deform the beam stem web, forming a fulcrum at the contact point. After about two hours of fire exposure, the loss of rigidity in the steel “outpaced” its thermal expansion, and the top bolt of the shear connection, which was pushing into the web, started to pull toward the end of the beam stem web (Figure 6). 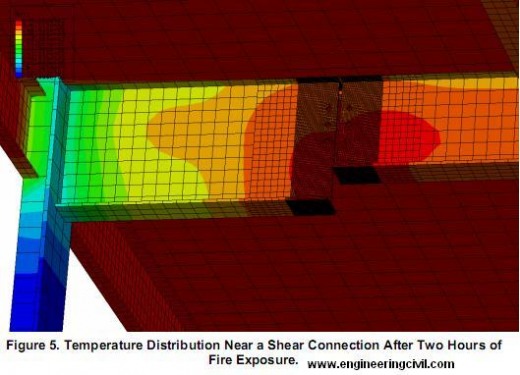 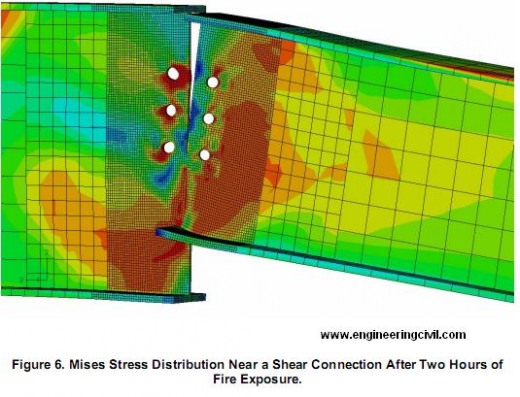 4. Discussion of Results
According to the failure criterion derived and the results of the thermal-stress analysis, the heat-weakened shear connection experienced complete failure after approximately two hours of fire exposure. The deformation and failure of the shear connection predicted by the Abaqus model are very similar to those exhibited in failed connections in WTC 5. The angles at which the bolts pried against the bolt holes are similar in the model and the specimen (Figure 7). Moreover, photographs of failed beam stems show web deformations indicative of the fulcrum action. 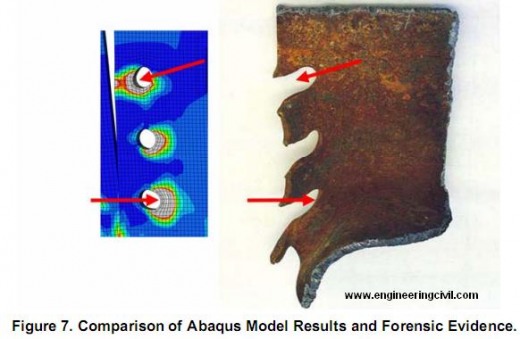 5. Conclusion
The sequentially-coupled, nonlinear thermal-stress modeling capabilities in Abaqus/Standard allowed study of the structural behaviors that led to the internal collapse of WTC 5. The analysis show that this collapse occurred approximately two hours into the heating phase of the fire after the simple span girders deflected enough to tear the connecting bolts out of the webs. It is not the precise time of failure which is aramount, but the fact that the structure failed uncharacteristically during the fire’s heating phase, rather than during the cooling phase when most fire-induced collapses occur.

The fire that caused structural collapse in WTC 5 was a severe, complete burn-out fire. As such, it is not unreasonable that the structure would experience substantial damage. However, the failure of the building to achieve the preferred performance, with the framing system surviving at least into the cooling phase of the fire, follows from the absence of analyses and design for fire exposure.

The present approach to fire protection engineering in much of the United States is primarily prescriptive, often employing propriety products to insulate structural elements and active fire suppression systems to control fire growth. Such approaches would not lead to an appreciation for vulnerabilities such as apparently existed in some of the detailing in WTC 5.

Analytical, performance-based approaches, more akin to common design for wind, seismic, and other environmental loads, are more likely to reveal critical aspects of building performance in fires, and provide engineers with the understanding they need to create designs that are robust, raise safety for occupants and firefighters, and are cost efficient.

In the case of WTC 5, relatively simple detailing changes would have enhanced the structure’s fire resistance. Slotted holes in the girder webs or increased spacing between the end of the girder stubs and the beginning of the simply supported center spans would have allowed more girder rotation without developing the prying action that tore out the girder webs. Keeping the shear connection near the face of the column would have reduced the temperature of this critical connection, thereby maintaining higher temperature-induced tear-out strengths during the fire.

In the more general case, we must acknowledge that many buildings in current use have unappreciated vulnerabilities. While analyzing and retrofitting for these vulnerabilities in existing buildings could be undertaken if justified for certain framing systems (e.g., perhaps for column-tree assemblies, if risk analyses and system testing verified heightened risk for the building system generally), finding the critical shortcomings in the present building stock would be a prohibitive exercise. However, modest expenditures of engineering effort during the design phase for new buildings can reveal fire performance weaknesses that can be avoided, often at minimal cost to construction.

We are thankful to Sir Matthew Ladzinski for submitting this report to engineeringcivil.com and also granting us rights to publish it on web. This report will help all civil engineers study the Failure Analysis of World Trade Center 5

This is really the great information. thanks sir

This is really nice paper which teaches how to take care of such steel structures.