ABSTRACT
The FLAT SLAB SYSTEM being used in majority of the constructions. It elevates more clear space in architecting the construction design in easy manner and duration of construction would be short due to the flat slabs size. Compare to the traditional concrete construction slab system is more viable due to the fact that it avoids the heavy beams, which are the big vulnerability in case of earthquakes. Objective of this paper is to investigate the behavior of flat slab system in few different use cases.

The behavior of flat slab is investigated in terms of the following factors:
1. Frequency
2. Base Shear
3. Storey level accelerations

Also this paper investigates about the combinations that can produce less punching shear at slab column joint.

INTRODUCTION
Flat slab based construction is a developing technology in India. A reinforced concrete slab supported directly by concrete columns without the use of beams, such slab is called flat slab. When drop panel have thickened portion of slab around column, that provides negative reinforcement in the slab column connections and it increase shear strength of slab. Column heads are flared profile around column and it also provide to increase the perimeter of critical section for shear.

Slabs of constant thickness, which do not have, drop panels or column capitals are called as flat plates. The strength of the flat plate structure is often limited due to punching shear action around columns. So they are predominantly used in low seismic areas. The performance of flat slab building under seismic loading is poor as compare to frame structure due to lack of frame action, which leads to excessive lateral deformation. This leads to instability in the structure. And also Transfer of lateral displacement induces moment at slab column connection, which is of complex 3-dimensional behaviour. Despite the advantages of flat slab, it fails to gravity loads by punching shear. It can be overcome by providing column drops in low seismic areas. But when these flat slab structures situated in seismic zones, the movements transferring from slab to column through shear increases further more and becoming more tendency to punching shear failure during earthquakes. Due to the flexibility of flat slab buildings, they must be combined with a stiffer lateral force resisting system in high seismic regions like shear walls, braces to reduce lateral loads on structural frame. When flat slab is used in combination with bracings, shear

wall for lateral load resistance, the column in building can be designed for only 25% of the design seismic force. Thus the behavior of a structure for dynamic loads can be determined by model analysis and dynamic behavior can be examined by considering the parameters as Storey drift, base shear, time period and acceleration of model.

Here, we are mainly depending on design of flat slab RCC structure in four different types. It may be mainly two parts, they are 1) with  drops , 2) without drop and these two models are modeled with shear walls at corners. When a flat slab structure referenced by clear from previous   literature  are unstable for seismic forces,  analytically investigating the behavior of flat slab during the earthquakes and checked for increase of punching shear from gravity loads to earthquake loads by taking one center column and one  exterior column in intermediate frame in model 1 and also checked for tendency of punching shear failure in flat slabs . The design has to be Response spectrum method is considered to analyze the structure by using ETABS software.

Here, FOUR models were created and all are analyzed for seismic loads.

For Seismic loading only 50% of the imposed load is considered. 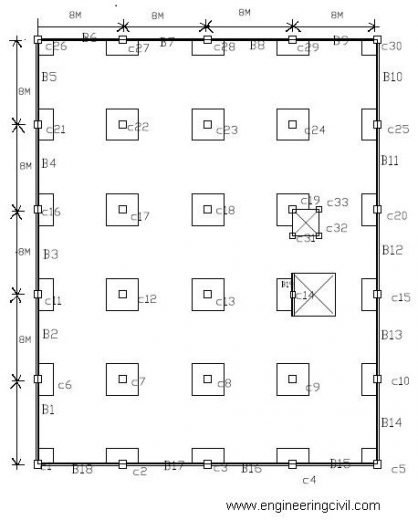 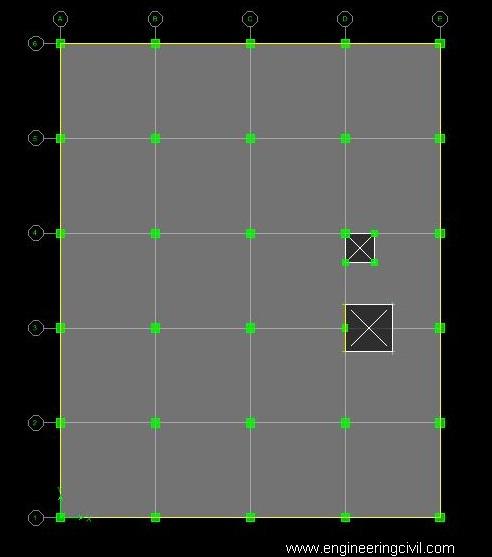 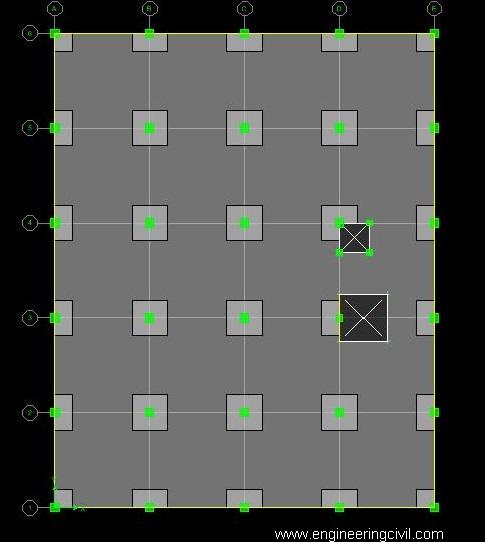 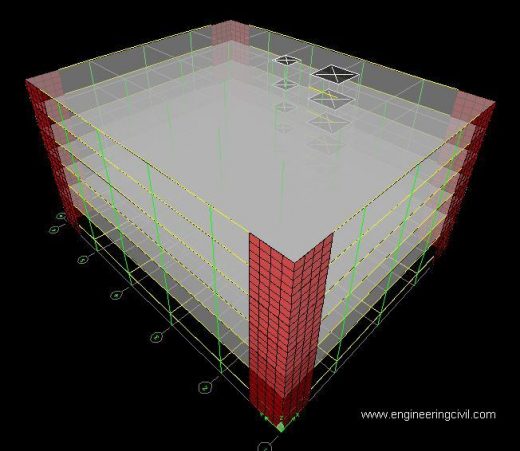 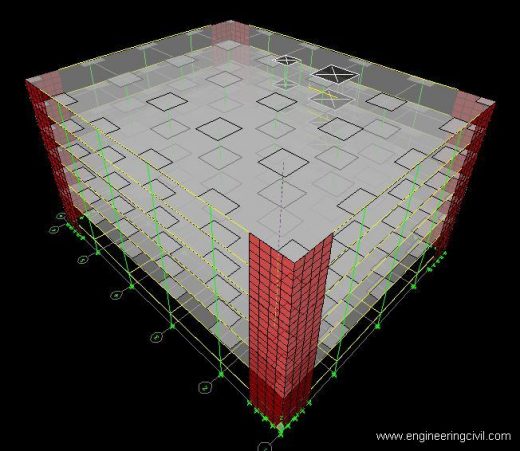 FIG5:Model 4(Flat slab structure with drop and shear wall together)

The number of modes to be considered in analysis should be such that the sum of total of model mass of all the modes considered is not less than 90% of total seismic mass of structure.

By considering 12 modes mass participation of flat slab building is achieved up to 94%.Therefore 12modes are considered for all models.

Table1: comparison of frequencies of mode shapes in all 4 models. 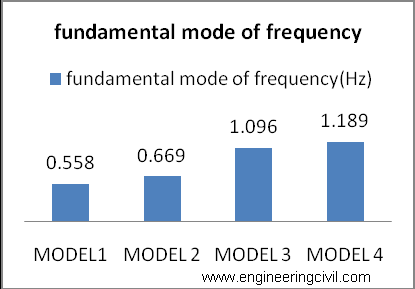 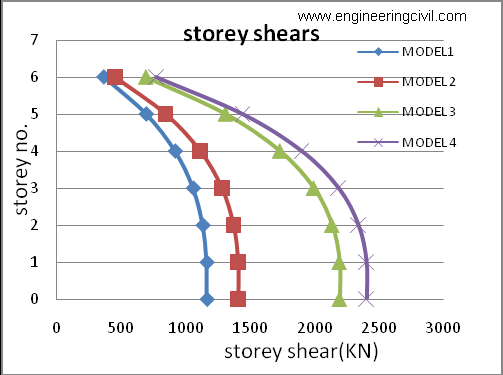 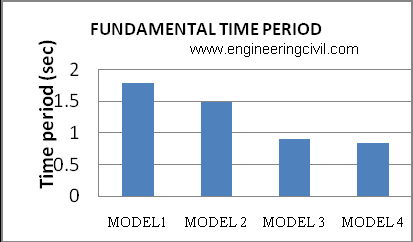 Graph 3: graph shown for storey shear in all 4 models.

Table4: comparison of storey displacements in x-direction in 4 models 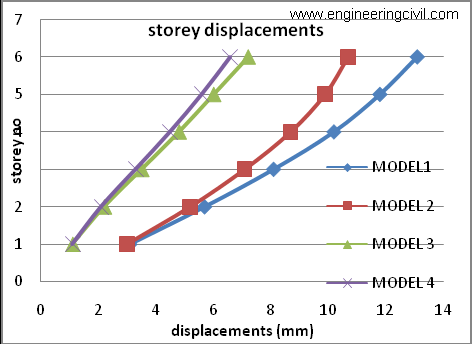 Graph4: graph shown for comparison of storey displacements in x-direction. 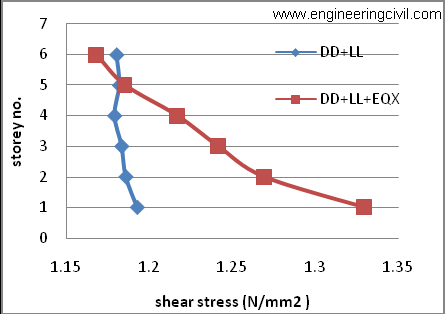 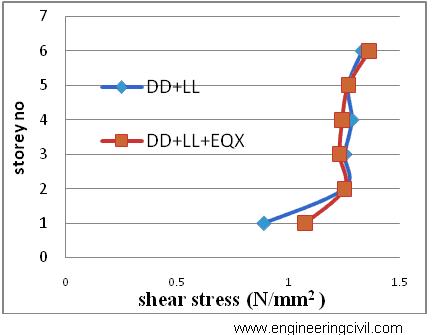 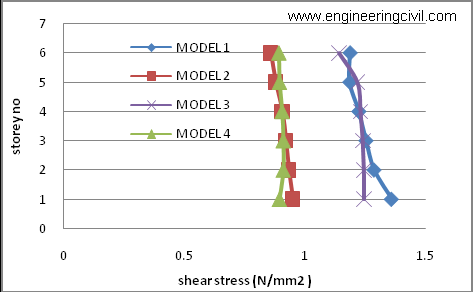 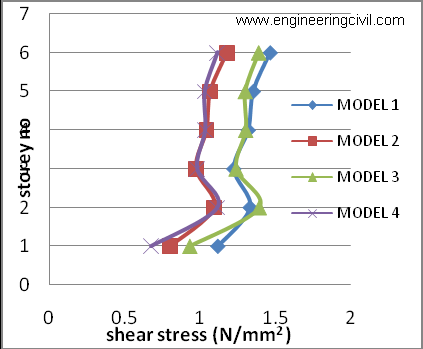 CONCLUSIONS:
Within the scope of present work following conclusions are drown

• Fundamental mode of frequencies of a flat slab structure increase 20% when drops panels are present, as further increasing of stiffness by providing shear walls those values increases to 96%.

• Provision of shear walls may not effective in reducing punching shear on intermediate storey’s but effective in top and bottom storey’s as shear wall attracts lateral moments from columns.

We at engineeringcivil.com are thankful to Er M.RAJAGOPAL REDDY for submitting this paper to us. We hope this will provide immense help to other civil engineers in understanding the Design of RCC Flat Slab Structure Under Earthquake Loading Using Etabs.

What are various types of Admixtures?