When we talk about moving from western suburbs to islands of Mumbai, the only way out till today was Mahim causeway. But today with the grand opening of Bandra Worli Sea Link Project by Sonia Gandhi would make the life of commuters much more easy. Earlier with the non availability of any other route, the distance of 8 km took nearly 40 minutes but with the opening of this Indian engineering marvel, the distance would be covered in just under 10 minutes.

Talking about the engineering side of this project, these two cable-stayed bridges, one 600-metre-long at Bandra channel and the other twin-tower supported 350-metre-long at the Worli channel are one of its kind in India. This eight lane bridge has a cable stayed tower which is of almost 43 storey building height. The Cable Stay system comprises 2,250 km of high strength galvanized steel wires which support this bulky 20,000 ton structure. Several teams of engineers from Canada, China, Egypt, Switzerland, Britain, Singapore, Thailand, Hong Kong, Serbia, Indonesia and the Philippines have worked on the project. 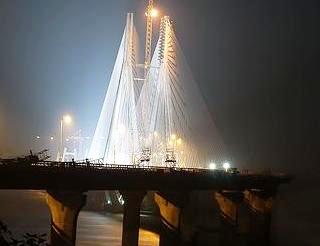 It is built with the cost of more than 1,650 crore and it took 10 years to built it. Construction was marred by litigation from environmentalists and fisherman. But finally it was built with much changes. But it is believed that it would save almost 100 crore per day in form of time and fuel.

Some other facts about Bandra Worli Sea Link

1.The bridge’s lighting is done at a cost of about Rs 9-crore (Rs 90 million) by Bajaj Electricals
2. Bandra-Worli sea link is likely to consume 1,000 KW power a day and this would be supplied by Reliance Power and the Brihanmumbai Electric Supply and Transport.
3. It is built as BOT i.e built, operate and transfer. A toll plaza is installed and each commuter has to pay for using this sea link

Here is a video we got hold on youtube. Thanks to our visitor – Sanjana who sent this link to us.

Now we all Indians enjoying Because At least In metros !! INDIA Shining !!

This Engineering Marvel is Constructed by HINDUSTAN CONSTRUCTION COMPANY,
and made the milestones,.Great……….

such a great clip i ever had visited……