A weir with a sharp upstream corner or edge such that the water springs clear of the crest is a sharp-crested weir.
All other weirs are classed as weirs not sharp crested. Sharp-crested weirs are classified according to the shape of the weir opening, such as rectangular weirs, triangular or V-notch weirs, trapezoidal weirs, and parabolic weirs. Weirs not sharp crested are classified according to the shape of their cross section, such as broad-crested weirs, triangular weirs, and trapezoidal weirs.

The channel leading up to a weir is the channel of approach. The mean velocity in this channel is the velocity of approach. The depth of water producing the discharge is the head.
Sharp-crested weirs are useful only as a means of meas- uring flowing water. In contrast, weirs not sharp crested are commonly incorporated into hydraulic structures as control or regulation devices, with measurement of flow as their secondary function. 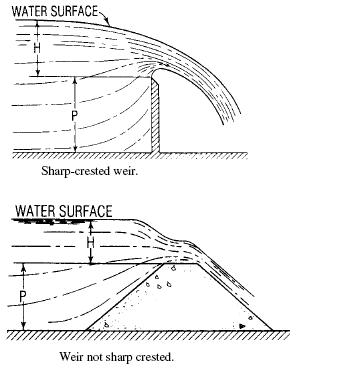 where
Q= discharge over weir, ft3/s (m3/s)
b= length of weir, ft (m)
h= vertical distance from level of crest of weir to water surface at point unaffected by weir drawdown (head on weir), ft (m)
n= number of end contractions (0, 1, or 2)
h0= head of velocity of approach

The discharge of triangular weirs with notch angles of 30°,
60°, and 90° is given by the formulas as

h is as defined above in the Francis formula.

The Cipolletti weir, extensively used for irrigation work, is trapezoidal in shape. The sides slope outward from the crest at an inclination of 1:4, (horizontal/vertical). The discharge is

where b, h, and Q are as defined earlier. The advantage of this type of weir is that no correction needs to be made for contractions.

The discharge of a broad-crested weir is

We are looking for the formula for a broad crested parabolic weir. Can you please direct us. Thanks, Ron

What si the correct formula can be used and what is the C value. I hope u can reply quickly
TQ

I WISH I COULD BE PART OF YOU,BUT I AM FINANCIALLY LACK..My experience during when the experiment was conducting is very low,pls what can you do to help me

i want to know the values of C for broad crested weir and for all type of weirs with reference to some book or paper etc.

Does flow net in dams has any thing 2 do with weirs?

can you simplify these fomulas of weires nd plz explain the H……..

The coefficient of 3.33 for a sharp crested weir is appropriate only for US Customary Units (ie, ft and sec),
if u are using meters and s, use a coeficient of 1.8

For metric units the broad crested weir C is 1.6 or 1.7. Best to consult a text book until this site is repaired.

What is the purpose of the discharge coefficient in weir flow?

is there a source for these formulas?