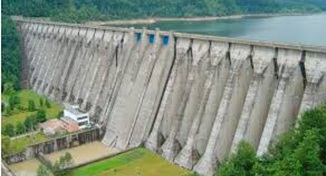 Buttresses are?
Buttresses are the thin walls of triangular profile shape with a characteristic sloping upstream face. They are usually spaced at equal intervals along the length of the dam and are supported either on a continuous mat foundation or on a separate spread footing. 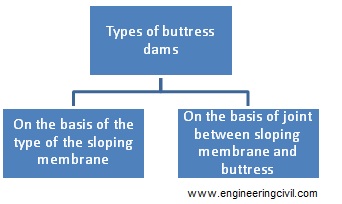 • Fixed or continuous deck slab type buttress dams
In this type of buttress dam the deck slab is cast monolithic with the buttress and it is in the form of a continuousslab. Thus in this case the reinforcement is provided both on upstream and downstream faces of the slab because of reversing bending moments and there is a possibility of upstream reinforcement being corroded. In this type of dam the deck slab is relatively thin

In addition to the above noted deck slab type buttress dams, there are two more types of these dams as following:
• Columnar type buttress dams: This type of dams consist of continuous flat slab of reinforced concrete supported on a number of inclined columns instead of buttresses. The columns are also reinforced and are stiffened by a two-directional system of struts.

Multiple –arch type buttress dams
In this type of buttress dam the sloping membrane or deck consists of a series of reinforced-concrete arches supported by a number of buttresses. The upstream face of the dam is usually inclined at 45.The arches are cast monolithic with the buttresses.

The massive head type buttress dams may be further subdivided on the basis of the shape of the buttress head into the following 3 types:

Here, the sloping membrane or deck is constructed monolithic with the buttresses. As such for these dams the influence of foundation settlement, temperature variation and shrinkage of concrete are significant and provisions have to be made for these in the design.

Here, the sloping membrane or deck is not constructed monolithic with the buttresses. As such dams are flexible and hence the influence of settlement of foundation, temperature variation and shrinkage of concrete are not significant for these dams

The intermediate or semi-rigid buttress dams are in between the rigid and articulated buttress dams. Thus these dams eliminate the undesirable rigidity but also do not possess high degree of articulation or flexibility.