AIM OF THE EXPERIMENT:
To determine the undrained shear strength of a sandy to silty soil. 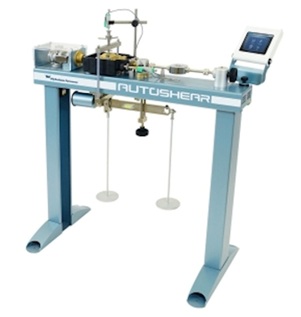 SOIL SPECIMEN:
Undisturbed specimen- Specimen of required size shall be prepared in accordance with IS 2710 (Part-1)- 1983.

REMOULDED SPECIMEN:
a) Cohesive soil may be compacted to the required density and moisture content, the sample extracted and then trimmed to the required size. Alternatively, the soil could also be compacted to the specified density and moisture content directly within the shear box after fixing the two halves of the shear box together by the means of fixing screws.

b) Cohesionless soil may be taped in the shear box itself with the base plate and grid plate or porous stone as required in place at the bottom of the box.

The cut specimen shall be weighed and trimmings obtained during the cutting shall be used to obtain the moisture content. Using this information, the majority dry density of the specimen within the shear box shall be determined.

THEORY
The direct shear test is one among the oldest strength tests for soils. In this laboratory, a direct shear test device will be used to determine the shear strength of a cohesionless soil (i.e., angle of internal friction (ɸ). From the plot of shear stress verses the horizontal displacement, the maximum shear stress is obtained for a specific vertical confining stress. After the experiment is run several times for various vertical confining stresses, a plot of the utmost shear stress verses the vertical (normal) confining stress for every of the tests is produced. From the plot, a straight-line approximation of the Mohr – Coulomb failure envelope curve can be drawn, ɸ may be determined, and for cohesionless soils (c=0), the shear strength can be computed from the following equation:

RELEVANCE OF THE EXPERIMENT:

RESULT AND DISCUSSION
The cohesion intercept and angle of shearing resistance are determined plotting graph between shear stress at failure and normal stress. This test is simple and fast for sands. The sample is normally saturated before the test is run. For this experiment we use clean sand as a sample so there is no problem as the pore pressure dissipates readily. However, in case of highly plastic clays, it is merely necessary to have suitable strain rate so that the pore pressure can dissipate with time. Direct shear test is useful when cohesionless soil are to be tested. In case of cohesive soil drainage time will be more and there is no control over drainage as in case of triaxial test hence it is suitable for sandy soils.