Noise Pollution from Vehicular Traffic from Selected Junctions in Bengaluru

ABSTRACT
Noise pollution can be defined as the unwanted sound that is released to the environment and disturbing the human beings. Sources of noise pollution include industrial sources, non-industrial sources, vehicles, uncontrolled use of loud speakers, construction activities such as drilling, etc. Noise levels from vehicles through engines and horns are the main cause of concern in cities and may potentially contribute about 60% of total noise pollution. An attempt was made to measure noise levels emanating from vehicles on selected roads within a radius of approximately two kilometers from St Joseph’s College. These are major roads that witness heavy traffic during peak and non-peak hours. Traffic volume and noise levels were measured at various junctions on these roads during peak and non-peak hours. The study also includes remedial measures that can be implemented to reduce the noise levels.

INTRODUCTION
St Joseph’s College is located in the heart of Bengaluru city and is surrounded by major roads that house both residential and commercial establishments. Thousands of vehicles ply on these roads every day. Vehicular traffic creates noise (through engine and honking) and these roads are no exception. It was therefore proposed to measure noise levels around the college within a radius of two kilometers at selected junctions where there would be heavy traffic. This project was taken up as a preliminary study.

Vehicles are the main source of noise in cities and may contribute to about 60% of total noise pollution. Noise pollution is measured in the unit of decibels (dB). When noise is above 45 dB, it will affect the sleep patterns in human beings. At 120 dB, there is a potential for pain in the ears (the noise level of an ambulance siren is about 90-95 dB). Poor urban planning gives way for noise pollution. There is direct a link between noise and health. Noise pollution can cause high blood pressure, lack of concentration, stress, and sleep disruption1.

Government of India has developed standards2 for the noise levels covering different areas. The standards are shown in the table below:

Table 1 – CPCB Standards with respect to Noise in Ambient Air

Note: Silence zone is an area comprising not less than 100 metres around hospitals, educational institutions, courts, religious places or any other area which is declared as such by the competent authority

At lower traffic speeds (typically less than 60km/hr), engine and exhaust noise tend to dominate. Tyre noise is a component of vehicle noise which significantly increases with speed. Studies suggest that at speeds between 30 and 50 km/hr, tyre noise of cars increases to a level which dominates the overall vehicle noise. For trucks, this ‘cross-over’ point tends to occur between 40 and 80 km/hr. 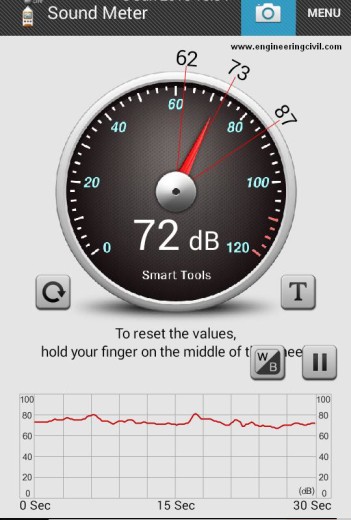 TENMA 72-860 (manufactured by Swan Environmental Pvt. Ltd.) sound level meter was used for noise level measurements. The traffic survey was performed at each junction taking four fifteen minute counts. The sound level meter was held at a height of three and a half feet above the road level as suggested by Central Road Research Institute3. The microphone was covered with a foam cover to prevent any dust or wind damage and was pre calibrated. Sound Level Meter Lite (version1.6.1) was used for noise level measurements. The team members counted the vehicles. A map (figure 3) was created indicating the locations of the measurements. Vehicular count for 2-wheelers, autosrickshaws, cars/vans/jeeps/SUVs and buses / trucks (since their numbers are low) were taken and tabulated to get the total. The noise level surveys were carried out at the 10 junctions as shown in Figure 3 for both peak and non-peak hours. 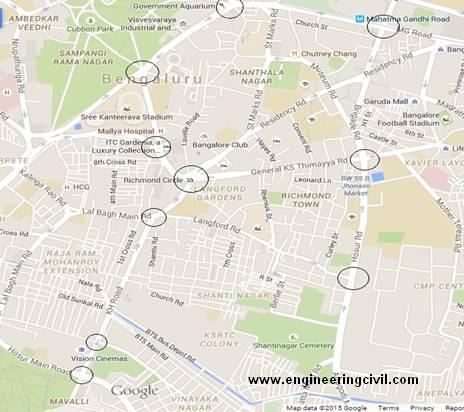 1. Richmond Circle
Richmond Circle which is a confluence of 5 major roads (including a flyover) is a hub of traffic activity during peak and non-peak hours. This could be due to the fact that all of these roads lead to important locations of the city. Residency Road (running north-east with respect to the college), General KS Thimayya Road (East), Raja Rammohan Road (West), Lalbagh Main Road (South-West to Residency Road) and Mission Road to Residency Road Flyover makes up the junction. The area lacks any green cover. Hence the maximum noise level can easily exceed 80dB. Average noise level for 1-hour during peak time was 77dB and for non-peak time it was 82.3dB. The non-peak hour noise level is higher than the peak hour though the number of vehicles is higher for peak hour.

2. Junction between Langford road and Hosur Road
The three way intersection between Langford road and Hosur Road does have a moderate to high flow of traffic during peak hours. The place does have a few trees on the sides, thereby reducing the noise levels by a few decibels. The average noise level for 1-hour during peak hour was 78.3dB and for non-peak hour it was 77.4dB.

3. General K S Thimayya Road-Hosur Road Junction
This is a 4-way junction with comparatively equal flow of traffic in both peak and non-peak hours. The average noise level for 1-hour during peak time was 78.4dB and for non-peak time, it was 77.4dB.

4. Near ITC Gardenia
This junction which is near to important landmarks in Bangalore including Vittal Mallya hospital, Kanteerva Stadium and ITC Gardenia has a large volume of traffic flow possibly due these establishments. It is a complex junction with two main roads- Raja Rammohan Road and Vittal Mallya Road coming into the junction as well as a smaller 1st Main Rd from Double Road joining the Raja Rammohan Road with two small lanes interlinking the two bifurcations of Raja Rammohan Road. There is considerable amount of green cover in the area. The average noise level for 1-hour during peak time was 76.6dB and for non-peak time, it was 76.1dB. The non-peak hour noise level is slightly higher than the peak hour and the number of vehicles is also higher for non-peak hour.

5. Kasturba Road- Vittal Mallya Road Junction
This is a complex junction with good amount of greenery associated with it. Still there is no considerable decrease in the noise level. The traffic is regular during the day time resulting in similar or greater noise levels in non-peak hours when compared to peak hours. The average noise level for 1-hour during peak time was 76dB and for non-peak time, it was 77.2dB. The non-peak hour noise level is slightly higher than the peak hour though the number of vehicles is higher for peak hour.

6. M G Road-Brigade Road Junction
As this is one of the busiest shopping areas in Bengaluru and there is high traffic volume during day time. There is no tree cover to absorb noise. The metro rail lies close to this junction. The average noise level for 1-hour during peak time was 77.7dB and for non-peak time, it was 78.2dB. The non-peak hour noise level is slightly higher than the peak hour though the number of vehicles is higher for peak hour.

7. Near Victoria Statue, Cubbon Park
At the confluence of Kasturba Road, Queen’s Rod, M.G. Road and Lavelle Road, this junction has high traffic flow during peak hour. The average noise level for 1-hour during peak time was 79.4dB and for non-peak time it was 75.4dB

8. Near Lalbagh Botanical Garden
One of the two large green lungs of the city (the other being Cubbon Park), Lalbagh is an iconic landmark of the city located in Central Bengaluru. There is a circle in the centre (Siddapur circle) which is joined by the K.H. Rd, Hosur Main Rd and the Siddapura Road from the main gate of Lalbagh botanical gardens. The noise level is comparatively lower in this area. The average noise level for 1-hour during peak time was 76.7dB and for non-peak time, it was 72.2dB

9. Junction outside St. Joseph’s College (Between Langford Road & K.H. Road)
This junction consists of Mission Road, Lalbagh Main Road, Langford Road and K.H. Road with the Kengel Hanumanthaiah Flyover, this area has moderate traffic flow compared to other junctions. The noise levels are high due to the honking by impatient drivers. The average noise level for 1-hour during peak time was 79.6dB and for non-peak time, it was 75.8dB.

10. Junction between H Siddaiah Road and Double Road
This junction recorded least number of vehicular traffic during both peak hours and non-hours compared to the other junctions. The noise level during peak hour is high. The average noise level for 1-hour during peak time was 80.6dB and for non-peak time, it was 70.1dB. 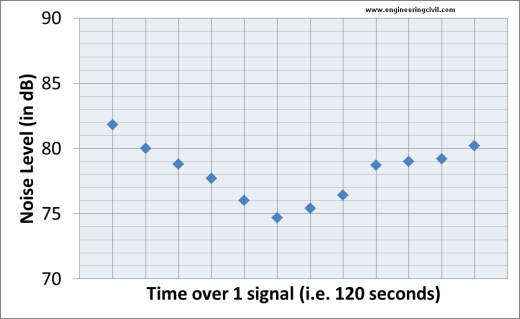 An interesting observation was made as there was a variation in noise levels at a traffic signal. When the green light turned to red, the noise level decreases and remained constant for a while before increasing when the amber to green light transition was in the process. This was due to the horns and revving up of engines.

Conclusions
Based on the experimental investigation, the following conclusions were drawn:

2) The highest decibel level was found at Richmond circle with 82.3dB during non-peak hours.

3) The lowest decibel level was found at the junction between H. Siddaiah Road and K.H.Road with a noise level of 70.1 dB during non-peak hours.

5) The noise levels near the Mallya Hospital were high. The average noise level during peak hour was 76.6 dB and it was 76.1 dB during non-peak hour.

1. Enforcement – Increase enforcement through deployment of more number of traffic police on the roads to check on vehicle noise. Vehicle horns must be checked by the enforcing agencies on a regular basis as many vehicles use high decibel horns that are changed from the original ones.

2. Noise barriers- They are solid obstructions built between the highway and the homes along the highway. Effective noise barriers can reduce the noise levels by 10-15 decibels, cutting the loudness of the traffic in half. Barriers can be formed from earth mouths along the road (usually called earth beams) or from high, vertical walls. Earth beams have a natural appearance and are usually attractive.

3. Spreading public awareness regarding noise pollution and its effects through media such as TV, internet, newspaper, radio, etc. Educate drivers to reduce honking.

4. Vegetation – If the height and width of the tree and density of the foliage is optimal, it can prevent noise pollution to a large extent. 200 feet width of dense vegetation can reduce noise by 10 decibels. Trees such as Azadirachta Indica (Neem), Auricularia Columnaris (Cook pine), Polyalthia Longifolia (Mast tree) and Saraca Ashoka (Ashoka tree) some of which already exist in the street sides of Bengaluru are quite efficient in dampening the noise levels due to their dense foliage. They grow to such sizes that they absorb good amount of noise.

5. Removing the words “SOUND OK HORN” on the back of the vehicles.

6. Signboards – Banning use of horns in silence zones. Install big signboards indicating silence zones (see figure 10 below) and fines that would be levied for honking.

Acknowledgement
We would like to thank Karnataka State Council for Science and Technology (KSCST) for approving and funding the project thereby letting us gain valuable practical knowledge. We are thankful to Mr. John Paul for his support. Thanks to Mr. Prabhakar and Dr. Ebenezer Wilson from the Department of Environmental Science for helping us with certain aspects of the study. A special thanks to our classmate Mr.Vineeth Jason from the environmental science batch for helping us take the survey by providing us with his valuable time.

We at engineeringcivil.com are thankful to Mr. Mahesh Kashyap for submitting this very useful paper to us.

How to Make a Concrete Floor Slip-Resistant

Ways to incorporate sustainability into the house