Define Contour Line
A Contour line is an imaginary outline of the terrain obtained by joining its points of equal elevation. In our example of the cone, each circle is a contour line joining points of same level.

Define Horizontal Equivalent (HE)
Horizontal equivalent is the horizontal distance between two consecutive contour lines measured to the scale of the map. 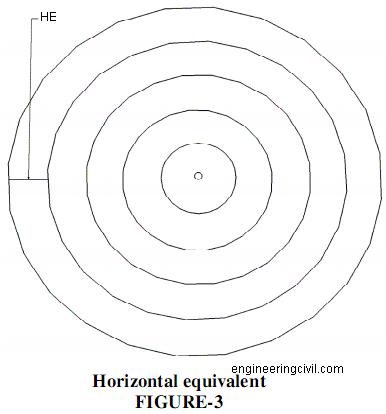 Gradient
Gradient represents the ascending or descending slope of the terrain between two consecutive contour lines. The slope or gradient is usually stated in the format 1 in S, where 1 represents the vertical component of the slope and S its corresponding horizontal component measured in the same unit.

The gradient between two consecutive contour lines can also be expressed in terms of Tan Q(theta) as follows:
Tan Q (theta) = CI / HE … both measured in the same unit.

We at engineeringcivil.com are thankful to Mr Ramasesh Iyer for submitting this useful information to us.

I would like to thank you for this helpful notes about contouring and Engineering survey in general. this is very interesting for me because it helped me to understand very well what I have learned in class and help me to apply it on field.

please keep on updating me with counter lines upgrades