Give Introduction of Contouring

Contouring is the science of representing the vertical dimension of the terrain on a two dimensional map. We can understand contouring by considering a simple example.

Let us assume that a right circular cone of base 5m diameter and vertical height 5m is standing upright on its base. Let the base be resting on a horizontal plane at zero level as shown in Figure 1. 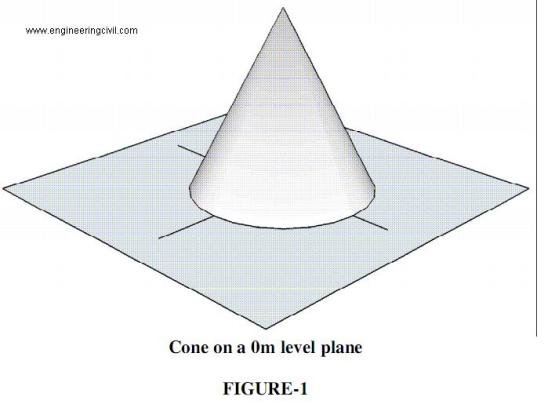 At zero level, the outline of the cone will be a circle of 5m diameter. This circle is the contour line at 0m elevation for the cone. We draw this first contour line on paper to a convenient scale.

Similarly, we continue to draw the outline of the cone at 2m, 3m, 4m and 5m levels on our contour map. Our contour map for the conical object is now ready. The circles on the map are called contour lines. (see figure-2) 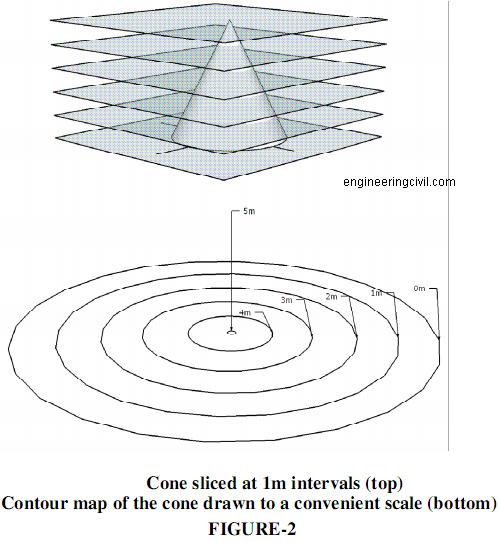 Like the cone in our example, hills project upwards from ground level. The contour map of a hilly terrain will be similar to that of the cone, except that instead of perfect circles, the contour lines would be of
irregular shapes. The important point of similarity to note here is that hilly terrain would be represented by contour lines with increasing elevation towards the centre.

In contrast to this, a pond or depression would be represented by contour lines with decreasing elevation towards the centre.

We at engineeringcivil.com are thankful to Mr Ramasesh Iyer for submitting this useful information to us.

8 comments on "Give Introduction of Contouring"

the above example is easy to understand

me student of civil engineer,thanks because i have easily understood what contouring means.

It’s very easy to understand the contour concept.. All thanks to you