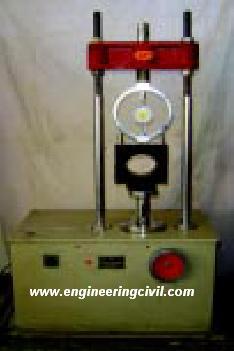 The sample needed is
From Marshall stability graph, select proportions of coarse aggregates, fine aggregates and filler in such a way, so as to fulfill the required specification. The total weight of the mix should be 1200g.

Procedure to determine Marshall stability of bituminous mixture
i) Heat the weighed aggregates and the bitumen separately upto 170oC and 163oC respectively.

iv) Remove the specimen from the mould by gentle pushing. Mark the specimen and cure it at room temperature, overnight.

vi) Before testing of the mould, keep the mould in the water bath having a temperature of 60oC for half an hour.

vii) Check the stability of the mould on the Marshall stability apparatus.

REPORTING OF RESULTS
Plot % of bitumen content on the X-axis and stability in kg on the Y-axis to get maximum Marshall stability of the bitumen mix. A sample plot is given 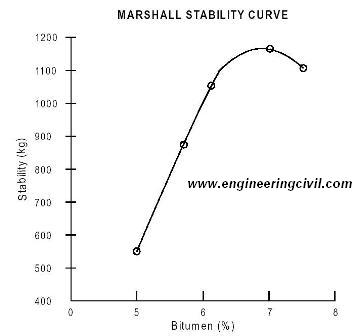 29 comments on "Determining The Marshall Stability of Bituminous Mixture"

hai,
this is lokesh asst. eng. roads in QA/QC.this is very helpfull to all juniors as well as
seniors. pls give some other field variations on the mix, gradations and necessary corections
on the design mix required to suit the loading conditions etc,…..

Is there any IS specified for this test? Is any mannual?
How come the weight of mix to be 1200gm?

1200g usually compacts enough to give just the required core height for stability and flow testing.

It is very nice and appropiate information ..

This is a very good way learning how to use stability test for young civil engineering students, Thanks.

I am a student of federal university of technology minna niger state nigeria, am doing my final year project on palm kernel shells as partial replacement for fine aggregate in alsphat concrete, please i need ur asistance on this my project topic. Thanks.

Thanks for needful Information

I want to know that why this test is not being done for BM (Bitumen Macadam).Having Bitumen Content 3 %(present) .Kindly reply as earliest.

Sir,I want to know what is stability and flow value in marshall stability test.

could there be any other test for stability and flow?

I want to know the density analysis of Marshall method.

i want to know about blending of aggregates.?how to blend the aggregates for Marshall mix design…im doing project on that..?

how to take the reading of the marshal stability test