Are washers necessary for proper operation of bolts?

“Fastener” is a general term used to describe something which is used as a restraint for holding things together or attaching them to other things.

The main physical distinction between screws and bolts is that screws are entirely full of threads while bolts contain shanks without threads. However, a better interpretation of the differences between the two is that bolts are always fitted with nuts. On the contrary, screws are normally used with tapped holes.

High friction grip bolts are commonly used in structural steelwork. They
normally consist of high tensile strength bolts and nuts with washers. The bolts are tightened to a shank tension so that the transverse load across the joint is resisted by the friction between the plates rather than the bolt shank’s shear strength. 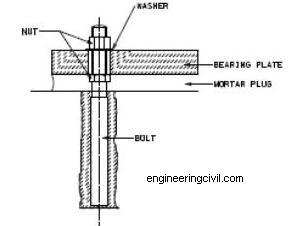 The purpose of installing washers in a typical bolting system is to distribute the loads under bolt heads and nuts by providing a larger area under stress. Otherwise, the bearing stress of bolts may exceed the bearing strength of the connecting materials and this leads to the loss of preload of bolts and the creeping of materials. Alternatively, flanged fasteners instead of using washers could be adopted to achieve the same purpose.

Why is Revit Getting Popular Among Civil Engineers?

3 comments on "Are washers necessary for proper operation of bolts?"

what are cost and life comperision of HSFG bolts over MS and HT Bolts.

Is there any difference between HSFG Bolts and HT(High tension Bolts)?If so,where we will use and in which condition?

1.For normal bolt under tension, how to ensure the right amount of torque is applied so it does the pretension is not too high and when coupled with the woking tensile force does not exceed its yield strength.

2. For HSFG how to ensure adequate tension to achieve the design friction.

3. How to calculate the tensile in bolt correspond to torque applied.