What is shock transmission unit in bridges?

Shock transmission unit is basically a device connecting separate structural units. It is characterized by its ability to transmit short-term impact forces between connecting structures while permitting long-term movements between the structures.

If two separate structures are linked together to resist dynamic loads, it is very difficult to connect them structurally with due allowance for long-term movements due to temperature variation and shrinkage effect. Instead, large forces would be generated between the structures. However, with the use of shock transmission unit, it can cater for short-term transient loads while allowing long-term movements with negligible resistance. It benefits the bridge structures by acting as a temporary link between the structures to share and transfer the transient loads. 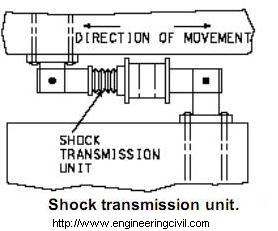