What is Bond? What are the different types bonds used in brick masonry?

What is Bond?
A bond is formed when cement mortar fills a groove formed by adjacent bricks being laid side by side. Bonding helps distribute loads evenly over a large area. These bonds are like patterns in which bricks are laid, which can be used for brick walls and paving. They can also be used for concrete blocks and masonry construction. 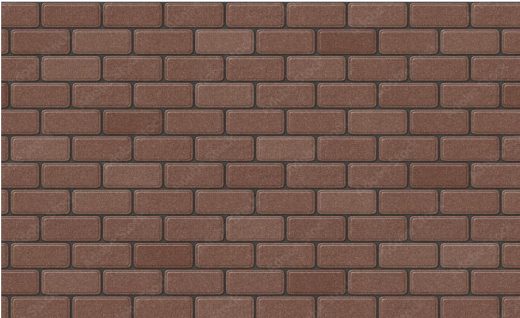 A stretcher bond, also known as a running bond, is formed if the bricks are laid so that only the stretchers are visible. In the brickwork, the simplest repeating pattern is the stretcher bond. Stretcher bond, on the other hand, has the drawback of being unable to effectively bond adjacent bricks in full-width thick brick walls. Only one-half brick thick walls, such as a half-brick thick partition wall, are suitable for their use.

In greater span and height cases, stretcher bond-built walls aren’t stable enough to stand independently. As a result, they require periodic support in the form of brick masonry columns. Regarding the outer facing of steel or reinforced concrete framed structures, stretcher bonds are frequently used. Cavity walls can also be covered in this. Boundary walls, gardens, and other outdoor spaces benefit from using these types of walls.

2. English bond:
The English bond is a pattern created by alternately laying stretchers and headers in brick masonry work. On the stretchers below, the headers are laid out in alternate rows, vertically aligned. The queen closer is used after the first header in each heading course to break the continuity of vertical joints at the beginning and end of a wall. Useful at corners in walls made of brick, queen closers are a type of half-brick. 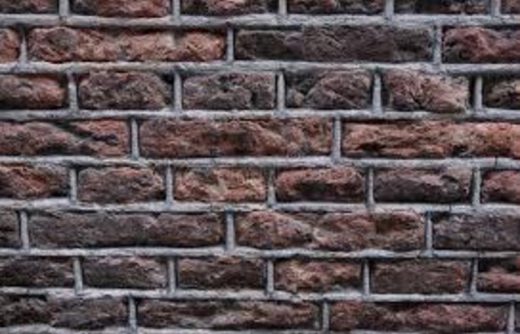 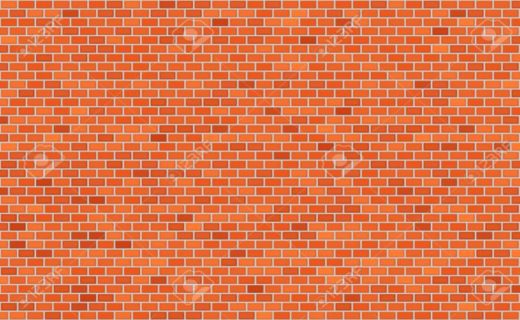 It is a 9cm x 9cm square face of the brick that serves as the “header” All of the bricks in a wall are used as headers in these bonds. Header bonds can also be referred to as heading bonds. Walls with a half-brick thickness are constructed using the Stretcher Bond, and white walls with a full brick thickness are constructed using this bond. The overlap in these bonds is kept to half the brick’s width. Alternate courses of three-quarter brickbats are used as quoins. 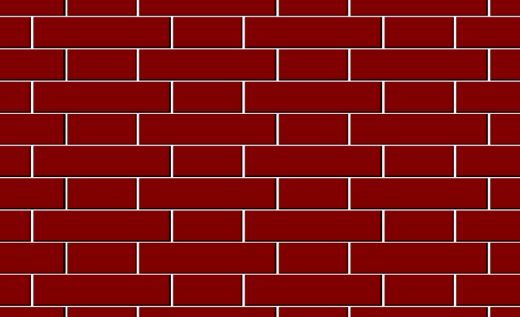 The construction of this bond is extremely difficult and requires a high degree of skill, as all vertical mortar joints need to be aligned vertically for the best and most impressive results. Closers install alternate courses next to the quoin header to break vertical joints during subsequent courses. Bats are used for walls with an odd number of half bricks in thickness.

Even though Flemish bonds have a more attractive appearance, they are weaker than English bonds when it comes to supporting the weight of a wall. For brick walls, the Flemish bond can be used, but for plastered walls, the English bond is more appropriate.

There are two types of Flemish bonds:

ii) Double Flemish Bond:
The Double Flemish Bond has a similar appearance from both sides of the face in the front and back elevations, i.e., it is made up of alternating stretcher and header in each course. This type of bonding is less strong than the English bond.

5. Garden Wall Bond:
As a garden or boundary wall, this type of bond is ideal for one-brick thick walls. With a garden wall bond, a wall can be built quickly and cheaply, and each side will look the same. Dwarf walls and other structures that aren’t subjected to much stress can use this type of bond, which isn’t quite as strong as the English bond. The outer leaves of cavity walls may be constructed with this bond due to its attractive appearance. 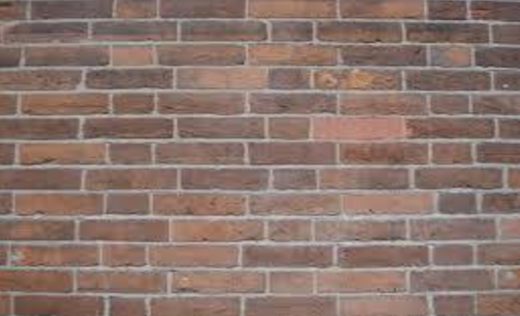 Stretcher, header, and Stretcher models are used in the Flemish bond. It’s also known as “Sussex Bond.” Instead of having one stretcher and one header, this type of bond has three stretchers and one header in the same course. It is sometimes called “balanced bonding.” That’s clear from the picture. There are two Flemish bonds in the Flemish garden wall bond: one has three stretchers for every header, and the other has two stretchers for every header. 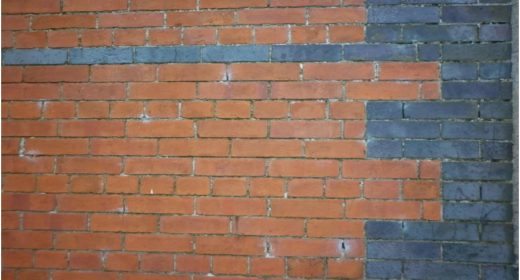 Bricks in this type of bonding are arranged similarly to those in English bonds, except that the heading courses are only inserted every four or six courses. Three courses of stretchers typically accompany one course of headers. On the heading course, the necessary lap is provided by a queen closer placed next to the quoin header. 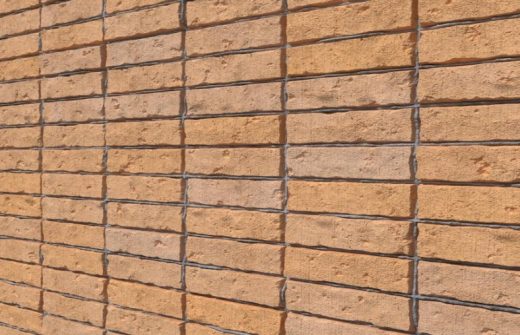 In bond construction, bricks are placed one on top of the other, joints running vertically down the length of the wall. Bricks can also be stacked vertically or horizontally. This bond is weak and frequently structurally unsound because of the minimal bonding caused by the joint alignment unless wire bed-joint reinforcement is installed in every horizontal course or, in cases where loading is moderate, in every alternate course. It is frequently applied as a rain screen and solely for decorative purposes. 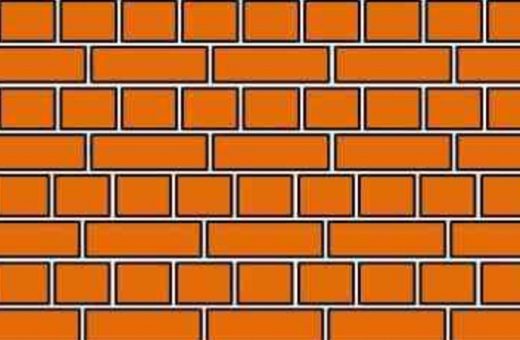 A facing bond is a brick bond in which the bricks are laid so that a header course comes only after several courses of stretcher course. It is most commonly used to build thick walls. Bonding the two different thicknesses of the facing wall and the backing wall can be extremely beneficial.

However, the number of joints in the facing and backing face is not equal due to the uneven load distribution caused by the wide range of thicknesses. The uneven settlement of the masonry walls may also result from this non-uniformity.

9. Raking Bond:
It is a brick bond in which the bonding bricks are laid at an angle other than zero or ninety degrees. English bond walls built this way are more stable in the long run because of this arrangement. In this method of bonding the two halves, a wall’s external stretchers are filled with bricks tilted toward the wall’s face. A wall’s height is divided into sections where this bond is inserted. 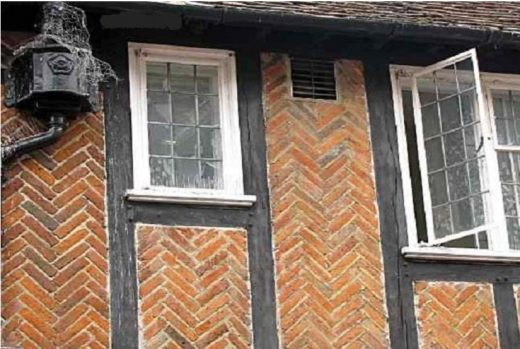 There are two types of racking bonds:
i) Herring-bone Bond:
This type of bond is best suited for walls with a minimum thickness of four bricks or greater. Bricks are arranged at a 45-degree angle from the center in two directions in this arrangement of brickwork. Bonds of this type can also be found on brick pavements.

ii) Diagonal Bond:
A wall with a thickness of two to four bricks is best suited for this bond. In most walls, this bond is introduced every fifth or seventh course or so of the height. The bricks are arranged so that corners of the series remain in contact with the stretchers in this bond.

10. Zig Zag Brick Bond:
A zigzag bond is a bond in which the bricks are laid in a zigzag pattern throughout the joint. The Herring-bone and zigzag bonds are examples of the same type of bond. It is used for paving works in residential constructions, such as floors, and footpaths, because of its attractive appearance. Despite this, the zigzag bond cannot be used to build masonry structures’ main walls because it is not loading bearing. 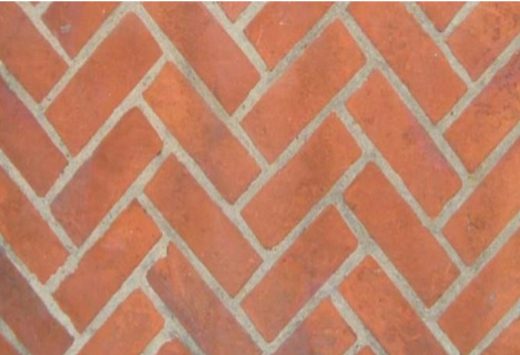 Conclusion:
A bond is the arrangement of bricks or stones in each course to prevent vertical joints in two successive courses, on the face or in the body of a wall, and to achieve maximum interlocking. Brick bonds are typically used in masonry work and resemble the patterns used in the placement of bricks. They can be used for both brick walls and paving, as well as for concrete blocks and other types of masonry construction.

The strength and beauty of brick walls and structures can only be achieved if the bricks are bonded properly. In essence, the quality of the bonds determines the entire brickworks’ operation.