What are the differences among Warren Truss, Howe Truss and Pratt Truss?

What are the differences among Warren Truss, Howe Truss and Pratt Truss?

A truss is a simple structure whose members are subject to axial compression and tension only and but not bending moment. The most common truss types are Warren truss, Pratt truss and Howe truss.

Warren truss contains a series of isosceles triangles or equilateral triangles. To increase the span length of the truss bridge, verticals are added for Warren Truss.

Pratt truss is characterized by having its diagonal members (except the end diagonals) slanted down towards the middle of the bridge span. Under such structural arrangement, when subject to external loads tension is induced in diagonal members while the vertical members tackle compressive forces. Hence, thinner and lighter steel or iron can be used as materials for diagonal members so that a more efficient structure can be enhanced.

The design of Howe truss is the opposite to that of Pratt truss in which the diagonal members are slanted in the direction opposite to that of Pratt truss (i.e. slanting away from the middle of bridge span) and as such compressive forces are generated in diagonal members. Hence, it is not economical to use steel members to handle compressive force. 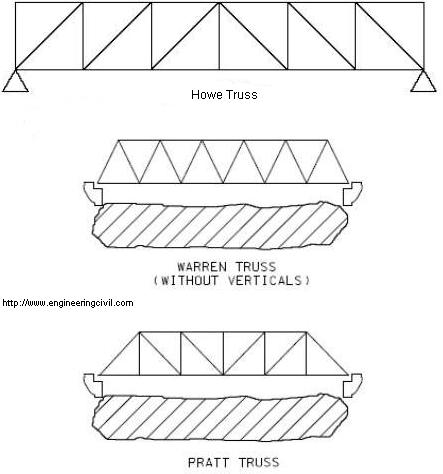