ABSTRACT
Over 300 million tones of industrial wastes are being produced per annum by chemical and agricultural process in India. These materials pose problems of disposal and health hazards. The wastes like phosphogypsum, fluorogypsum and red mud contain obnoxious impurities which adversely affect the strength and other properties of building materials based on them. Out of several wastes being produced at present, the use of phosphogypsum, flurogypsum, lime sludge, hypo sludge, red mud, and mine tailing is of paramount significance to protect the environment.

Paper making generally produces a large amount of solid waste. Paper fibers can be recycled only a limited number of times before they become too short or weak to make high quality paper. It means that the broken, low- quality paper fibers are separated out to become waste sludge. All the inks, dyes, coatings, pigments, staples and “stickies” (tape, plastic films, etc.) are also washed off the recycled fibers to join the waste solids. The shiny finish on glossy magazine-type paper is produced using a fine kaolin clay coating, which also becomes solid waste during recycling. This paper mill sludge consumes a large percentage of local landfill space for each and every year. Worse yet, some of the wastes are land spread on cropland as a disposal technique, raising concerns about trace contaminants building up in soil or running off into area lakes and streams. Some companies burn their sludge in incinerators, contributing to our serious air pollution problems. To reduce disposal and pollution problems emanating from these industrial wastes, it is most essential to develop profitable building materials from them. Keeping this in view, investigations were undertaken to produce low cast concrete by blending various ratios of cement with hypo sludge.

This project is concerned with experimental investigation on strength of concrete and optimum percentage of the partial replacement by replacing cement via 10%, 20%, 30%, 40%, 50%, 60% and 70% of Hypo Sludge.

INTRODUCTION
General
Energy plays a crucial role in growth of developing countries like India. In the context of low availability of non-renewable energy resources coupled with the requirements of large quantities of energy for Building materials like cement, the importance of using industrial waste cannot be under estimated.

During manufacturing of 1 tones of Ordinary Portland Cement we need about 1-1? tonnes of earth resources like limestone, etc. Further during manufacturing of 1 tonnes of Ordinary Portland Cement an equal amount of carbon-di-oxide are released into the atmosphere. The carbon-di-oxide emissions act as a silent Killer in the environment as various forms. In this Backdrop, the search for cheaper substitute to OPC is a needful one. 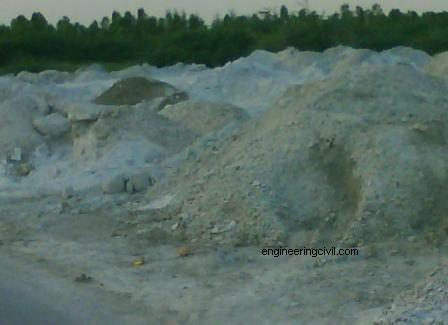 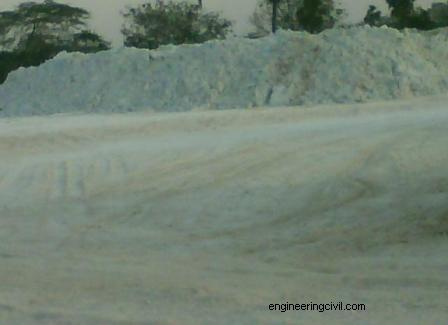 Need For Hypo Sludge Utilization
While producing paper the various wastes are comes out from the various processes in paper industries. From the preliminary waste named as hypo sludge due to its low calcium is taken out for our project to replace the cement utilization in concrete. Due to the cement production green house gases are emitted in the atmosphere. For producing 4million tones of cement, they emit 1 million ton green house gases are emitted. Also, to reduce the environmental degradation, this sludge has been avoided in mass level disposal in land. To eliminate the ozone layer depletion, production of cement becomes reduced. For this, the hypo sludge is used as partial replacement in the concrete as high performance concrete. By utilizing this waste the strength will be increased and also cost reduction in the concrete is achieved.

MATERIALS USED
Cement
The most common cement is used is ordinary Portland cement. The Type 1 is preferred according to IS: 269-1976, which is used for general concrete structures. Out of the total production, ordinary Portland cement accounts for about 80-90 percent. Many tests were conducted to cement some of them are consistency tests, setting tests, soundness tests, etc.

Aggregate
Aggregates are the important constituents in concrete. They give body to the concrete, reduce shrinkage and effect economy. One of the most important factors for producing workable concrete is good gradation of aggregates. Good grading implies that a sample fractions of aggregates in required proportion such that the sample contains minimum voids. Samples of the well graded aggregate containing minimum voids require minimum paste to fill up the voids in the aggregates. Minimum paste will mean less quantity of cement and less water, which will further mean increased economy, higher strength, lower shrinkage and greater durability.

Aggregate comprises about 55% of the volume of mortar and about 85% volume of mass concrete. Mortar contains of size of 4.75 mm and concrete contains aggregate upto a maximum size of 150 mm.

Coarse Aggregate
The fractions from 80 mm to 4.75 mm are termed as coarse aggregate.

Water
Water is an important ingredient of concrete as it actually participates in the chemical reaction with cement. Since it helps to from the strength giving cement gel, the quantity and quality of water is required to be looked into very carefully. 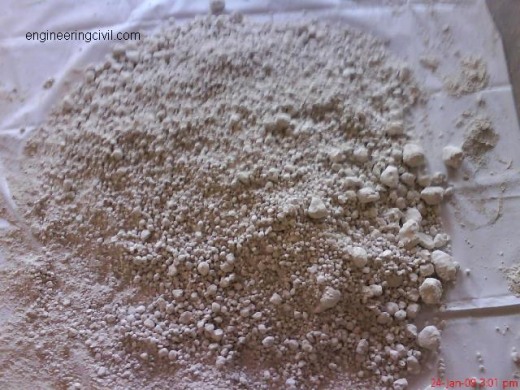 A mix M25 grade was designed as per Indian Standard method and the same was used to prepare the test samples. The design mix proportion is as follows

Fig. No.1 Compressive Strength of Concrete Specimen at 14 – Days 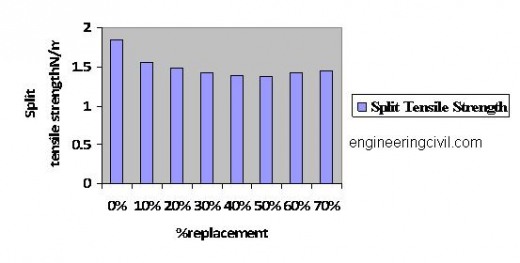 ECONOMIC FEASABILITY
Cost analysis is carried out for the optimum proportion of percentage of hypo sludge in concrete. This project was carried out in our college campus. The cost is compared to the conventional concrete.
Cost Of Materials
Cost of cement per bag = Rs.250.00
Cost of sand per m3 = Rs.867.20
Cost of hypo sludge per kg = Rs.0.50
Cost of coarse of aggregate per m3 = Rs.561.40
(All the rates are include with lead charges)

The compared values of cost show gradual decrement in total cost of per cubic meter concrete. The above table shows cost values up to 30% replacement and the difference in cost from normal concrete to partially replaced concrete was Rs.739.02

CONCLUSIONS
Based on limited experimental investigation on the compressive and split tensile strength of concrete, the following observations are made regarding the resistance of partially replaced hypo sludge.

This report is submitted to engineeringcivil.com so that students can find the research useful and can take help in further research and analysis. We sincerely thanks

Control Of Corrosion on Underwater Piles

I have find it very innovative.pl. Confirm about usage of marble slurry waste available in bulk quantity in our area.

where we will found this hyposludge disposal in hydrabad area

Can I use hypo sludge in concrete tiles whose thickness is 25mm and 60mm and in what proportion.what name do paper industrygives to this hypo sludge.

Can we use hyposludge in RCC Dams and if yes then what will be the optimum replacement of hprosludge ?

this is very usefull concrete for now days for urban areas

MY PROJECT ALSO SAME AS YOURS PROJECT SIR
ONLY THE DIFFERENCE IS YOU HAVE USED HYPO SLUDGE AND I HAVE USED (SILICA FUME, GGBS,FLY ASH,RICE HUSK)

please give some suggestions in increasing the strength of concrete

we are a recycle base paper maker. kindly saw us the uses of our sludge in concrete as well as cement manufacturer co.

SIR PLEASE GIVE REPLY TO MY QUESTION.I NEED SOME MORE INFORMATION REGARDING THE PROJECT THAT YOU HAVE DONE.

SIR PLEASE GIVE RESPONSE TO MY QUESTION

i want some information regading the project sir.please send it to my email id

sir, actually now i’m doing thesis regarding the strength performance of recycle aggregate foam concrete as light weight material. in my study, i hv use wastepaper sludge ash as replacement cement,foam agent and fine recycle aggregate in concrete mix. But i hv a problem to get detail information concerning the design mix of concrete by using all these material..i’m really appreciate if u could share some informatiom wit me..thanks

Your case study is very important and useful.Kindly suggest, can i use hypo sludge in fly ash brick production.Presently i am using 50% flyash 40% sand and 10%lime/gypsum.By using sludge will it be possible to reduce the use of lime.Also tell in what form the sludge should be used ie in wet form/in dry form duly grinded

Where we find these Hypo Sludge in ahemdabad Area

Hello sir.good evening.In this project you had used waste products of peper industry, its quite innovative.I have an idea of using solid waste from sewage treatment plants for preparing bricks.please help me by providing any information regarding it.

hai where i can get this hypo sludge from tamilnadu

where i can get this hypo sludge in GUJARAT….??