Central prestressing is normally required during construction in Incremental Launching method. Why?

Central prestressing is normally required during construction in Incremental Launching method. Why?

The erection condition plays an important role to the structural design of bridges when incremental launching method is adopted.

Each section of superstructure is manufactured directly against the preceding one and after concrete hardens, the whole structure is moved forward by the length of one section. When the superstructure is launched at prefabrication area behind one of the abutments, it is continually subjected to alternating bending moments. Each section of superstructure (about 15m to 25m long) is pushed from a region of positive moment and then to a region of negative moment and this loading cycled is repeated. As such, tensile stresses occur alternately at the bottom and top portion of superstructure section. For steel, it is of equal strength in both compression and tension and it has no difficulty in handling such alternating stress during launching process. However concrete could only resist small tensile stresses and therefore, central prestressing is carried out to reduce the tensile stress to acceptable levels.

Central prestressing means that the prestressing cables are arranged such that the resultant compressive stresses at all points in a given cross section are equal and it does not matter whether tensile stresses occur in upper or lower portion of superstructure during launching process. 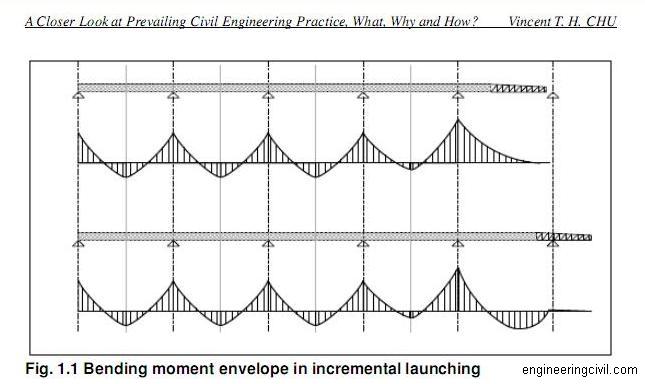 This question is taken from book named – A Closer Look at Prevailing Civil Engineering Practice – What, Why and How by Vincent T. H. CHU.