What is Geopolymer concrete?
Ordinary Portland Cement (OPC), which is the main ingredient for concrete production, contributes about 10% of the global carbon dioxide (CO2) emission. Nearly 40% of the world’s construction sector contributes to global emissions. With the rising number of buildings every year, it is reckoned that only 40% of the infrastructure is built at present and the rest 60% is yet to be built which means more pollution is yet to be faced by the world. Thus, there is a requirement to shift industrial dependency from cement to some other alternatives that are environmentally friendly and effective.

On performing extensive analysis to develop alternate binders for the production of concrete that can help curb the CO2 burden on the planet, geopolymer concrete has appeared as a suitable replacement capable enough to replace the conventional concrete. While testing its properties, it has shown a reduction in CO2 emission in OPC production by 80%.

Regarding the strength, one of the main parameters influencing it is the type of aluminosilicate precursor. Some of the aluminosilicate binders require heat curing, and thereby cost of construction increases. It has been observed that the early strength can be improved by the amalgamation of slag in the geopolymer binder. It has been observed that the geopolymer mortar hydration products are calcium silicate hydrate gel and ettringite. 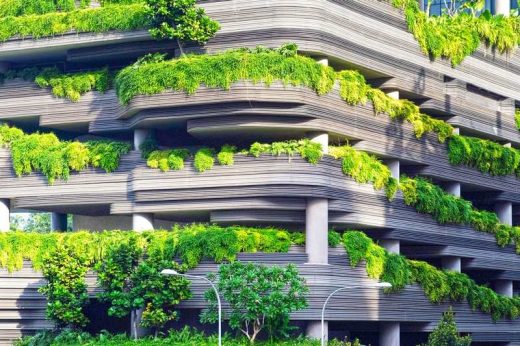 3. When the Ultrasonic Pulse Velocity test was conducted on Geopolymer concrete, all samples’ pulse velocity increased compared to the period. The geopolymer concrete generally has good quality concrete with slight porosity.

4. The decrease in water content allows the Geopolymerization process, which stipulated for an increase of NaOH and Na2SiO3. Thus, it is recommended to have high concentrated molarity or medium and high grade.

5. It was found that Geopolymer concrete, being eco-friendly, exhibits better early strength properties compared to the other composites. By replacing cement, this eco-friendly concrete is much more advantageous and can be beneficial for industries.

Flexural Behaviour
When Geopolymer concrete was combined with fly ash, it showed excellent properties when compared to ordinary concrete. For flexural testing strength, materials required were –

1. Conventional concrete gains 65% of its 28 days strength, but with research on this, it was observed that concrete with a high level of fly ash gains 40% to 50% of its power in 28 days.

2. As aging time increased, the strength of Geopolymer concrete increased even to the extent that it exceeded the capacity of conventional concrete.

4. Geopolymer concrete composites use a waste by-product like fly ash generated in the coal power plants, which prevents the dumping of fly ash from polluting the environment.

Performance Assessment
Regarding performance-wise, industrial wastes such as fly ash, GGBFS, and copper slag when incorporated with concrete mix, it proved to give efficient results that are –

1. In the case of Ground Granulated Blast Furnace Slag (GGBS), the workability of concrete decreases with an increase in GGBFS content due to the increase in angular shaped particles in the concrete mix.

2. In copper slag, as the workability increases, the use of a superplasticizer can be eliminated.

3. This increase in slag content escalates the compressive strength by accelerating the Geopolymerization reaction because of the dissolution of additional silicates.

4. When both fly ash and copper slag are used, geopolymer concrete can be cured at ambient temperature.

5.Geopolymer concrete with fly ash and GGBFS shows higher compressive strength than concrete having a combination of fly ash, GGBFS, and copper slag. Due to high reactive slag particles in GGBFS compared to copper slag, more hydration products are generated for the fly ash and GGBFS mix that fills the porous structure.

With regards to durability, some observations are –
1. In most cases it has been seen that the durability of geopolymer concrete is more than ordinary concrete.

2. Geopolymer concrete has less loss in strength and slight erosion in acid, sulphate, and chloride solution, along with little surface cracklings occurring after high temperature exposure.

3. Geopolymer concrete after carbonation has a lower tendency of reaction and lower mechanical properties mainly due to a higher Ca/Si ratio of C-S-H gel of ordinary concrete.

4. It has been seen that calcium content is mainly responsible for durability in geopolymer concrete. High-calcium alkali-activated systems have similar erosion mechanisms to ordinary concrete due to the resemblance of hydration products, while the degradation of low-calcium alkali-activated systems involves the exchange of ions between network structure and solution. It also involves transformation of pore solution subjected to aggressive environments. Here, the choice of aluminosilicate source materials has a significant effect on durability.

5. Two additions can be used in geopolymer concrete for increasing durability- good compaction (such as the inclusion of various fibers, fine particle, etc.) and another one is to modification in chemical composition (such as the involvement of nano-scale components, biological admixture, etc.).

Table 1: Savings in cost of production for GPC and OPC concretes
Courtesy: International Journal of Civil Engineering Research, Comparative Study on the Production Cost of Geopolymer and Conventional Concretes by J.Thaarrini& S.Dhivya

How does Geopolymer concrete perform as compared to ordinary concrete?

Where can it be used, and where is it recommended?
Geopolymer concrete can be used in pavements, sewer pipes, retaining walls, apron, and taxiway aircraft pavements, and many more. It can be used in places where ordinary concrete is used as it resembles regular concrete in various ways. Because of their excellent heat-resistant properties, they can be used to build fire-resistant homes that provide more safety to the occupants than conventional concrete. It can also be used in water tanks built overhead or underground in case of high-rise buildings.

Conclusion
Geopolymer concrete is new, and not many people are aware of it because of changes in mix design proportions or lack of research. But this doesn’t mean that this concrete is less than any ordinary concrete. It is evident from the above facts that it has more strength and durability than other good properties compared to conventional concrete. The only problem is the cost criteria in lower grade as most buildings in India are usually made of low-grade concrete. This criterion can be achieved by extensive experiments and modifications in the composition or replacing the current ingredients with future ones. Furthermore, it can be added that such concrete could be widely used in the future.

What are various Types of Admixtures?