Sometimes called a forklift truck, the forklift is a powerful industrial truck that is used to lift and transport material by steel forks that are inserted under the load. Forklifts are commonly used to move loads and equipment that is stored on pallets. The forklift was developed in 1920, and has since become a valuable piece of equipment in many manufacturing and warehousing operations.

Types of Forklifts
The most common type of design with forklifts is the counter balance. Other types of designs include the reach truck and side loader, both of which are used in environments where the space is at a minimum. 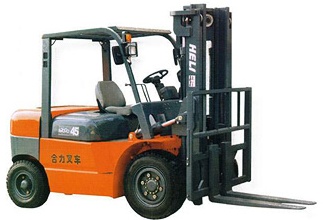 Control and capability
Forklifts are available in many types and different load capacities. In the average warehouse setting,most forklifts have load capacities of around five tons. Along with the control to raise and lower the forks, you can also tilt the mast to compensate for the tendency of the load to angle the blades towards the ground and risk slipping it off the forks. The tilt will also provide a limited ability to operate on ground that isn’t level.There are some variations that allow you to move the forks and backrest laterally, which allows easier placement of a load. In addition to this, there are some machines that offer hydraulic control to move the forks together or further apart, which removes the need for you to get out of the cab to manually adjust for a different size load.

Another forklift variation that is sometimes used in manufacturing facilities, will utilize forklifts with a clamp attachment that you can open and close around a load, instead of having to use forks. Products such as boxes, cartons, etc., can be moved with the clamp attachment.

Safety
Forklifts are rated for loads at a specified maximum weight and a specified forward type center of gravity. All of this information is located on a nameplate that is provided by the manufacturer and the loads cannot exceed these specifications. One of the most important aspects of operating a forklift is the rear wheel steering. Even though this helps to increase maneuverability in tight cornering situations, it differs from the traditional experience of a driver with other wheeled vehicles as there is no caster action. Another critical aspect of the forklift is the instability. Both the forklift and the load must be considered a unit, with a varying center of gravity with every movement of the load.You must never negotiate a turn with a forklift at full speed with a raised load, as this can easily tip the forklift over.

This article was submitted by – Er.  Ankush