ABSTRACT:
With the urge for sustainable, durable and economical construction various methods for designing, developing and constructing structures right from Class I structures like Important service and community structures – Power plants, Reservoirs, Health care centers, Airports to ordinary structures have been developed rapidly in the last few decades.

Along with these construction techniques the reliability of present or proposed structure is determined with various analysis and designing methods for parameters under consideration. One such reliable and effective method is Finite element Method. FEM even if complex and hard for manual analysis but is one of the most efficient method for software programming.FEM method works effectively even for complex structure with efficient results or outcomes.

Such complex structure can be defined complex because of their geometrical shape, composition or development of stresses within them. These strange parameters make many of analysis and designing classical method less efficient as they are developed for conventional structures or cases. One of the example is Circular Presstressing structure like water tank, “Prestressed” word itself makes designing process unusual along with analyzing it for stress and bending moment pattern for same structure before and after designing.

Over here the analysis and designing is done using Finite Element Method for Pestressed Water Tank. For considered grid pattern and assumptions made the results for stress and Bending moment are checked with the analysis and designing method of Indian standard code of Practice: 1343-1980, 3370-III,IV,1965. The aim of the paper is to study the stress pattern for circular prestressed water tank, designing it based on FEM results and to check Finite Element Methods applicability for such unusual construction method. Outcomes obtained after designing and analysis by FEM marked its high efficiency for such structures too.

INTRODUCTION
The finite element method is a numerical analysis technique for obtaining approximate solutions to a wide variety of engineering problems. Although originally developed to study stresses in complex airframe structures, it has since been extended and applied to the broad field of continuum mechanics. Because of its diversity and flexibility as an analysis tool, it is receiving much attention in engineering schools and in industry. In more and more engineering situations today, we find that it is necessary to obtain approximate numerical solutions to problems rather than exact closed-form solutions. Several approximate numerical analysis methods have evolved over the years; a commonly used method is the finite difference scheme. The familiar finite difference model of a problem gives a point wise approximation to the governing equations.

Unlike the finite difference method, which envisions the solution region as an array of grid points, the finite element method envisions the solution region as built up of many small, interconnected sub regions or elements. A finite element model of a problem gives a piecewise approximation to the governing equations Since these elements can be put together in a variety of ways, they can be used to represent exceedingly complex shapes.

Thus Prestressed Concrete water tank is chosen for analysis and design by FEM, since Prestress water tank can be considered as a complex structure because of its construction methodology . Basically Prestressing means inducing the stresses in body or structure of opposite nature. In other words it means that developing the opposite nature stress in initial stage only so as to resist stress developed in working conditions. We are just nullifying the acting and reacting forces or actions. In prestessing we induce compressive forces or stresses in concrete material so that if tensile forces are acting on it the compressive stresses induced initially will nullify total stress effect, keeping structure safe and durable.

SCOPE:
Over here the study is done for Prestress water tank resting on ground .Analysis is done for Stresses, Hoop Tension and Bending moment at various level and faces of tanks as per Grid formation methodology of Finite Element Method.

2) The variational approach relies on the calculus of variations and involves extremizing a functional.

3) A third and even more versatile approach to deriving element properties has its basis in mathematics and is known as the weighted residuals approach.

In this paper Direct approach is taken into consideration.

A. Discretize the Continuum. The first step is to divide the continuum or solution region into elements. A variety of element shapes) may be used, and different element shapes may be employed in the same solution region. In this problem the discretizations is done in the form of 2-D strip with Integral limit 0 to H at base of tank. Since the integral is taken into account each element is 8 noded with interval of H/10 along Y- axis and t along X – axis. Accuracy and approximation depends upon the way and finesse of grid.

B. Select Interpolation Functions. The next step is to assign nodes to each element and then choose the interpolation function to represent the variation of the field variable over the element. The field variable may be a scalar, a vector.The degree of the polynomial chosen depends on the number of nodes assigned to the element, the nature and number of unknowns at each node, and certain continuity requirements imposed at the nodes and along the element boundaries. 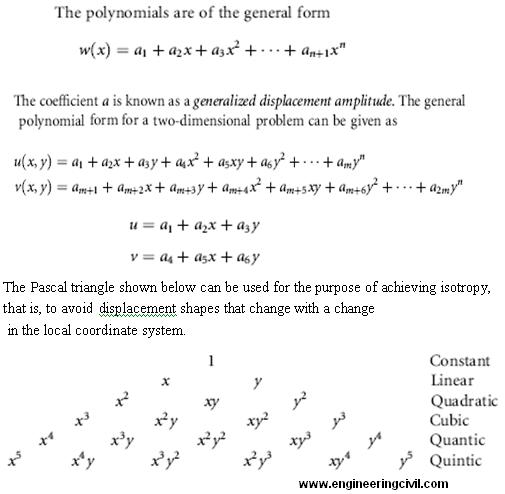 C. Find the Element Properties. Once the finite element model has been established (that is, once the elements and their interpolation functions have been selected), we are ready to determine the matrix equations expressing the properties of the individual elements. Formula below shows the state of stress in an elemental volume of a body under a load. It is defined in terms of three normal stress components sx, sy, and sz and three shear stress components txy, tyz, and tzx. The corresponding strain components are three normal strains ex, ey, and ez and three shear strains gxy, gyz, and gzx. These strain components are related to the displacement components u, v, and w at a point as follows: 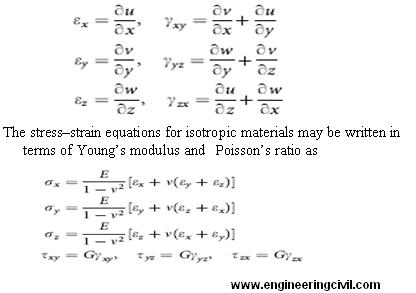 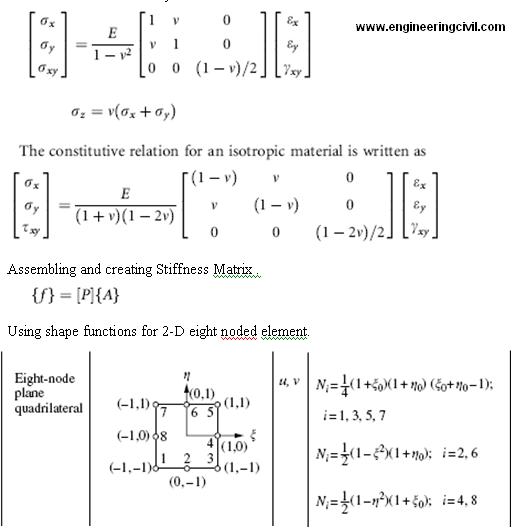 E. Impose the Boundary Conditions. Before the system equations are ready for solution they must be modified to account for the boundary conditions of the problem. At this stage we impose known nodal values of the dependent variables or nodal loads. The potential energy of the external load in the deformed configuration of the element is written as In Equation {Q_} represents concentrated loads at nodes and {q} the distributed loads per unit area. Substituting for {f }T from Equation one obtains 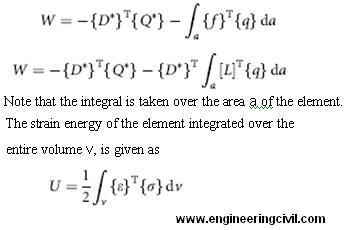 F. Solve the System Equations. The assembly process gives a set of simultaneous equations that we solve to obtain the unknown nodal values of the problem. If the problem describes steady or equilibrium behavior, then we must solve a set of linear or nonlinear algebraic equations. 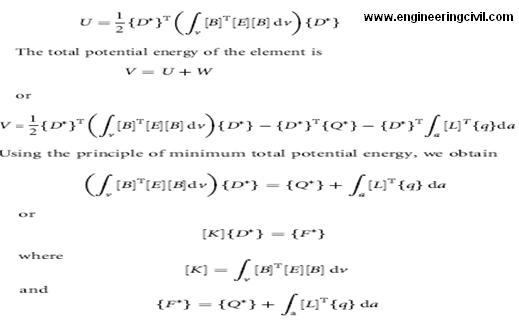 5. RESULTS & DISCUSSION
Example was taken under consideration with Dimensions and material grade as follows-

2) Values of FEM is done as per the Formula and programme made for the element and structure.

6. CONCLUSION:
Results of the analysis done using Finite Element Method gives approximately same values as per the values obtained by classical method given in IS- 3370 Part IV.
Since freedom and flexibility to choose the grid pattern highly affects the accuracy of values obtained.
Over here the mesh was not considered to dense, however more appropriate answers can be achieved by developing fine mesh.

Since unusual geometrical shape and distinct construction methodology structure can be analyse easily as in example above for Prestressed tank, applicability of Finite element Method proves to be effective and efficient

FUTURE SCOPE
Same structure can be analyse by FEM by forming various grid pattern considering 2-D strip element, Axisymmetric –Axiloaded ring element, 3-D parallelepiped element or Shell element. Along with this analysis can be done for composite structure with different material property which will prove to be challenging.

We at engineeringcivil.com are thankful to Sir Abhinandan R. Gupta for submitting this research paper on “Design Of Prestressed Shell type Strucutre using Finite Element Method” to us. We are hopeful that this will be of great use to other civil engineers who are looking forward to conduct a research in this field.

sir thank you for sharing this paper which will help students in their higher studies.

i am a fresh research student i hope this paper will be of great use to me taking interest in research in this area.

sir i am selecting this topic in my seminar presentation