ABSTRACT
This paper comprises of the experimental study of eight double skinned concrete filled steel tubular (DSCFT ) beam columns of concentrically placed circular sections filled with self compacting concrete. Tests on the specimens were made by applying eccentric loads. The main experimental parameters for beam-columns were slenderness ratio and load eccentricity. Testing of specimens investigates the behaviour on load deflection, confinement effect, and the strength of the columns. The experimental observations were shown by load-deflection curves. Various characteristics such as strength, stiffness, ductility and failure mode are discussed. The predicted load versus deformation relationships are in good agreement with beam-column test results. The DSCFT columns in-filled with SCC show good strength and ductility. Modified equations are suggested to find the ultimate compressive strength of DSCFT columns filled with SCC.

1.INTRODUCTION
Cold-formed steel tubular structures are being increasingly used for structural applications. This is due to the aesthetic appearance, high corrosion resistance, ease of maintenance and ease of construction. Hollow columns consisting of two concentric circular thin steel tubes with filler between them have been investigated for different applications. Figure 1 shows the hollow cold formed steel column. 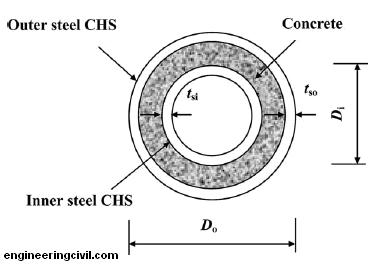 In composite construction, the concrete and steel are combined in such a fashion that the advantages of both the materials are utilized effectively in composite column. The lighter weight and higher strength of steel permit the use of smaller and lighter foundations. The subsequent concrete addition enables the building frame to easily limit the sway and lateral deflections. Hollow column has less self weight and a high flexural stiffness and hence its usage in seismic zone proves promising. It reduces requirements on labor and construction time and maintains the construction quality.

Principle of concrete filled steel composite columns:
Local buckling of the steel tube is delayed by in-filled concrete, steel confines the concrete, concrete in turn prevents the local buckling of hollow steel sections, both due to the restraining effect of the concrete and it also increases the strength and ductility of the section.

PROGRESSIVE LOAD RESISTING CONCEPT OF CONCRETE FILLED TUBULAR COLUMNS (14)
It is the opinion of the many researchers that at the initial stage, the applied load is resisted individually by the steel and concrete elements. That too, the steel sustains larger part of the loading, until yielding. At the early stages of increment of loads, the poison’s ratio of concrete lies far below than that of the steel; whereas, steel tube causes no confinement on the concrete. With the increase in the longitudinal strain beyond a particular stage, an increase in the poison’s effect in the concrete attains, as a result of lateral expansion of the concrete. At this stage, the longitudinal and hoop stresses in the steel plate are becoming equal. Steel plate is bi-axially stressed and concrete being tri-axially stressed the expansion of the concrete takes place more than that of the steel. It is followed by the redistribution of load from concrete to outer steel mainly. At this stage, the steel shows hardening character similar to uniaxial stress-strain hardening.

2. FABRICATION OF COLUMN STEEL TUBES
Steel pipes of different diameter are cut to same height. The two pipes of same height are to be held concentrically by and welded by permanent spacers (welding rods) at both ends. It is used as spacers, connecting both the pipes. These are placed on the plain metal sheet for concrete to be casted into them. The summary of the composite column details is given in Table 1 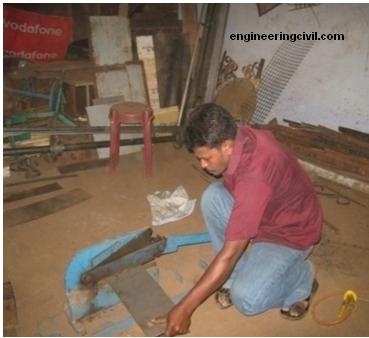 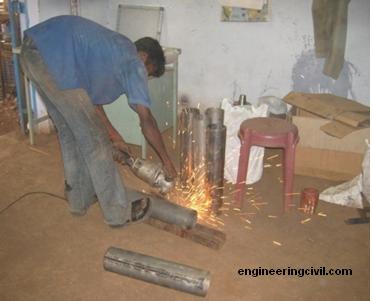 3. CASTING OF TEST SPECIMENS
The self compacting concrete mix used was prepared by mixing the ingredients of measured quantity as given in this table 2 for the desired grade of M30. 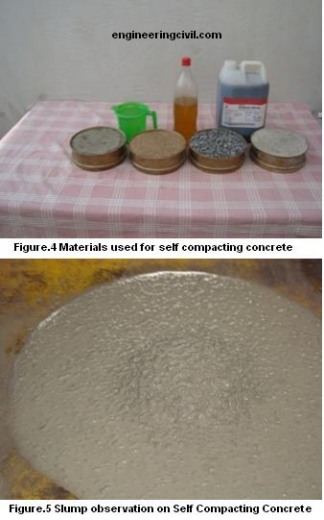 Self Compacting Concrete of 1: 1.39 : 3.1 with w/c ratio of 0.5 of coarse aggregate with maximum size of 6 mm. The companion specimens of three cubes, three prismatic and three cylindrical specimens were made and tested for arriving at the grade of concrete. During preparation of the test specimens, Self Compacting Concrete was pored for filling the annular space between the two concentric steel tubes. For proper filling of the specimens in the annular space, the self compaction was keenly monitored from spilling of the concrete which occurred simultaneously on the circumference of the each of the specimen section. The excess spilled concrete was then neatly and gently cleaned and the specimens were cured for 28 days in controlled humid condition. The specimens were wiped dry and cleaned. The top and bottom surfaces of concrete were inspected for level surface. A slight shrinkage of concrete around 1 to 2mm was noted and the same was filled with plaster of paris, at least three days prior to the testing of the specimens. Painting specimens is done for enabling easy identification of failure pattern. Then, the specimens were subjected to testing.

The entire tests were carried out using 1000 kN electronic universal testing machine. The DSCFT column specimens were hinged at both ends. The specimens were kept at the eccentricity of (e/b=0.2) from the center. This setup is made to achieve eccentricity of the applied load. The test arrangement and instrumentation are shown in Figure 6. An initial load of about 5 KN was applied to hold the specimen to the plumb line. Magnetic type dial gauges were used to measure the deflections at mid span and at 0.2height of the specimens from the end. 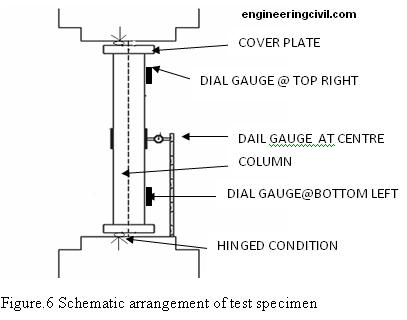 Eccentric compressive load was applied with an increment of 10KN. Each load is kept for around 2 minutes. For each load increment, the deformations were recorded. All specimens were subjected to load up to failure. Each specimen consumed almost 30 minutes for testing. Figure 7 shows the prepared specimens at the loading state.

Almost all columns fail in the same pattern of overall buckling and local buckling of outer steel plate in compression flange in the vicinity of mid height leads the failure. It was followed by the further propagation of local buckling at a distance of almost at equal to the outer diameter of the specimen. It was found that because of the infill of concrete, the tested beam-columns behaved in a relatively ductile manner and testing proceeded in a smooth and controlled way. The enhanced structural behavior of the composite specimens can be explained in terms of ‘‘composite action’’ between the steel tubes and the filled SCC concrete.

Table 3 Geometrical properties of the specimens

5.2 Behaviour Of Columns
This section reports the discussion of test data. To have a comparative study of the failure of HCC columns, their behaviour was studied with respect to local buckling, formation and development of cracks, crushing of compression concrete and yielding of tension steel.

5.3 Variation Of Load With Deflection
Deflections of the specimens at the centre are shown with the applied load P. The load versus corresponding deflection curves were drawn for M30 grade concrete columns and are shown in Figures 8. These diagrams give a better picture of the behaviour of columns. The deflection of all the composite columns increased linearly with the applied load P upto the yield point. Beyond that for a very small increment of load, the beam showed large deformation. The load deflection response curves show that a fairly ductile response was obtained with large deflections being achieved in the inelastic region. The load versus Mid-deflection curves were drawn for M30 grades are shown in fig 9. 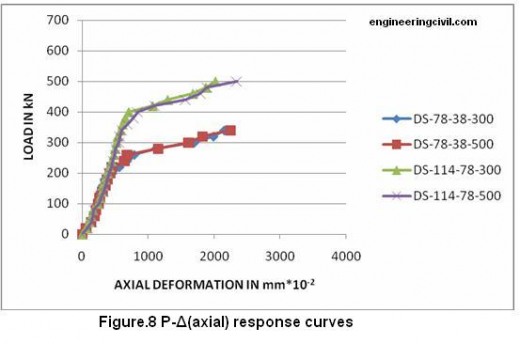 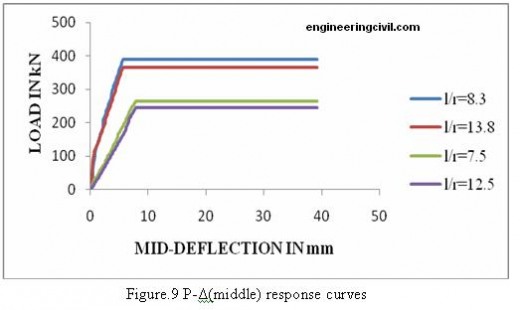 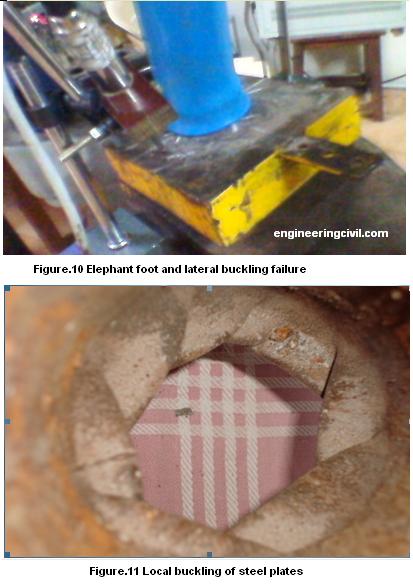 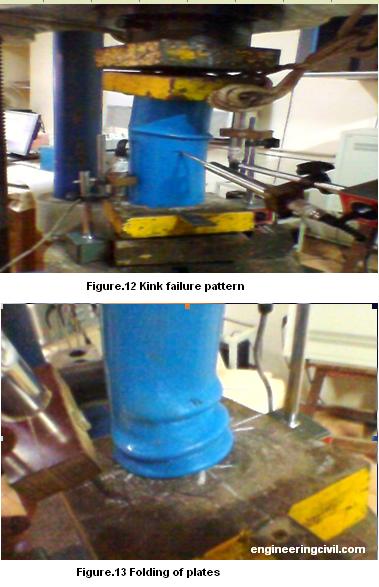 5.5 Theoretical Model
Hollow columns are clearly intermediate between steel and reinforced concrete columns. However, the design philosophy for each of these two structural members is fundamentally different. Steel columns are treated as concentric in that they are loaded through their centroids, but with due allowances being made for residual stresses, initial out of straightness and slight eccentricities of the load. The basis of the design of steel column is instability or buckling, and any moment which act at the ends of the column are then incorporated by reducing the axial load by way of an interaction equation.

The approach for RC Columns is quite different than that for steel columns in that the loads are considered to be eccentric to the centroid. The failure is generally, but not always, attributable to cross- section, material failure, and is based on interaction curve as in IS- 456-2000.

Because of the similarity of hollow columns to both steel and concrete columns, there has been a great deal of debate by researchers as to which approach should be adopted. Short or stub columns are clearly governed by cross section failure, while long or slender columns are prone to buckling. Perhaps the most logical treatment to date is that provided by Euro code. The behavior of hollow columns can best treated by a combination of both approaches.

6.CONCLUSIONS
The following points were concluded from the experimental works carried out:

• The SCC of required characteristic strength is found after trial and error procedure.

• The fresh and hardened concrete tests are performed to determine the rheoplastic properties and the strength properties of concrete.

• The buckling failure can be avoided and the load carrying capacity can be increased by lowering the slenderness ratio for hollow columns and RC columns.

• For the increase of slenderness ratio by 3 the ultimate load decreases by 10.5%.

We are thankful to Sir R.B.KARTHIKA for publishing his research work here on engineeringcivil.com.We hope this research paper will help many civil engineers around the world in understanding the behavior of Hollow Double Skinned Steel Concrete Composite Columns.

This journalgives me usefulinformation on testing and analysis of composite columns. Very much interesting one. Nice work

But perhaps I’m reading it wrong: It looks like so far you have only studied the behavior of relatively short columns. Right?

I’m of course interested in how a column of conventional height fares – say 250cm. Is there some way to interpolate your studies to that length? Perhaps you have indeed done that already and I failed to see it. Or perhaps that is a topic of further study?