ABSTRACT – Civil engineering structures are used for various purposes like residential, industrial, transportation, commercial, etc. and are thus classified into various types. Any of construction project involves huge amount funds been invested in them. As India is expected to be next ruling nation there is great scope for construction industry in coming years. But in recent years there have been great numbers of construction failures which occurred in India which gave rise to utmost need to investigate the causes for these failures and to determine the preventive measures to prevent such failures from occurring in future by taking few learning lessons. The structural and construction safety is still an issue which exists with all the construction projects. This paper emphasizes on the types of failures and responsible causes for constructional failures in today’s construction industry. For this purpose an analyzation of causes of failure of the case study of Toopilipalem sea water intake structure was taken into account. The main aim is to minimize the problem of failure from civil engineering field by taking learning lessons from these devastating incidences.

1.INTRODUCTION
The field of engineering mainly comprises of investigating the solutions for avoiding the failures which the mankind comes across. In it we identify the principle causes for the failure along with the other causes which complement the principle causes along with their respective remedial measures and precautions to be taken prior the failure. There is now a need to understand the various situations or conditions whose existence gave rise to such failures. This job is very important to be done in order to reduce the consequences caused by such failures. In this research the various historical failures were studied along with live case

studies to determine their causes for different types of failure. Failure can be broadly defined under two types which would be erection failure and design failure. Construction failure as” an unacceptable difference between expected and observed performance”. Thus, construction failures would include all those failures caused to the assets at the time of construction or which have collapsed post construction prior to the end of their design life. The main reason behind this is that information related to failures and there causes are kept confidential from the fear of embarrassment and legal issues of Toopilipalem intake structure. The best way to tackle these failures is to fight it by facing them gravely identifying the causes for this and to determine the preventive measures to prevent those failures from occurring in future.

2. FAILURES:
2.1 TYPES OF FAILURE
a. Failure during construction:A failure that was occurred due to improper choice of materials,not adopting proper construction techniques.

b. Failure due to failure of services: A failure was occurred due improper servicing is taken place during construction and after the construction

3.2 CONTROLLABLE CAUSES OF CONSTRUCTION FAILURES ARE AS FOLLOWS:
I. Error in Design- Design error can be easily determined as the design data and all the evidence are all included in the contract documents, i.e. the drawings and specifications. Thus any error committed by the designer or architect can readily is established.

II. Improper Detailing and drafting– The job of proper detailing and drafting acts as an important link between the planning and engineering processes in any of the construction project. Many of the structures which have been properly designed and executed have failed due to poor detailing work. In some of the cases the shop drawings are prepared by persons having non-technical background thus important engineering decisions are taken by nonprofessionals.

III. Improper selection of Materials- In construction industry many types of materials are used from man-made to naturally available materials such as timber, steel, plastic, brick, mortar, glass, etc. most of the times these materials are used without any test or checks to determine whether this material is fulfilling the standard specifications or not.

V .Lack of proper Inspection- The proper execution of the contract as per the requirements and design depends on continuous monitoring the construction process. There are various types of inspection been done such as periodical inspection, spot inspection, progress inspection and full time inspection

VI. Formwork failure- Such type of failure is caused due to improper fixing of formwork or lack of providing proper bracing during erection of form work. The collapse of Sawantwadi fish market slab is an example of formwork failure.

VII. Geotechnical failure- The failure caused due to lack of proper soil investigation done prior to construction of structure, wrong type of foundation provided can result into

settlement of structure, when deep excavations are made near the existing foundation the possibility for settlement is high etc.

IX. Failure Due To Errors- Errors are also committed during the course of the project which are caused unintentionally leading to deviations from correct and acceptable practice and thus can be avoided. There are three basic types of human errors:

i. Errors of knowledge (ignorance)
ii. Errors of performance (carelessness and negligence)
iii.Errors of intent (greed)

X. Maintenance failure- Building maintenance can be defined as: work done in order to keep an existing building in, or restore it to, a condition where it can perform its functions as per plan. It can be divided into:

i. Preventive maintenance -carried out to a predetermined plan to reduce the risk of failure. This can be achieved by:

iv. Corrective maintenance, carried out after failure has occurred.

3.3 UNCONTROLLABLE CAUSES FOR CONSTRUCTION FAILURES ARE AS FOLLOWS:
I.Unpredictable: Unpredictable causes include the failures which are caused due to the accidents such as explosions or an impact caused by a vehicle or aircraft. The collapse of the structure which is caused by hurricane or earthquake which results in subjecting the building to the forces which it has not designed for leading to failure of the building.

4. CASE STUDY OF TOOPILIPALEM SEA WATER INTAKE STRUCTURE:
4.1 GEOGRAPHICAL LOCATION:
Tupilipalem is one of the proposal sites for constructing a major port with the name of Dugarajapatnam Port, along the East coast of India. The study area is geographically located in the southern part of Nellore district, lying between latitude 14°01‘0“ – 14°02‘30“ N and longitude 80°08‘0“– 80°09‘30“E in Andhra Pradesh, India. The study area has a good cover of mangrove swamps. These mangrove swamps are major contributions to the load of organic matter and fine grained sediments. Average annual rainfall in the study area is 1041 mm and the average maximum and minimum temperatures are 39.6 and 20 °C respectively.

4.2 INTRODUCTION OF THE STRUCTURE:
An image of the Toopilipalem sea water intake structure is in figure number 1.it was the dream project of the Late sri M.subba rami reddy.it was proposed to construct to transfer the sea water from the sea to Hatcherys.The proposed structure is stopped in the earlier stage due to lack of funds.

4.3 OBSERVATIONS FOUND IN THE STRUCTURE:
I. There was complete failure of concrete seen on site as the ingredients of concrete were separated and concrete was crushed entirely. This clearly indicated that proper concreting practices were not performed on site.This was shown in figure 2

II. There was a failure in reinforcement at some parts of the structure due to high corrosion rate.. The figure 3 shows the rate of corrosion of the reinforcement

III. This also clearly indicated that proper sieve analysis was not done for design mix which ultimately resulted into poor concrete. There was also presence of cobbles for manufacturing of concrete which could be clearly seen in the figure 4

IV. Concrete was failed due to alkali aggregate reaction, this is due to the presence of alkalis present in the sea water. Due to the site is situated at the region with high humidity with high alkali content.

V. The cover distance is very low, this the reason why the reinforcement got exposed to the environment this is shown in figure 5

VI. There is a spalling of concrete seen in the slab. this is shown in figure 6

5. REASONS FOR FAILURE IN THE STRUCTURE:
Sea water has a salinity of about 3.5%.In this about 78% of sodium chloride and 15% of chloride and sulphate of magnesium.sea water also contains small quantities of sodium and potassium salts.this can react with aggregates in same manner as the alkalies in cement.the use of sea water for mixing concrete does not appreciably reduce the strength of concrete although it may lead to corrosion of reinforcement in this case. there is a corrosion in the reinforcement in this case indicates that during concrete

mixing it was mixed with sea water. the rate of corrosion is increased in this case it was located in high humid and temperature zone. The concrete was not dense and also there is no enough cover this also leaded to the corrosion of the reinforcement.

Concrete exposed to marine environment may deteriorate as a result of combined effects of chemical action of seawater constituents on cement hydration products, alkali-aggregate expansion, crystallization pressure of salts within concrete one face of the structure is subjected wetting and others to drying conditions, corrosion of embedded steel in reinforced, and physical erosion due to wave action and floating objects.

Attack on concrete due to any one of these causes tends to increase the permeability; not only would this make the material progressively more susceptible to further action by the same destructive agent but also to other types of attack. Thus a maze of interwoven chemical as well as physical causes of deterioration are found at work when a concrete structure exposed to seawater is in an advanced stage of degradation.

This accumulation of rust products eventually leads to expansion of steel bars, cracking, and delamination of the concrete cover. Ultimately, the overall strength of the structure decreases and may cause the structure to collapse.

5.2 FACTORS INFLUENCING CONCRETE FAILURE
Concrete quality, porosity, permeability, depth of cover, water/cement ratio, environment, and chloride content are the main reasons for the failure of concrete in the structure.

6. METHODS TO CONTROL CORROSION
6.1 METHODS TO CONTROL REINFORCEMENT CORROSION
Changing the metal potential, Changing the environment, Modifying the metal composition ,Use of non-metallic materials, Protection of reinforcement are the best available practices that are available in present day technology to control the corrosion of the reinforcement.

7. CONCLUSION
Depending on the case study carried out on the Toopilipalem sea water intake structure the prominent causes responsible for failure of structure have been determined. The prominent cause in this case was concrete failure,corrosion and use of non-standard practices on site like improper mixing of concrete, environmental impact, there is no practice of skill full work during the construction, there is no enough cover placement. Thus, there is great need to prevent these causes from repeating frequently by carrying out research in this area and then the causes and reasons must be shared with all the persons from construction field such as architects, contractors, designers, draftsmen, clients and students pursuing civil engineering through seminars, conferences, magazines, manuals and books. An action plan to prevent such failures must be developed for each of these causes in detail. Putting light on this area would help in preventing the occurrence of such failures in future. More committees must be formed to keep a close look on such failures and to disseminate such information to other professionals and students of civil engineering field. 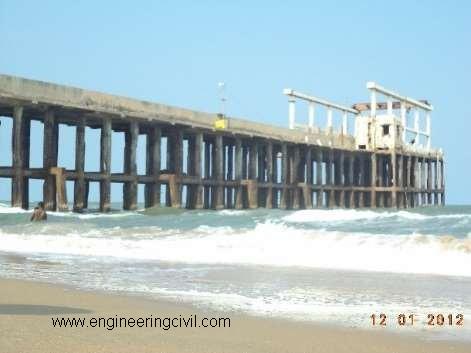 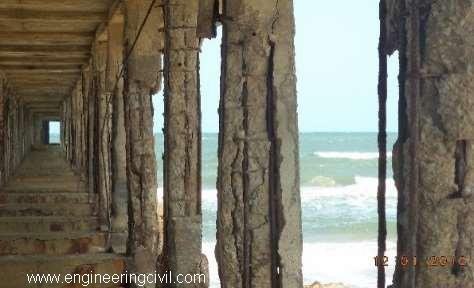 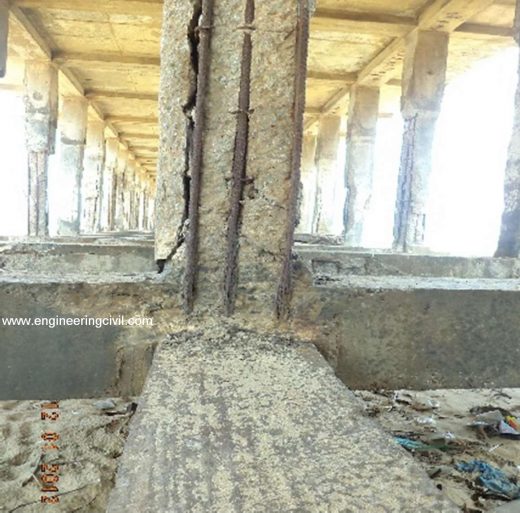 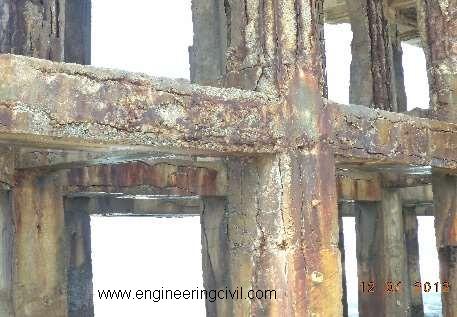 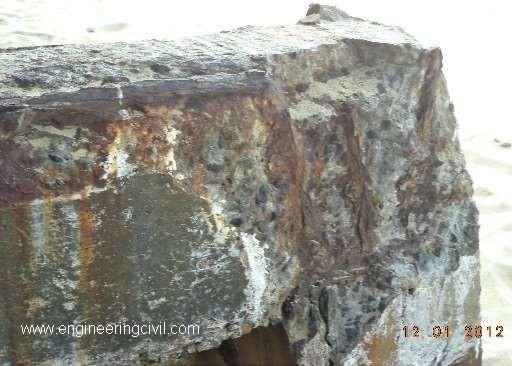 We at engineeringcivil.com are thankful to “SIVATEJA VANUKURI” for submitting this useful paper to us. We hope this would help many engineers who are seeking information on related topics.