Abstract
To perform travel demand estimation for any city using conventional four step demand modeling, it would involve lot of time and resources. As of now, to understand the travel demand for a particular city using available parameters there are no ready reference models are available. Considering this, an attempt has been made in this paper to model the travel prediction using the readily available parameters. About six models were developed utilizing various parameters such as Population, Average Household Income, Road Network Length and area of the city. The models developed were validated by conducting the households’ surveys in two Cites Durgapur and Gwalior. Among the six models developed, the predicted values based on Population and City area are very close to the observed values of Durgapur and Gwalior cities.

1. INTRODUCTION
During the decades of the 1960s and1970s, urban transportation planning techniques were developed to evaluate alternative transportation systems for entire regions. The same techniques were also applied by many agencies to non-regional issues such as site development, corridor analysis, and localized system changes. Large computers, considerable data for both model calibration and application and personnel with highly specialized expertise in Computers and modelling were required to utilize these planning techniques. Therefore, the procedures were costly, time-consuming, and not always responsive to the needs of decision makers. Moreover, they required modification and adaptation for a wide variety of applications. Obviously, a need existed for less complex and more suitable procedures.
The increasing population in urban areas has resulted in increased travel demand thus leading to traffic congestion, environmental degradation and other infrastructure related problems. When a transport system gets overloaded due to excess travel demand, its efficiency could be improved by providing additional capacity in the form of new modes of mass transportation or through demand management. This can be achieved by studying the travel behavior with reference to choice of commuters in choosing the mode or in other words by ‘Mode cope with demands. The problems and difficulties associated with moving about within the cities and towns Choice Modeling’. Further, the existing transportation systems are requiring expansions to of developing economies are more complex and faced daily by urban dwellers. To address this, the relevant solutions pertaining to the application of transport planning process in general and Travel Demand Management (TDM) in particular can be evolved in order to alleviate problems such as congestion, delay, accidents and environment. It goes without saying that after the application of different TDM options it is essential to evaluate its effectiveness by conducting ‘before’ and ‘after’ studies in order to obtain the best possible solution in terms of efficiency, equity and environment so that informed decisions can be taken. Keeping the above aspects points in mind, the principle objective of the study was to develop Quick Response Techniques (QRT) for travel demand estimation aimed at applying for small and medium and cities in India.

2. METHODOLOGY
The following sections describe the Methodology adopted in this study for fulfilling the objectives of the study and the same is presented in Figure 1.The different tasks involved are listed below.
• Collection of data relating to traffic flows on strategically selected links of the urban road networks in India. Collection of details regarding Per Capital Trip Rate (PCTR), Household Trip Rate(HTR), purpose of the trips, mode split, route choices etc.
• Collection of data on influencing parameter includes population, population density, vehicle occupancy, socio-economic characteristics (Income, sex, age, educational levels, vehicle ownership, occupation etc.) Network characteristics (Type of road and length etc.)
• Estimation of passenger flows on the links of road network as per the modes of travel.
• Employing different techniques available such as Artificial Neural Networks (ANN) etc. to develop models, which relate passenger / vehicular flows, PCTR and HTR with one or more of the above said influencing parameters.
• Validation of the models for their suitability and practicality by selecting one or two typical cities in India for which data is available from secondary sources / primary sources. 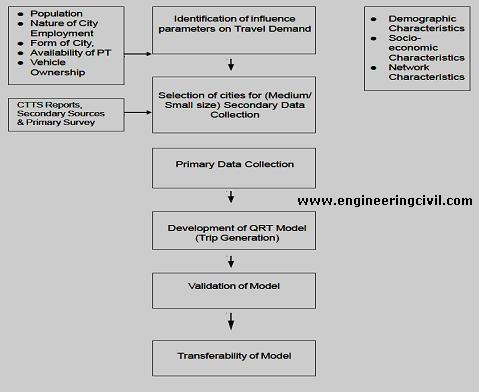 2.1 Models from Secondary Data
Table 1 depicts the secondary data collected for about 23 cities for developing trip generation models using Quick Response Techniques. The various parameters collected include population, average monthly income, total area of the city, and total road length of the city, average monthly expenditure on transportation, average vehicle ownership and per capita trip rate of the city. Based on the secondary data collected, the trip generation models were developed.

Table No.: 1 Secondary Data Collected For About 23 Cities for Developing Trip Generation Models

Table 2 presents the trip generation models along with statistical analysis. For each model, different combination of parameters were used to arrive at the best possible model for the estimation of PCTR and brief narrative description of the models is given in Table 2.

3.1 TRAVEL DEMAND PREDICTION AND VALIDATION
The developed models were validated by using the primary data collected in the above two cities. Table 3 presents the comparison between the predicted and observed values through different models. From this table, it can be observed that model 1 and model 6 are able to estimate PCTR to a reasonable degree of accuracy. The salient features of the developed models have been discussed briefly below:

Table 3: Comparison of PCTR between Model and Observed Values

• For prediction of PCTR, Avg. Household income was taken from field observations. The average income reported may not truly represent the avg. income of city because of incorrect/refusal of information about income by households during the survey.
• The road length parameter observed to be negative because the road length may not have direct impact on the trips performed. It may be due to less (about 30-40) percentage of trips performed by cars, buses and autos in small and medium sized cities.
• For developing QRT models, the secondary data was collected for 23 cities. The regression coefficient is less because of wide variation in city characteristics like population varying from 2-15 lakhs, different land use characteristics like industries &business, tourist places and shape of development.
• Probably if we select samples within close group of population, size and type of development, the regression coefficient may increase. But because of the available samples are less, in this study, all samples were taken for model development.
• It was observed that maximum number of trips in Durgapur mainly was work trips (55%) and educational trips (30%) whereas Gwalior has got recreational trips (20%). This implies the area characteristics of both cities.
• The predicted values from model 1 & model 6 are very close to the observed values of Durgapur and Gwalior cities. Other models were predicting more trips than observed trips may be because of the Average household income used in the models for predicting trips may not exactly true because of incorrect information by households.

4. CONCLUSIONS
To perform travel demand estimation for any city using conventional four step demand modelling, it would involve lot of time and resources. As of now, to understand the travel demand for a particular city using available parameters there are no ready reference models are available. Considering this, an attempt has been made in this paper to model the travel prediction using the readily available parameters. About six models were developed utilizing various parameters such as Population, Average Household Income, Road Network Length and area of the city. Among the six models developed, the predicted values from model 1 and model 6 are very close to the observed values of Durgapur and Gwalior cities. Other models were predicting more trips than the observed trips and this may be attributed to the Average household income used in the models for predicting PCTR. As can be noted from the PCTR models, the average household income was taken from field observations. However, the reported average income may not be true representative of the prevailing income levels of the household in the candidate cities surveys and this may be due to incorrect information provided by households on their income during the survey. Furthermore after observing the developed models it would be more appropriate to classify the cities which are having similar demographic and socio characteristics to predict the travel demand estimation reasonably well.

We at engineeringcivil.com are thankful to Prof. Madhuri K. Rathi and Mr. Patil Vivek Prabhakar for submitting the research paper on “Quick Response Technique For Travel Demand Estimation In Small & Medium Sized Cities In India” to us. We are sure this will be of great help to all those seeking more information regarding this project.