ABSTRACT
Harm in adaptable asphalts happen because of the development of overwhelming vehicles and change in climatic conditions. The primary parameters that cause the damage of the asphalt layer are fatigue
cracking and rutting. Cracking can be prevented by maintaining specified temperature during the process of preparation of mix to laying of bituminous mixes. In this way, to keep the rutting, the groove safe blends like Stone lattice black-top also called STONE MATRIX ASPHALT (SMA) must be utilized as a part of the bituminous layers. In this undertaking SMA is chosen to check its execution in all viewpoints, for example, stability (kg), deformation (mm), , volume of voids in mineral aggregates(VMA), with the expansion of fillers. The utilization of mechanical by-items utilized as fillers enhances the building properties of STONE MATRIX ASPHALT (SMA) mixtures. The expanded solidness because of the expansion of the filler is spoken to by an expansion in the softening point, viscosity, stability, and resilient modulus, and also abatement in entrance or decrease in penetration. In this venture the distinctive fillers like glass powder, magnetite (iron pellets), cement kiln dust, and filler fly fiery debris or filler fly ash have been utilized. All out 12 sets of test examples were set up by utilizing distinctive sorts of filler having diverse sum in the mixture. The Marshall properties got for the fillers uncover that, flyash remains filler, examples have been found to display higher stability contrasted with glass powder, cement kiln dust, magnetite. What’s more, magnetite filler indicated least deformation at 6 % bitumen content and the rate of air voids were observed to be diminished with the expansion of bitumen substance.

INTRODUCTION
Stone Matrix Asphalt (SMA) is a gap-graded mixture, have a better stone to stone contact which gives better strength to the mixture. In this research work aggregate used as per the MORTH specification was taken from a same lot. The samples are made with aggregate with different gradation, filler (cement) and binder (bitumen 80/100). Fibers are used as stabilizer. Fibers are used to decrease the drain down and to increase the strength and stability of the SMA Mix. The test of the SMA Mix samples are done in Marshall Apparatus. Here the comparison of SMA Mix with and without fiber was done. All the research work done before by using cellulose fiber, synthetic fiber, polypropylene fiber and polyester fibers. Cellulose fibers are extensively used in SMA in Europe and USA. These fibers are patented. The fires improve the service properties of the mix by forming micromesh in the asphalt mix to prevent the drain down of the asphalt so as to increase the stability and durability of the mix. Here we have tried to use sisal fiber which is more economic than cellulose fibers, doing same work as cellulose fiber. Cement Kiln Dust (CKD) is a fine-grained strong material created as the essential by-result of the generation of concrete. CKD comprises basically of calcium carbonate and silicon dioxide which is like the concrete furnace crude food or cement kiln raw feed, however the measure of soluble bases, chloride and sulphate is normally impressively higher in the dust.

METHODOLOGY
The tests on bitumen has been directed to know the properties, for example, Ductility (84 cm), Softening point for bitumen (52 ºc),Penetration esteem (8.4mm), Grade of bitumen ( 80/100) and tests on total has been led to know its properties, for example, toughness(11.08%),Abrasion(18.38%) by utilizing the aggregate impact test and abrasion test has been carried out. Total Gradation is taken according to MORTH. As per sizes the strainers or sieves are kept all together and total is sieved. As indicated by weights computed according to the degree, totals are blended in the different container. According to the figuring absolutely 1080 g (90%) of aggregate total (1200g) has been considered. 5 % of Cement (60 g) after sieved in 90 microns sifter has been considered alongside every one of the fillers. Twelve examples of bituminous blend were compacted by giving 75 blows both sides, the Marshall Stability estimation of that example shows the specimen indicates its resistance to deformation under applied load and the flow value indicates the extent of deformation it undergoes due to loading. Twelve marshal dependability tests were readied with the above four sorts of fillers, by taking their substance as (5%,6%,7%).Finding the estimations of a few angles, for example, security, distortion of bituminous blends, alternate viewpoints, for example, VMA, VTM has been ascertained for every one of the twelve specimens.

REVIEW OF LITERATURE
Total 15 sets of test specimens were prepared by using different types of filler having different amount in the mix. The Marshall properties obtained for both types of fillers reveal that, brick dust filler specimens have been found to exhibit higher stability value compared to cement and stone dust filler specimens. In addition, mixers containing brick dust filler showed maximum stability at 6.2% bitumen content and the percentage of air voids were found to be decreased with the increase of bitumen content (Syed Ashik Ali, 2012). In this exploration glass powder is proposed as a contrasting option to customary lime stone powder (Gubraa) and standard Portland concrete fillers in hot black-top blends. Where, the impact of utilizing waste glass powder as mineral filler on Marshall Properties of hot black-top solid blends is examined. Nine blends with three sorts of fillers (lime stone powder, customary Portland concrete and glass powder) and three filler substance (4%, 7% and 10% by weight of aggregate total) are explored. The principle result of this exploration is the likelihood of utilizing glass powder as filler in hot black-top solid blends. The ideal glass powder substance is 7%. Where it is found that utilizing of glass powder as filler with such substitution prompting produce black-top blend with higher steadiness (% of expansion up to 13%), lower stream (% of decline up to 39%) and lower thickness (% of diminishing up to 10%) contrasting with comparing common Portland bond or lime stone powder blends (Dr. Hassan H. Jony, 2010). Despite the fact that exploration has demonstrated the plausibility of utilizing CKD, and particularly LKD, in lieu of business hydrated lime as a mineral filler, couple of organizations have been included in testing or field trials. Three states have reported some examination on the utilization of CKD for use as mineral filler (Arizona, New York, and Utah), and stand out state (Utah) has explored the utilization of LKD for this application. Some utilization of CKD as a mineral filler in parkway black-top cement has been accounted for in Italy where both the execution and Marshall properties of black-top blends with CKD filler were accounted for to be great, at expansion rates that are practically identical to that for business hydrated lime (around 6 percent). The lime segments of the CKD and LKD can help with advancing stripping resistance. In this application, these cleans can be utilized to supplant hydrated lime or fluid ant stripping operator (User guide lines for waste and byproduct materials in pavement construction).

RESULTS
The connections between binder content and the properties of blends, for example, stability, flow, voids in mineral aggregate (VMA), unit weight, and voids in total mix (VTM) for every blend as a part of the Marshall Mix plan strategy were produced. Tables 1 to 4 demonstrate the blend outline information got for the three blends. The graphical representations are as appeared in Figures 1 to 4. 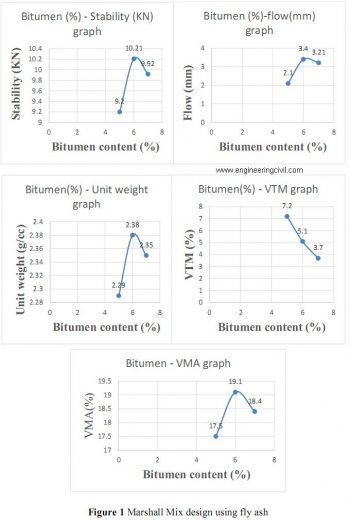 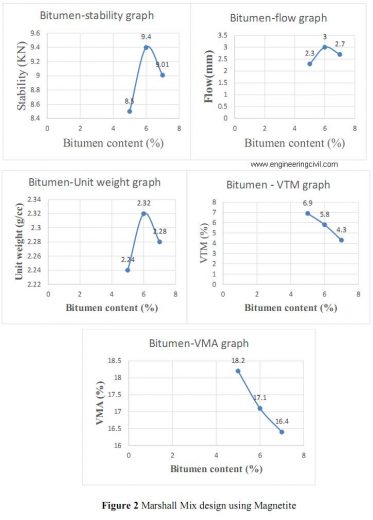 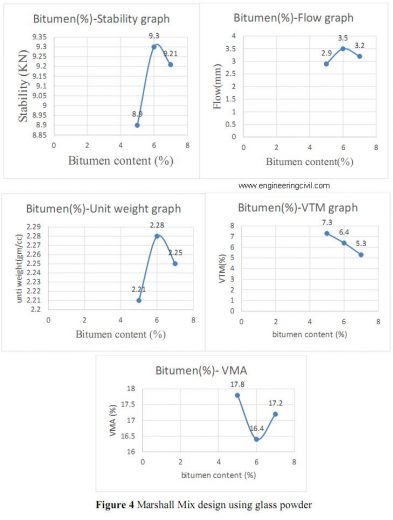 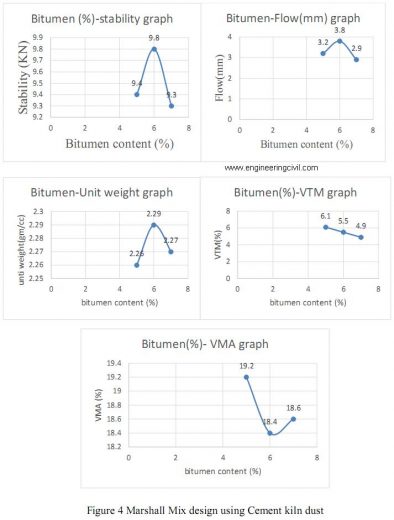 CONCLUSION
All out 12 sets of test examples were set up by utilizing distinctive sorts of filler having diverse sum in the mixture. All fillers that has been tested in this experiment are suitable for Marshall Design. The Marshall properties got for the fillers uncover that, flyash remains filler, examples have been found to display higher stability contrasted with glass powder, cement kiln dust, magnetite. What’s more, magnetite filler indicated least deformation at 6 % bitumen content and the rate of air voids were observed to be diminished with the expansion of bitumen substance.

We at engineeringcivil.com are thankful to “G.H V SAI SIMHA” for submitting this very useful paper to us. We are hopeful that this will be of great use to all civil engineers across the world.