1.0 INTRODUCTION
Asphalt is mixture of mineral aggregate and binder usually bitumen. Bitumen is a heavy, dark brown to black mineral substance, one of several mixtures of hydrocarbons(James and Nobel, 2006). Bitumen is a strong, versatile weather and chemical-resistant binding material which adapts itself to a variety of uses. Bitumen binds crushed stone and gravel (commonly known as aggregate) into firm, tough surfaces, termed asphalt, for roads, streets, and airport run-ways. (Asphalt Construction Handbook. 6th ed. Barber-Greene, A Division of Caterpillar Paving Products Inc., 1992.)

The Asphalt production for decades; has been produced in the hot mix (HMA), at 160o C temperature with sophisticated equipment (asphalt plant) making the established company to be sole producer of the product(Bindra, 2001). This high temperature serves to decrease viscosity and moisture during the manufacturing process, resulting in a very durable material but the risk of production is very high. HMA is most commonly used for high-traffic areas, such as busy highways and airports(Gurcharan, 2004). The recent evolution in road technology has made it possible to produce asphalt in warm and cold form (APAA, 1994)

Warm mix asphalt concrete (WAM or WMA) reduces the temperature required for manufacture by adding bitumen emulsions, waxes, or zeolites. This process benefits both the environment and the workers, as it results in less fossil fuel consumption and reduced emission of fumes. In cold mix asphalt concrete, the bitumen is emulsified in soapy water before mixing itwith the aggregate, eliminating the need for high temperatures altogether(Noble, 2005). However, the asphalt produced is not nearly as durable as HMAC or WAM, and cold mix asphalt is typically used for low traffic areas or to patch damaged HMAC.(Niki Foster, 2010) what are different types of asphalt, Google search). The cold technology is new in the market and there is need for its authenticity of the properties before adopting for the used in Nigeria. Though this work has shown that the product is produced at temperature of about 60oC and laid at ambient temperature, the product on production does not produce hazardous gases which mean; it’s environmentally friendly and can be stored for a very long time

The gain of producing cold mix asphalt with DPWS modified bitumen will be
(i) be an addition, to existing list of probable bituminous materials, and the accompanying literature as new contributions to existing data on same.

(ii) generate a model that will assist designers on better ways by which bitumen mixture can be produced with some hitherto wastes of packaging product.

(iii) free the environment from the flying polyethylene bags, which before now are among the main sources of non-degradable environmental nuisance and impediment to free flow of water in drainage.

(iv) in economic terms, reduce the consumption rate for the bitumen, which is substantially an avenue for foreign reserve depletion.

(v) reduce the rate of oxidation of bitumen, since it may act as buffer solution in the chemical degradation of bitumen on exposure to the open atmosphere of a completed road pavement; and

(vi) eventually create job opportunities for the hitherto unengaged residents in the collection of these flying polyethylene bags and propels meaningful participation in a ‘waste to wealth’ programme.

2.0 MATERIAL AND METHOD
Table 1 shows the material used to produce the cold mix asphalt with the DPWS modified bitumen and the other types of cold asphalt sourced from the market in Nigeria. Their source and physical properties as well as their compositions are briefly indicated in the table.

2.1 Marshall Test and Characterization of the Properties of the Mixes.
(a) Marshall test Specimens Production.
Test Marshall Samples were produced according to the Marshall methods for bitumen mixes. In this test, some amount of aggregates, not less than 1,200g in weight was placed in the Marshall mould and compacted with the 75 blows on each side of the specimen, using 4.54kg compacting rammer falling through 457mm unto the top and bottom of each specimen. As stated earlier four different materials were to be used for this experiment as can be seen in table 3.1, on each material 6samples was produced totalling24samples. The mould containing the material was removed from the compacting machine and then taken to the extruder and the compacted sample was extruded out of the mould. The density of the compacted material was achieved after 24hours of cooling, by weighing in air and suspended in water. The numerical differences in the two weights are the volume.

The density is calculated by dividing the weight in air by the volume. Three samples of each material were placed in water basin, heated to 40ºC for the duration of 30 minutes that the sample continued to be in it while three samples of each material were air-dried for 3 days. All the samples were then placed in the Marshall Stability testing machine to measure the load at failure, the Marshall stability while the rate of deformation (flow) was read directly from flow gauge. The stability read from the gauge was appropriately corrected.

b) Extraction,Sieve Analysis and Specific gravity
i) The percentage bitumen/binder content is the amount of binder present in an asphalt mixture which is otherwise known as extraction test, this is important because other relevant result relies on the bitumen content of the mix. The percentage bitumen content of the various samples was determined as follows:

ii) In sieve analysis, a sample of a dry aggregate of known weight is separated through a series of sieves with progressively small openings. Once separated, the weight of the particles retained on each sieve is measured and compared to the total sample weight.

Particle size distribution is then expressed as percentage retained by weight on each sieve size. The results are usually in tabular or graphical format

3 RESULTS AND DISCUSSIONS
3.1 Results
Presented in figure below is the gradation result for all sampled cold Asphalt: 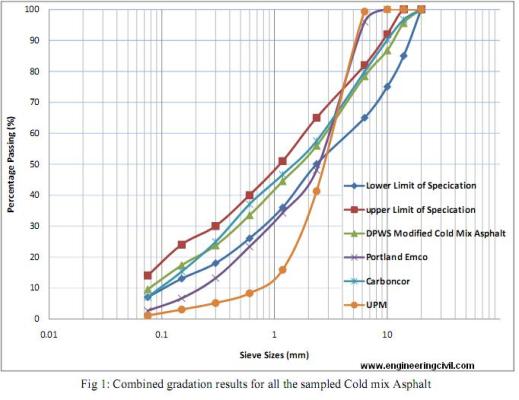 Bitumen Content
The bitumen contents of the samples were calculated as follows:

Comparison of strength properties
The table below shows the stability and flow values for the various cold mix asphalts and the standard specification. Some tests could not be done on some samples of UPM due to the poor nature of the sample.

3.2 Discussion of results
i) Sieve Analysis
The sieve analysis chart as presented in fig 1,for the four asphalt samples under consideration, shows that the DPWS modified cold mixasphalts gradation comprised of adequate fines and coarse particles and lies perfectly within the grading envelop as specified by the Nigerian General Specification (FMWH, 1999), this situation also applied to carboncor cold asphalt. The Portland Emco cold asphalt gradation shows too much fines particles while the coarse particle was found sparsely in the mix, the U.P.M Cold asphalt, from physical observation and the sieve analysis,it could be said that the asphalt contains a single type of aggregates on sieve 2.36mm, no fines and no coarse particles which makes the binding of the asphalt difficult.

ii) Bitumen content
The bitumen content of the asphalt are presented on table 2, this results shows that all the asphalt did not comply with the Nigerian General Specifications (FMWH, 1999) recommendation for the hot mix, but from the literature studies, a specification of 1% -10% was given,making the DPWS asphalt and U.P.M to fall within the specified range while Portland Emco and Carboncor asphalt are slightly beyond the range of specification (Transportation Research Board, Washington, DC. 2006)

iii) Specific Gravity
Shown on table 3,isthe specific gravity of the aggregates that makes up the asphalt, all of them are within the specification for crushed aggregates, as specified by BS 812 (1973)

iv) Marshall Test
Tables 4 and table 5show the strength properties of the various samples of cold mix asphalts at two different test methods as compared with standard for hot mix asphalts. Table 4shows the strength properties for normal asphalt test method, while table 5shows air-dried asphalt method of testing, which is where the samples exhibited their highest stability values.

v) Stability
The stability values of the various cold mix samples as seen on table 4 and 5shows that DPWS Modified cold mix Asphalt, Portland and Carboncor samples met the standard specification for hot mix and the UPM sample could not meet the standard specification. While the DPWS Modified cold mix Asphaltand Carboncor samples had stability value far above the minimum requirement (see table 4), the UPM sample stability value could not be tested, using the normal method however 1KN was obtained when air dried.

All the above may suggest that there may be the need for new standard to be created for cold asphalt which is gradually gaining itsway into the Nigerian market.

The above values shows that the DPWS asphalt is the heaviest, which is closely followed by the Portland Emco and then by the carboncor asphalt while UPM seem to be the less dense asphalt.It was also observed that Cold mix asphalt gain more strength in air than in hot water this was evidence from the result of stability obtained in table 4 and 5. Furthermore judging from physical observation it was noticed that the aggregates in the UPM sample are not well distributed as their sizes are too close to each other. The samples could not meet all the requirements as contained in the Nigeria General Specifications for hot-mix asphalt.

The best method of curing in cold mix asphalt is by air-drying. Surfacing with low flows and high stability will not deform easily but are likely to be brittle, while those with low stabilities and high flows deform easily under traffic. The stability is a function of both the inter-particle and the binder frictions.

4.2 Recommendation
Based on the laboratory tests and analysis obtained from the comparison of the various cold mix asphaltsas compared with hot mix standard, the following recommendations were drawn, Aggregates for cold mix asphalt should be well distributed with different aggregate sizes. Air-drying should be used as a method of curing in cold asphalt. Cold mix asphalt is better used on medium and low traffic roads due to the time it takes before hardening.10

It is also recommended that new standard be introduced for could mix asphalt instead of using the standard of the hot mix.

It is also recommended that the cold mix asphalt should be used for minor jobs like maintenance and repair because they take a little time to gain their full strength because of the additives.

We at engineeringcivil.com are extremely thankful to Er. Kolo Stephen Sunday for sharing his research on A Comparison Of Marshall Properties Of Various Types Of Cold Mixes Found In Nigeria. We hope this will help many students specially of Nigeria in understanding about the properties of various products in Nigeria and will also be helpful in future research.

This is superb, it has made a huge impact in my research and study