Home Highway Engineering
When are the conditions which warrant the installation of safety barriers along roads?

In general there are several main conditions which warrant the installation of safety barriers along roads:

(ii) It avoids the crossing over of vehicles over central median.

Untensioned corrugated beam is commonly used for road bends where radius of curvature is small as the use of untensioned beam does not require tensioning device. It is designed to deform in beams and to re-direct impacting vehicles on a course as close as possible parallel to the barrier.

0 Comments
What is the difference between safety fence and safety barrier?

A safety fence is intended to absorb some energy caused by hitting vehicles and to realign the vehicles to move parallel to the safety fence.

A safety barrier is intended to provide containment instead of energy absorption upon hit by vehicles. Hence, it is anticipated to have little deflection and deformation only. After crashing, it serves to re-direct the vehicles along the line of barrier.

Concrete crash barriers are not considered as the best barrier design because of the following reasons when compared with flexible barriers:

(i) Concrete barriers possess rough surface which, when impacted by moving vehicles, tend to cause considerable damage to the vehicles.

(ii) Since concrete is a rigid material and the deceleration of collided vehicles is comparatively large when compared with flexible barriers.

However, concrete crash barriers have particular application in locations where the deflection of barriers is not allowed. For instance, in the central divider of a carriageway, if flexible barriers are adopted and vehicles crush into the barriers, the deformation resulting from the hitting of vehicles would result in an intrusion to the adjacent carriageway. This is undesirable because this may trigger further collisions in the adjacent carriageway and hence rigid barriers like concrete crash barriers should be adopted in this scenario.

1 Comment
What are the advantages of having corrugation in crash barriers?

The layout of corrugated beam barriers is that the beams are corrugated in the longitudinal direction so that it provides higher lateral stiffness with a thinner material. Moreover, the distance of beams posts and crashing vehicles are considerably increased.

In case the beam barriers are tensioned, it is intended to create a stiff beam erected on relatively weak posts. During vehicle collision, the posts would be separated from the beams and there would be lesser deceleration experienced by the vehicles. 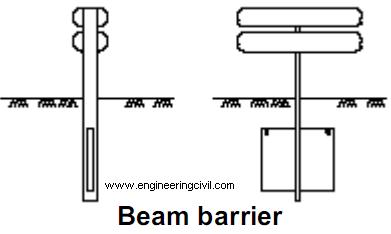