Deflections of Bents and Shear Walls 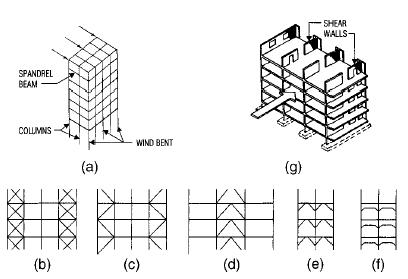 Figure showing Building frame resists lateral forces with (a) wind bents or (g) shear walls or a combination of the two. Bents may be braced in any of several ways, including (b) X bracing, (c) K bracing, (d) inverted V bracing, (e) knee bracing, and (f) rigid connections.

For a shear wall with a concentrated load P at the top, the deflection at the top is 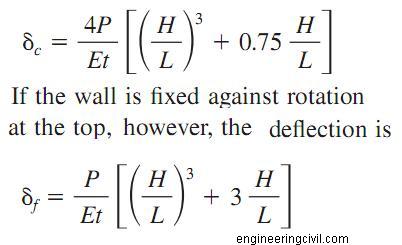 Units used in these equations are those commonly applied in United States Customary System (USCS) and the System International (SI) measurements, that is, kip (kN), lb /in 2 (MPa), ft (m), and in (mm).

Where shear walls contain openings, such as those for doors, corridors, or windows, computations for deflection and rigidity are more complicated. Approximate methods, however, may be used.

Types of Stones used in the Construction

Different Types of Arches in Construction

One comment on "Deflections of Bents and Shear Walls"

Greeting, may i know where this formula came from? British Standard? What are the clauses?
Thanks You.