Abstract:– Bridge construction today has achieved a worldwide level of importance. Bridges are the key elements in any road network Use of box girder is gaining popularity in bridge engineering fraternity because of its better stability, serviceability, economy, aesthetic appearance and structural efficiency. The structural behavior of box girder is complicated, which is difficult to analyze in its actual conditions by conventional methods. In present study a two lane simply supported Box Girder Bridge made up of prestressed concrete which is analysis for moving loads as per Indian Road Congress (IRC:6) recommendations, Prestressed Code (IS: 1343) and also as per IRC: 18 specifications. The analyzed of box girder using SAP 2000 14 Bridge Wizard and prestressed with parabolic tendons in which utilize full section. The various span/ depth ratio considered to get the proportioning depth at which stresses criteria and deflection criteria get satisfied.

I. INTRODUCTION
Prestress concrete is ideally suited for the construction of medium and long span bridges. Ever since the development of prestressed concrete by Freyssinet in the early 1930s, the material has found extensive application in the construction of long-span bridges, gradually replacing steel which needs costly maintenance due to the inherent disadvantage of corrosion under aggressive environment conditions. One of the most commonly used forms of superstructure in concrete bridges is precast girders with cast-in-situ slab. This type of superstructure is generally used for spans between 20 to 40 m. T or I-girder bridges are the most common example under this category and are very popular because of their simple geometry, low fabrication cost, easy erection or casting and smaller dead loads. In this paper study the India Road Loading considered for design of bridges, also factor which are important to decide the preliminary sizes of concrete box girders. Also considered the IRC:18-2000 for “Prestressed Concrete Road Bridges” and “Code of Practice for Prestressed Concrete ” Indian Standard. Analyze the Concrete Box Girder Road Bridges for various spans, various depth and check the proportioning depth.

II. FORMULATION
A. Loading on Box Girder Bridge
The various type of loads, forces and stresses to be considered in the analysis and design of the various components of the bridge are given in IRC 6:2000(Section II. But the common forces are considered to design the model are as follows:

Dead Load(DL): The dead load carried by the girder or the member consists of its own weight and the portions of the weight of the superstructure and any fixed loads supported by the member. The dead load can be estimated fairly accurately during design and can be controlled during construction and service.

Live Load(LL): Live loads are those caused by vehicles which pass over the bridge and are transient in nature. These loads cannot be estimated precisely, and the designer has very little control over them once the bridge is opened to traffic. However, hypothetical loadings which are reasonably realistic need to be evolved and specified to serve as design criteria. There are four types of standard loadings for which road bridges are designed.
i. IRC Class 70R loading
ii. IRC Class AA loading
iii. IRC Class A loading
iv. IRC Class B loading

The model is design by considering IRC Class A loading, which is normally adopted on all roads on which permanent bridges and culverts are constructed. Total load is 554, the Fig.1 show the complete details of Class A. 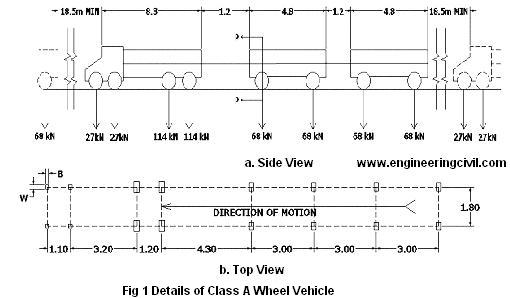 Other information regarding Live load combination as per IRC:6 2000 Clause No.207.1 Note No.4

B. Thickness of Web
The thickness of the web shall not be less than d/36 plus twice the clear cover to the reinforcement plus diameter of the duct hole where‘d’ is the overall depth of the box girder measured from the top of the deck slab to the bottom of the soffit or 200 mm plus the diameter of duct holes, whichever is greater.

D. Thickness of Top Flange
The minimum thickness of the deck slab including that at cantilever tips be 200 mm. For top and bottom flange having prestressing cables, the thickness of such flange shall not be less than 150 mm plus diameter of duct hole.

E. Losses in Prestress
While assessing the stresses in concrete and steel during tensioning operations and later in service, due regard shall be paid to all losses and variations in stress resulting from creep of concrete, shrinkage of concrete, relaxation of steel, the shortening (elastic deformation) of concrete at transfer, and friction and slip of anchorage.

F. Calculation of Ultimate Strength
Ultimate moment resistance of sections, under these two alternative conditions of failure shall be calculated by the following formulae and the smaller of the two values shall be taken as the ultimate moment of resistance for design:

i. Failure by yield of steel (under-reinforced section)
Mult = 0.9dbAsFp
Where,
As = the area of high tensile steel
Fp = the ultimate tensile strength for steel without definite yield point or yield stress or stress at 4 per centelongation whichever is higher for steel with a definite yield point.
db = the depth of the beam from the maximum compression edge to the centre of gravity of the steel tendons.

ii. Failure by crushing concrete
Mult = 0.176 bdb2fck
Where,
b = the width of rectangular section or web of beam
fck= characteristics strength of concrete

b = width in the case of rectangular member and width of the rib in the case of T, I and L beams
d = overall depth of the member
fcp = compressive stress at centroidal axis due to prestress taken as positive.

III. ANALYSIS AND DESIGN OF POST-TENSIONED DECK TYPE BOX-GIRDER BRIDGE
A post- tensioned deck type Box – Girder
Bridges of clear span 30m and width of roadway is 7.5m. Assume Live Load as per IRC: 6-2000 vehicle is passing over deck given in chapter 4 and table no. 4.2. The Bridge analysis for different L/d ratio starting from 15 to 20 and different L/d ratio considered are as follows: 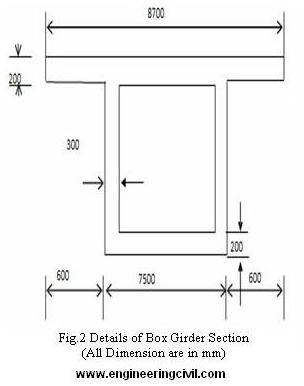 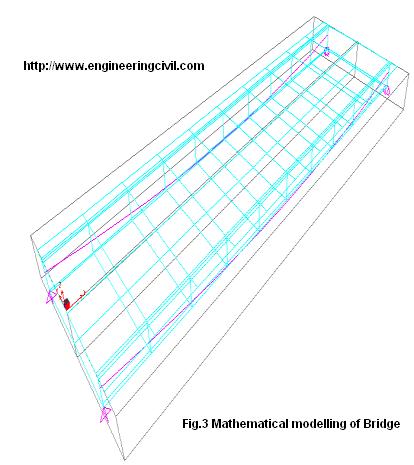 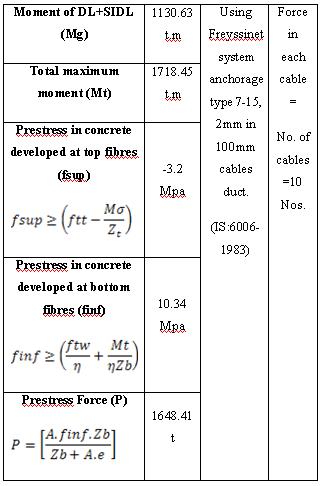 Table.7 Calculation of Stresses at top and bottom fibre 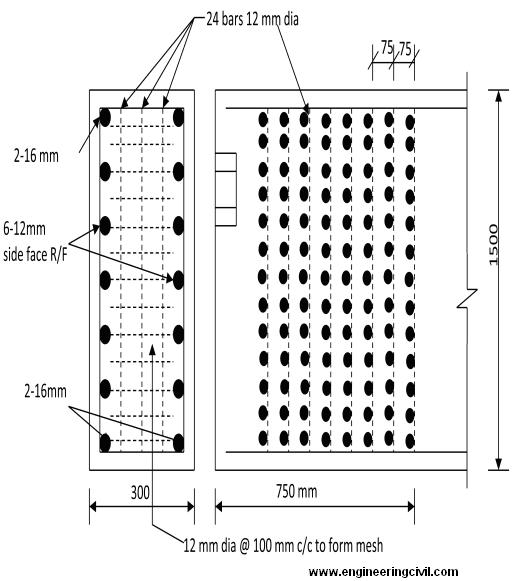 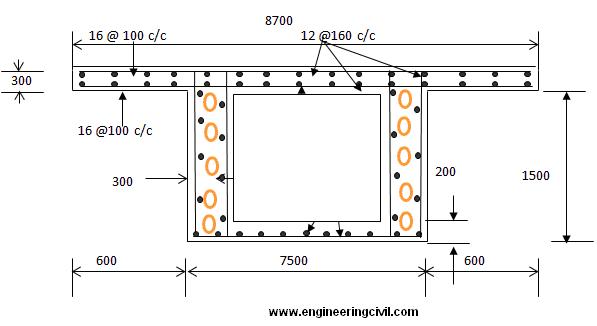 IV. COMPARSION OF RESULT FOR VARIOUS SPAN/ DEPTH RATIO
The comparison of prestress force, deflection and stresses values are obtained for various span/depth ratio ( table no. 10 & 11) for box girder bridge. The values are calculated as per IS:1343-1980.

V. CONCLUSION
This paper gives basic principles for portioning of concrete box girder to help designer to start with project. Box girder shows better resistance to the torsion of superstructure. The various trail of L/d ratio are carried out for Box Girder Bridges, deflection and stress criteria satisfied the well within permissible limits. As the depth increases, the prestressing force decreases and the no. of cables decrease. Because of prestressing the more strength of concrete is utilized and also well governs serviceability.

It is very useful information for design engineers especially Bridge Design engineer.I shall be thankful if you could send me the Excel sheets for this design as I intend to use it in near future.Thanks and regards
Engr. Hameed A Sheikh

I find it very interesting and knowledgeable.
Kindly send more information,Excel sheets and other relevant details
Thanks
Sharma RL

It is very useful information for design engineers especially Bridge Design engineer.I shall be thankful if you could send me the Excel sheets for this design as I intend to use it in near future.Thanks and regards
Engr. SHOAIB AHMED

It is very useful information for design engineers especially Bridge Design engineer.It will be more helpful if the the Excel sheets for this design is attached.With thanks and regards
Engr. Md.Nurul Amin

Found very Good information. But is it possible for Under and Over pass Box Culvert For P Sc Box girder.

It is very interesting and knowledgeable.
Please, could you kindly send more information,Excel sheets and other relevant details
Thanks and regards
Engr. Emeka Duru