To counter any effect of a surcharge on retaining wall on a cohesionless soil or an unsaturated cohesive soil we need to apply a uniform horizontal load of magnitude KAp. This load is applied over the entire wall height.

In case of saturated cohesive soil, the entire surcharge value acts on the entire wall height. This is considered to be a uniform load acting horizontally.

1 Comment
What is the Water Pressure Retained by Retaining Walls?

2 Comments
What is Lateral Pressures In Cohesionless Soils?

The lateral pressure in cohesion less soils is given by following formula:-

Following terms are used in the formula given below 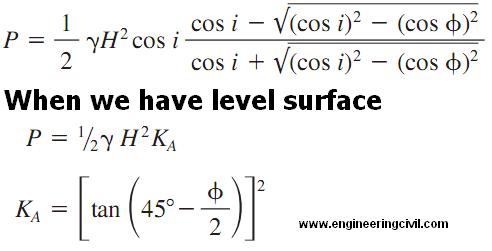 2 Comments
What is the Lateral Pressure In Soils?

We know that The Rankine theory of lateral earth pressures is the most widely used theory to find the lateral pressure which is acting on retaining walls. But this theory has some assumptions which we need to know before hand.

Assumptions in the Rankine Theory of Lateral Earth Pressures
1) The pressure on the back of a vertical wall is the same as the pressure that would exist on a vertical plane in an infinite soil mass.
2) Their is no Friction between the wall and the soil.

What is the Lateral Pressure of Cohesive Soils?

Physical soil properties include specific gravity, density, particle size and distribution and water content.
The water content represented by w of a soil sample is defined as the weight of free water in the sample expressed as a percentage of its dry weight.

n=Vv/V
where n is the Porosity defined as the ratio of void volume to the total volume V of soil.
END_OF_DOCUMENT_TOKEN_TO_BE_REPLACED